Round 7 Draft: One Day Fly vs. Angstschreeuw

When Noah Boeken won the European Championship last year it heralded a new era in European Magic: the Dutch had arrived and they were here to stay. This first draft of the second day was a perfect example of that. In the first table the only two undefeated teams, two of the three Dutch teams that made it to the second day, cross paths in what is without doubt another signal of the great amount of Magic talent in the Netherlands.

After a long period of waiting, mostly because of a schedule problem that resulted in www.revised4th5th.com arriving half an hour late. After the judging staff cleared the problem, not without some comments, Kamiel finally got to open the first booster.

Team Rochester drafting, is very different from the normal drafts. You must work as a team and build a deck to play a single round against a certain deck, that you see during the draft. That often leads to heavily metagame decks, with a lot of creatures with protection against certain colors or a lot of color specific spells.

That booster, in what would set a trend for the first packs, had no obvious bombs. It did, however, have three tappers. That's right, three tappers! One of each: Stormscape Apprentice, Thornscape Apprentice and Benalish Trapper. Kamiel took the Blue and Jelger the Green while Menno ignored the annoying things and grabbed a Shivan Zombie. Jos took the Trapper and Bram a Green card.

Tom's wheel was impressive: Recoil and Pouncing Kavu. Surprisingly this set the drafting colors for the first few packs. Menno was rewarded with a Ghitu Fire in one of his team's booster, still giving Jos a Glimmering Angel and Bram a Tribal Flames. During one of the next review periods Snepvangers flipped over a card and pointed at the mana symbols to signal to his teammates that he intended to dip into Black as well.

Jos opened a Charging Troll, that he took giving Bram a Keldon Necropolis, Menno wheeled a Kavu Aggressor and a Kavu Climber after Kamiel grabbed a Glimmering Angel. So after those few picks the table looked something like this: 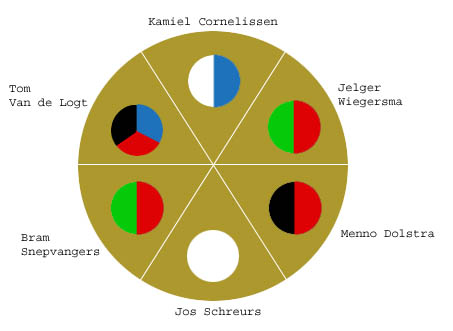 Then Tom went into Recoil mode getting his second and third and decided it was high time someone opened a big rare, apart from Menno's Ghitu Fire. So he opened a Blazing Specter. This increased the good mood at the table with the always smiling six Dutches playing around as Jos and Bram tried to cover the Blazing Specter or convince Tom to pick the Agonizing Demise.

Still he stay true to his obvious pick and took the Blazing Specter. One the next booster Bram was faced with a tough decisions: should he pick the Soul Burn or let the other team take it? For a brief moment the signaling went berserk with Bram wanting to take the card and his two teammates trying to convince him to take a Pouncing Kavu. Then they all settled and let Bram have his way.

And it was a good thing they decided to do that because he then found a further reason to dive into Black when he got an Agonizing Demise. That signaled Black as his third color and a good complement to the array of small Green and Red creatures that he had been gathering.

Keeping with his Ghitu Fire start Menno then opened a Nightscape Master and grabbed it amongst laughter from the whole table. Jelger would not be outdone and opened a Phyrexian Infiltrator that he handed out to Tom. Kamiel was also in the same mood and got a Nishoba as he opened the first Planeshift booster.

Planeshift was also very kind to Menno who got the biggest round of applause when he opened a Flametongue Kavu despite having to pass a Magma Burst and Cavern Harpy to the opposing team. Their colors where now all about set and they were smoothly decided their picks with little problems.

Bram Snepvangers was destined to suffer during the whole draft having to counterdraft a Cavern Harpy to keep the bouncing troublemaker from the other side of the table. After the Soul Burn dilemma he was again involved in another when he opened a Questing Phelddagrif, while drafting a Green-Red-Black deck. Much discussion ensued with Bram finally taking a Sparkcaster to the mild despair of his teammates. The Phelddagrif ended up in Kamiel's pile which later gained another rainbow monster: Ertai, the Corrupted. 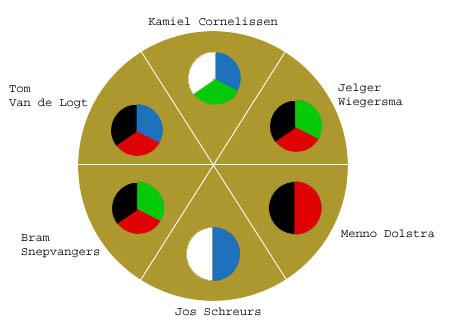 And these were the highlights of their decks: