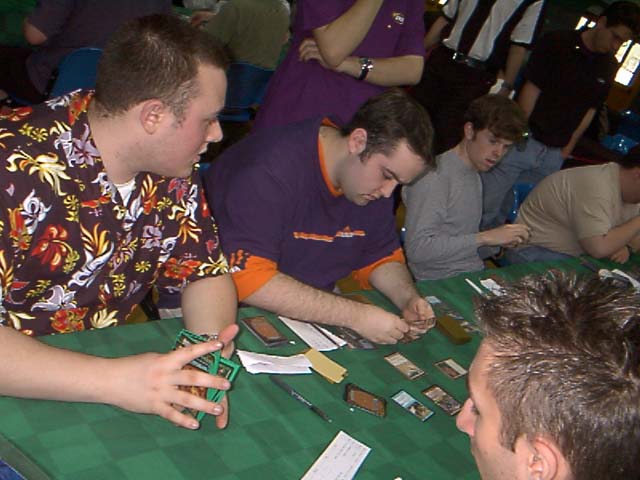 Team Clegg is a pro team coming from all different spactrums of the USA, where Bologna Demolition Team is a good local team with some PT experience.

Team Clegg won the flip and chose to start. The first pack that Parker opened was very weak with the only good cards being Benalish Trapper and Pouncing Kavu and Parker took the Trapper with Clegg taking the Pouncing Kavu and the Italians took Yavimaya Barbarian, Slinking Serpent, and Cursed Flash and Szigeti took Macical Rage. Second pack was very good with Clegg opting to take Trench Wurm instead of the Armored Guardian which went to Giusti in the middle with Betti taking Zap and Paselli taking Nightscape Apprentice. The draft went accordingly to the strategy of many where the middle player plays the W/U/x deck, the player to the left plays R/B and the other one plays R/G/x. Many good cards where opened, like two Flametoungue Kavu for Clegg and Szigeti, a Rith and a Namata for Betti and a second Namata counterdrafted by Giusti.

After the draft was over I think the Americans had the adventage with Clegg playing R/B with Flametoungue Kavu, Terminate and a decent creature base with a decent mana curve. Where on the other hand Paselli had a deck full of good removal but lacking the creature quality and he only had 2 creatures at casting cost 2.

Parkers deck was great with 2 Galinas Knight, 2 Benalish Trapper, 3 Tower Drake, 3 Aura Griffin, Fairie Squadron and Silver Drake with 2 Repulse and cards whom are great in the mirror like 2 Barrins Unmaskins, Pledge of Loyalty, and the Judgement card whom gives protection to all creatures for the types of lands you have. Giustis deck was also good with Armor Guardian, Stormscape Battlemage, Probe, Fact or Fiction, and Doomsday Specter.

The Betti, Szigeti match was quite even with Betti's deck featuring Namata and Rith and Szigeti deck a 5 color green deck full of solid cards like Armadillo Cloacks, Flametoungue Kavu, 2 Tribal Flames, Urzas Rage and many solid green creatures. His Blue and Black where Teferis Moat, Slay, Hunting Drake, and 2 Darigaazs Charms. If Szigeti dosent get mana screw he should be in good shape but you never know. 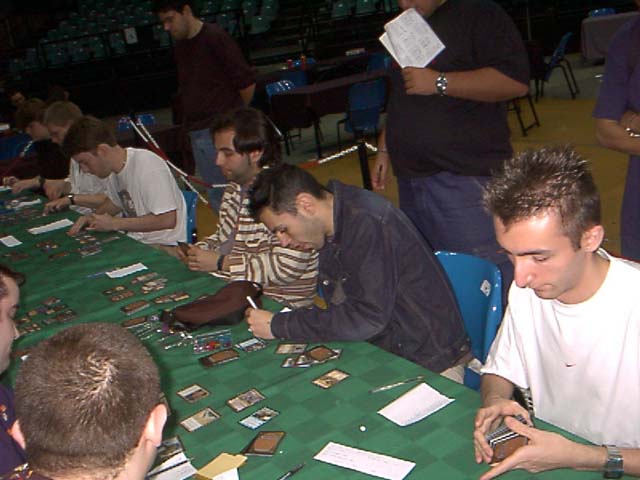 The game was pretty fast and surprising enough Cleggs match was over first, there wasnt really anything to say with cleggs deck always playing crreatures the first few turns of the game and Paselli couldnt do anything till turn 4. By the times the Italian would cast anything and start any type of defence or offence Clegg was ready with Flametoungue Kavu.

Betti has a wonderful start with Yavimaya Barbarian and Pincer Spider with Thornscape Battlemage with Horned Kavu to gate by the fifth turn. Szigeti meanwhile stalled at 3 mana for a few turns and Betti to add insult to injury casted Riths Charm on a land. I quote Szigeti " I lost with the best hand in Magic". Game 2 was quite different for Szigeti, he was mana flooded and the only two spells he cast where Harrow and Hunting Drake while Betti had 4 green guys on the board. On turn 6 Szigeti plays Moat and it seems like the rush was over but to say the least Betti was ready with tranquility.

This match was quite fun and interesting to watch, Parker mulliganed and his hand was quite good with him playing 3 creatures in the first 4 turns by the time Giusti stabilized the board he was starting at a Galinas Knight with Pledge of Loyalty on it at 11 life. 6 turns later the game was over. The second game started the same way with Parker going aggro and Giusti gained control with Fact or Fiction, Probe, and Stormscape Battlemage. Two turns later he played Doomsday Spectre gating the Battlemage and Parker succumbed to the kickers ability. The third game once again started very fast and furios from Parkers side and a key disrupt on Exclude kept the momentum going for the American. Once again the italian has the Battlemage in hand but found the swamp a little to late.

The match ended in good sport with both teams wishing each other good luck.