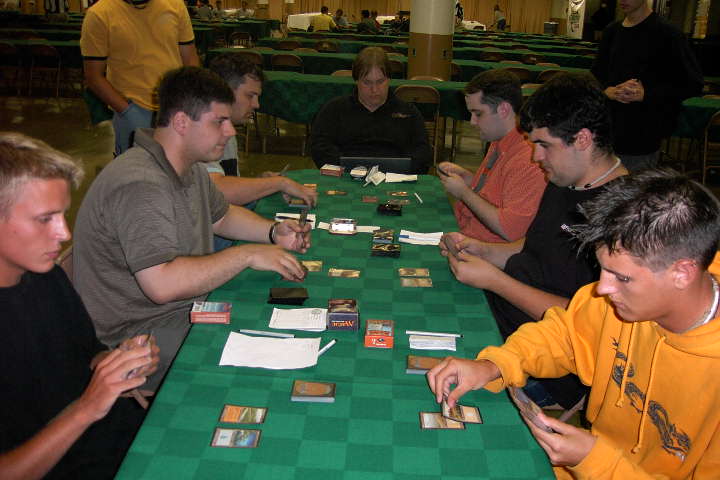 O-men vs. Huey, Brock, and Linde

For years now, the center of Pittsburgh Magic has been the Original Hot Dog Shop located in the Carnegie Mellon University student center. Known affectionately as "The O," it has been visited by Magic players from around the world and everyone of them has been wowed by the size of the french fries (one order feeds a large family, or one maybe two Magic players) and the quality of the magic that is played there, on the back tables. Ron Kotwica, Nathan Heiss, and Mike Patnik have been regulars there for years and named themselves after this beloved establishment for Grand Prix Columbus. The O-men took of Huey, Brock, and Linde in the seventh and final round of day 1, with the winner being in great shape for day 1 and the loser forced to cross their fingers and hope for a tiebreaker miracle. At 17th and 18th place coming into the round, anything but a win was likely to eliminate either team.

All three match-ups turned out to be mirrors. Black-red in seat A, 5-color green in the middle, and blue-white splash whatever was left over in seat C. (Both teams departed from the status quo move of having control in the middle - this will be an interesting aspect of the format to keep an eye on during the draft because control beats aggressive green "grizzly bear" decks, but it loses to 5-color specials full of bombs.) 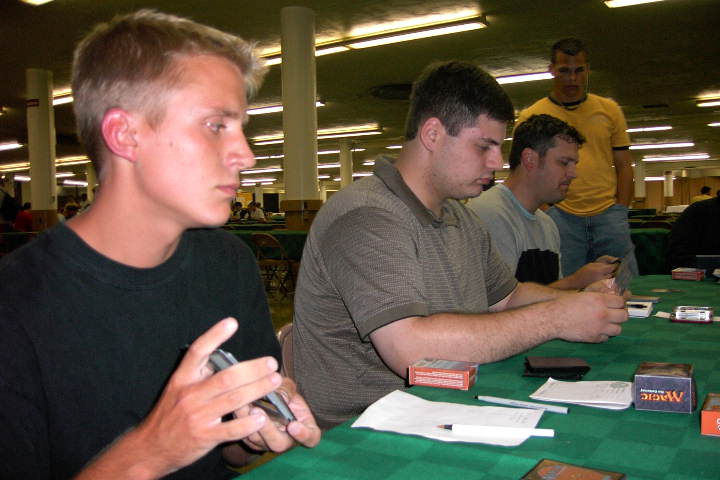 Billy "Baby Huey" Jensen got off to a great start against Heiss when he used a doubly kicked Thornscape Battlemage to kill a Kavu Recluse that was enchanted by Bloodfire Infusion and a Sparring Golem. Heiss never recovered and was still muttering about "that savage Battlemage" at the end of the game. Matt Linde and Brock Parker each also took game 1. Kotwica turned to me before game 2 and claimed his sideboard for the mirror match was amazing.

Jensen continued to wreck Heiss's dreams, pointing Temporal Spring at a land that was enchanted with Fertile Ground. Huey seemed to apologize when he finished Heiss off with Zanam Djinn and Ancient Spider saying "my deck is really good." Kotwica struck back moments later, though, Zapping away Parker's Tsabo's Assassin. Kotwica then enchanted his Nightscape Familiar with Quicksilver Dagger. Parker winced as he played his answer - Urborg Shambler! Kotwica drew a card as a response, but his board was suddenly clear while Parker had Loafing Giant, a 4/3 Shambler, and a Rogue Kavu. The two players traded creatures and removal for a few turns, playing one kicked Magma Burst each and Kotwica threw Planar Despair in for good measure. That left just Parker's Loafing Giant in play. It knocked Kotwica don to 4 and then he drew Urborg Skeleton. Suddenly the game was stalemated. 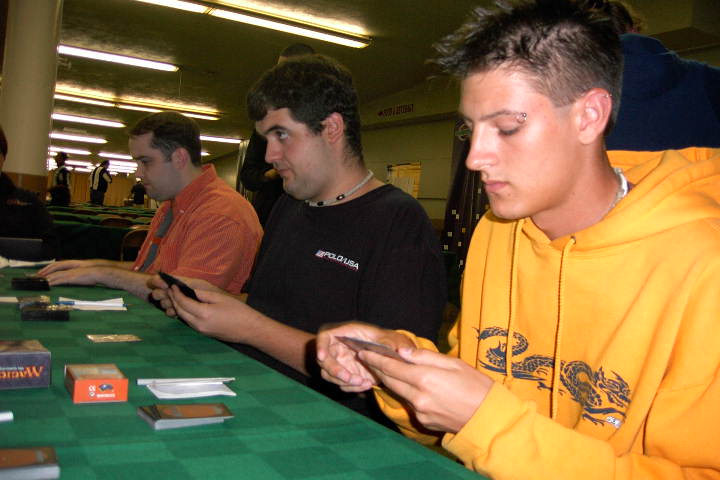 Meanwhile Linde had all the answers against Patnik. Exclude your Voice of All. Dromar's Charm your Sabertooth Nishoba. Tap your attackers. My Flagbearer means you can't cast the Cloak that's in your hand. Linde eventually drew an attacker - Angel of Mercy - and the end seemed to be in sight.

Parker drew a Halam Djinn and sent the team, but Kotwica had just drawn an Agonizing Demise. That flurry sent the players into top-deck mode again. Soul Burn for 4 was a good top-deck by Parker - game and match to Huey, Brock, and Linde. A few minutes later, Linde finished off the 3-0/6-0 sweep.