Round 7: Potato Peach vs. AlphaBetaUnlimited.com 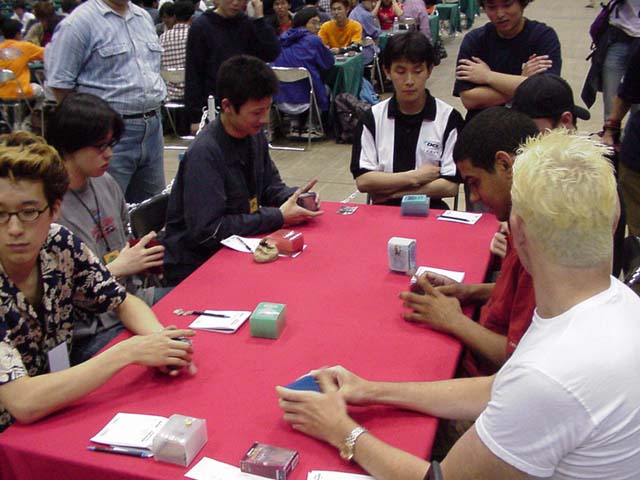 Chris Benafel started out with a Crimson Acolyte, but upon finding out that Yusukewasn't playing red, he traded up for a Sawtooth Loon, which was soon joined by a Razorfoot Griffin. Yusuke's ground army, led by a Charging Troll and a Mirrorwood Treefolk, was big enough to race the flyers, and when he added a kicked Canopy Surge, he would have been right to show a little confidence in the way the game had progressed.

Benafel retreated into Defense Mode, Shackling the Treefolk and leaving his Riptide Crab back, but he was forced to admit that things were "not good" when a Stone Kavu came out. Describing the situation to teammate Ryan Fuller, he lamented the fact that the Surge had come when he had one untapped Island "instead of . . . you know? It would've been game".

Deciding that it was safe to continue with the flyers, Benafel played a Glimmering Angel, which quickly died as it chumpblocked the Stone Kavu. When Benafel conceded, Yusuke had a Charging Troll, Stormscape Apprentice, Galina's Knight, and Stormscape Familiar all poised to attack, versus Benafel's complete lack of creatures.

Between games, Benafel burst out with "I love you, Ryan Fuller!" as Fuller played a timely Wallop to rid his game of a pesky darigaaz the igniter.

In his own game, Benafel started slow, as his lashknife barrier, while nice, was not an actual creature, and so did very little against the opposing 3/3 Stone Kavu and Charging Troll. The Hunting Drake he added, however, dealt with the Kavu nicely. In savage retribution, Yusuke played Tribal Flames on the Drake.

Benafel had a kicked Benalish Lancer to shore up his defenses, but nothing obvious to deal with the Troll or the Stone Kavu which returned to the game after having spent a little time in the "Time-Out" corner on top of Yusuke's library.

In seat B, Williams was feeling confident and singing a song about "Doomsday" as his Doomsday Specter wreaked havoc on Hiroshi Itani's hand. When he Spinally Embraced Hiroshi's Vodalian Serpent, the middle match was over.

An Explosive Growth on Yusuke's Kavu didn't do as much damage to its two blockers as he had hoped, since Benafel had a Pollen Remedy ready. "I didn't take any damage last turn, and he lost a guy. I'm pretty good," mumbled Benafel, who still seemed to feel that it was up to Fuller to win the match for the team.

Benafel's response to Yusuke's next play: "Shivan Wurm. That's great." It wasn't as bad as it could have been; all Yusuke had was a Charging Troll and a Shivan Wurm, while Benafel had Benalish Lancer, Silver Drake, Samite Pilgrim, Glimmering Angel, and a Lashknife Barrier keeping them all alive.

Yusuke could see he needed some flying defense, so he judiciously played a kicked Pincer Spider, but Benafel didn't seem fazed by this. Waggling his fingers in the classic "Bring It On" fashion, he smiled as Yusuke sent his Troll and Wurm into combat. The Drake blocked the Troll, while the Pilgrim, Angel, and Lancer teamed up to try to stop the Wurm. Yusuke put all seven damage on the Pilgrim and then sacrificed the Wurm to Eladamri's Call to get a Fleetfoot Panther. On his way to the graveyard, the Pilgrim saved the Drake from dying, and then took a sharp left turn into Benafel's hand as Benafel turned out to have a Fleetfoot Panther of his own.

"He's not gonna like this," commented Benafel as he drew a Silver Drake, bouncing his Fleetfoot Panther. "I think I'm gonna win this game."

Yusuke bounced his own Fleetfoot Panther when he played his Shivan Wurm, so both players now had a loaded Panther, but Benafel was full of confidence as he put an Armadillo Cloak on one of his Silver Drakes and attacked for a ten-point life swing, and didn't let up until Yusuke died.

With nine minutes to go after the end of Game 2, AlphaBetaUnlimited.com had already won the overall match, but Benafel wanted to play his match out.

Yusuke started strong with a pair of Thornscape Familiars, which let him play a turn-four Shivan Wurm. This play got him a high-five from David Williams, who was willing to momentarily forget that his teammate was on the wrong side.

The card Benafel drew when his Riptide Crab died to the Wurm made his entire team claim that he was going to come back. When Yusuke put Armadillo Cloak on the Wurm, it looked a little less likely. Benafel had a pair of Pro-Red characters (Galina's Knight and Crimson Acolyte), but things looked grim until he finally drew his fifth land to allow a Hunting Drake, which bounced the Wurm. Yusuke was left with just a Familiar and Mirrorwood Treefolk. Which isn't bad, really, since he drew his Shivan Wurm and could play it right away, bouncing the familiar.

Time was called at this point, meaning that there were only the five extra turns for either player to pull out a win.

Benafel was able to block the Shivan Wurm with everything, killing it, and putting himself at two. That's when Susuke showed him the Tribal Flames.