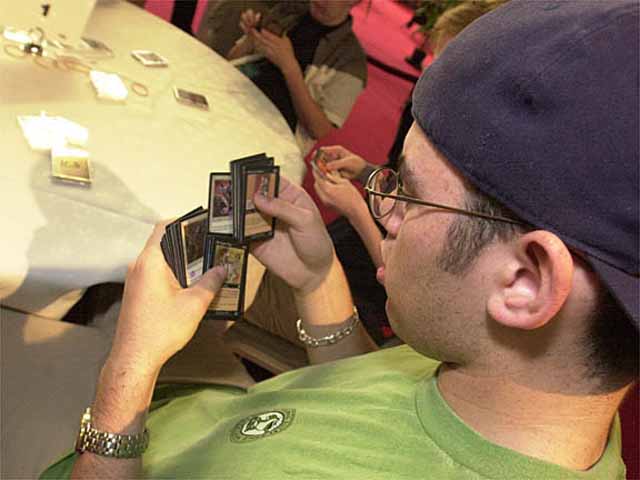 The first round of the draft portion of Worlds pitted Tom van de Logt from the Netherlands against Chris Benafel from the United States. Both players had astonishing 6-0 records after the first day, and drafting on table one, van de Logt had drafted a white and blue deck with several flyers. Benafel, on the other hand, had picked black and white with a Notorious Assassin as one of the top cards.

Chris won the die roll and chose to play. He didn't exactly get off to a great start. Playing swamps during his first two turns, he then failed to lay a third land for the next three turns. Tom got a better start. Although he stalled on three lands for a while, he managed to cast some creatures to put at least some pressure on Benafel. A Silkenfist Fighter started nibbling on Chris' life, while the Rishadan Airship got Vendetta'd. The Waterfront Bouncer survived, though, and it even joined the fight when Benafel started to discard.

Eventually, Chris drew his third land. "I must be cheating. Now I can start the beatdown," he joked, slapping an Alabaster Wall on the table. Tom chose to bounce the wall so that he could continue hitting with his army that grew to include two Mine Bearers and a Ribbon Snake.

Benafel drew more lands, though, and he got out a Lightbringer, a Silkenfist Fighter and a Trenching Steed. However, Tom had the upper hand as he could bounce the key blockers. Summoning two consecutive Spiketail Drakes, he flew over Benafel's defense to take the game.

Chris chose to let Tom start in the second game, and it seemed to pay off when Tom had to mulligan his five-land opening hand. The Dutch player kept his six-card hand, but he didn't exactly get an amazing start. He summoned a turn two Waterfront Bouncer and started attacking, playing nothing but lands for the next three turns.

Benafel played lands for the three first turns, and he then dropped his bomb; Notorious Assassin. Tom had no real choice but to bounce the Assassin. He then got out a Spiketail Drake and started attacking while bouncing the Assassin, eventually emptying his hand by casting a Ribbon Snake as well.

The American finally got rid of the annoying Bouncer with a Vicious Hunger, and the Notorious Assassin came into play once again. Tom got his opponent down to four before all his creatures were in the graveyard, and a few turns later, Benafel finished him off.

Tom went first in the final game as well. He played a third turn Mine Bearer while Chris answered by putting a Lightbringer into play. Then the Waterfront Bouncer returned to the table. Tom traded the Mine Bearer for the Lightbringer and summoned a Spiketail Drake during turn five. Chris got out a Rathi Intimidator and a Nightwind Glider and attacked, but a Trenching Steed was kept off the table by the Bouncer.

A Defender en-Vec gave Tom some good defense, but at this time the Notorious Assassin hit the table and he had to bounce it. The Glider was bounced asdwell so that Tom could get through some damage, and he went in with everything, hitting Benafel down to eight. Chris couldn't do anything but re-play the Assassin and the Trenching Steed in order to defend himself.

During turn nine, Tom started by bouncing the Notorious Assassin. He then had the Drake, a Mine Bearer and the Defender en-Vec available for an attack, while Benafel had a Rathi Intimidator and a Trenching Steed on his side of the table. Thinking for a while, Tom sent all his creature over. Chris chose to block the Mine Bearer with the Intimidator and the Defender with the Steed. After thinking for a little while, he tapped the Intimidator to cast Ramosian Rally for free, and passed priority. This caused Tom to think for a while, then he tapped four mana to pay the mana cost for his own Ramosian Rally. The Intimidator died, Chris took four and went down to four life.

During this attack, time was called, and the two players went into their five extra turns. Again, Chris played the Nightwind Glider and the Notorious Assassin, but Tom bounced the Assassin and attacked, forcing Chris to block the Spiketail Drake with the Glider, bringing him down to two. Chris had to topdeck something to kill the Drake, but he failed to do so and Tom won during his last extra turn.