Round 8 Feature Match: www.alphabetaunlimited.com vs. Two men and a baby 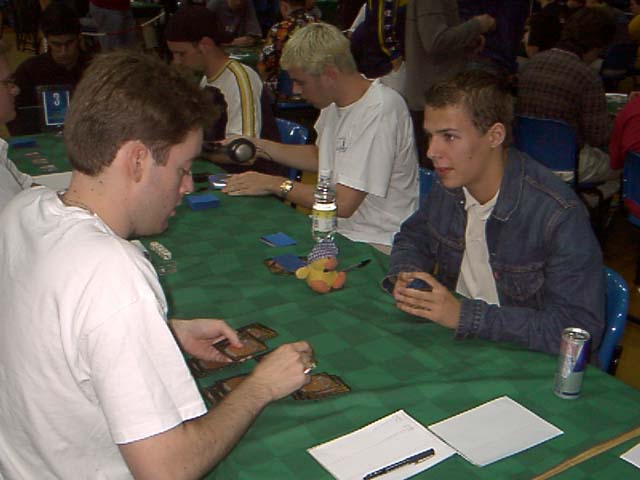 Two men and a baby:

This was a tough match up to follow since the two teams have been pretty picky at each other during the weekend. When www.revised4th5th.com arrived late today there were some comments about the reaction from "Two men and a baby" who would get a match win.

As they sat down for the round the trash-talking flew thick and fast with the only silent ones being Niels Jansen and Brian Davis, although with a big smile. Despite all they seemed to be mostly joking and kept things very civil throughout the round, to the benefit of the crowd.

While the other four players were still shuffling Ryan and Brian were already playing with a Thornscape Apprentice on Ryan's side. Brian tried to play a Verduran Emissary but Fuller played a Tribal Flames to kill.

The Dutch-Canadian then played a Razorfoot Griffin and a Power Armor while Davis played a Voracious Cobra and a Stone Kavu.

Trey: "I think I'm in the bottom half of the sketchy players list."
Ryan: "Check your math."

The Griffin kept swinging while the Apprentice kept the Kavu at bay and Ryan played a Kavu Agressor to increase the pressure. With seven minutes gone in the round Jensen and Benafel finally got their match underway while Cleave found a Plains to get his White cards going.

Meanwhile Brian Davis played a Thunderscape Apprentice but that didn't seem enough to stop Ryan's amazing beats and he was forced to concede a turn later. In the middle table Chris was working at full speed: Vodalian Zombie with a Sleeper's Robe (against a Green based deck) and a Ravenous Rats with a Cavern Harpy. At the other table Noah Boeken had just called a judge to watch Trey for slow playing.

They lost some illustrious spectators when Black Ops got their decks back from a deck check after the first game. Brian opened with Slimy Kavu while Fuller played a Thornscape Familiar followed by turn three Kavu Agressor and a Skittish Kavu!

The Familiar traded with the Slimy but Brian had a much better blocker: Voracious Cobra. He then got ready to go on offensive with a kicked Pouncing Kavu. The Kavu jumped into the Red Zone taking the Cobra with him. Fuller used a Gerrard's Command to pump his Skittish Kavu and killed the Pouncing Kavu.

Fuller dropped a Charging Troll but Brian took quick care of that with a Plague Spores that took down Ryan's single Plains.

Ryan: "Not the Plague Spores!"

Still that was not enough to wind down Ryan Fuller: he peeled a Scorching Lava removing the Cobra out of the way and bringing the American down to ten. Brian Davis took a long time to make up his mind about the next play finally playing a Volcano Imp.

Ryan played a Thunderscape Apprentice which led to the following conversation.

Ryan: "Now is the time to Breath! Trust me that is the right play."
Brian: "If I had it I would certainly do it!"

A Flametongue Kavu came in killing the Skittish Kavu and a Tribal Flames sent the Agressor to the graveyard as well. All that Ryan could muster was a Yavimaya Barbarian that promised to keep the Flametongue quiet.

Davis must have had a trick because he sent the Flametongue in trading with the Barbarian and dropping a second Volcano Imp. Fuller played a Kavu Agressor and admited that he didn't know Brian had any Volcano Imp.

Ryan: "I don't pay attention when I draft. I'm a simple person."

A Tribal Flames killed the poor Apprentice and Brian attacked only with one Volcano Imp keeping the other back to stop the Agressor. Benafel was once again in the fashion business with a Sleeper's Robe on a Tower Drake while Noah Boeken had just mulliganed a six land hand.

Davis: "This is tight!"
Ryan: "You are reading it... it's a Darigaaz's Charm! Here comes the Flametongue!"

Sure enough it was the Darigaaz's Charm and the Flametongue sealed the game by removing a blocker and joining the full out attack on the next turn.

Still with twenty minutes in the round they stopped shuffling and trash-talking Trey Van Cleave and actually started playing. Ryan started with a Power Armor and a Yavimaya Barbarian while Brian played a Kavu Agressor and killed the Barbarian with a Flametongue Kavu before Ryan could untap to use the Armor to save it.

The next creature was a lot tougher to deal it: Charging Troll. Davis thought for a long time while Noah Boeken guaranteed he would win his match. Brian finally made up his mind and used a Tribal Flames on the Troll. Ryan regenerated, tapping out, but that couldn't solve a Darigaaz's Charm. 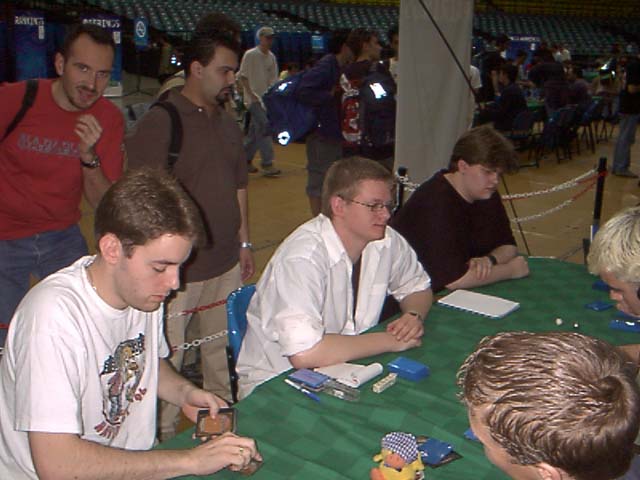 Two men and a baby

Ryan: "Was it that hard?! What took you so long?!"
Brian (pointing at the Darigaaz's Charm): "There was a lot of tricks out here!"

Brian played a Stone Kavu. Ryan got rid of the Flametongue with a Tribal Flames and played a Nomadic Elf. The Stone Kavu was blocked by a Power Armored Nomadic Elf.

Trey: "Noah is just a topdecking fiend."
Ryan: "Are you sure he isn't just outplaying you?"

Ryan: "Let me win, I never lose! Losing is embarrasing..."

Fuller played a Yavimaya Barbarian and could finally attack with the Champion. He was at one so the game was very, very tight. Ryan played a Quirion Dryad but still had to stop a Slimy Kavu and a Kavu Agressor.

He then played a Thunderscape Apprentice while Brian Davis seem to draw nothing but lands. At the other tables Chris had just won his third game and Cleave had pulled the second one to carry his match into the third game. In this table Ryan was involved in NASA level math to figure out how many creatures he could use to attack.

He finally settled for the Dryad and the Barbarian. Davis tried to Singed the Apprentice but Ryan saved with the Power Armor. That didn't matter at all when Brian Davis peeled a Tribal Flames to put the game, and the round, to an end since Noah Boeken had just won the third game against Trey Van Cleave, as promised.