Round 8: Frog Eaters vs. The Ancient Kavus 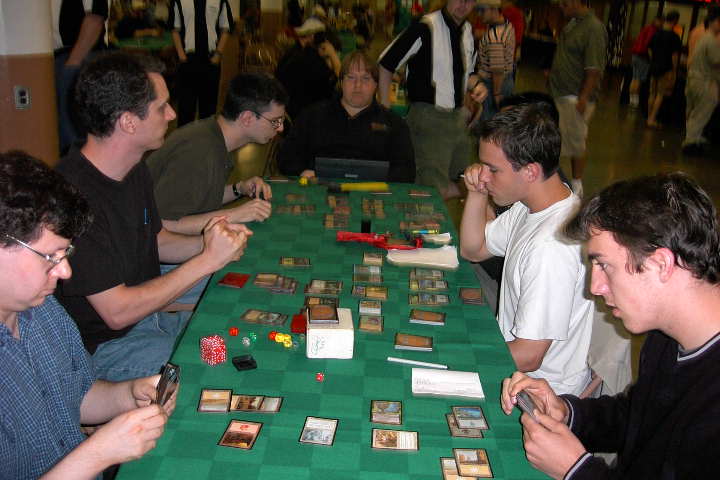 Frog Eaters vs. The Ancient Kavus

A little over a year ago, no one had any idea who Antoine and Olivier Ruel were. Then, as members of French national team champs "Black Ops", then stunned the field at the very first Masters series by upsetting Antarctica and winning the event. Black Ops also won Grand Prix Cannes and each Ruel brother claimed an individual Limited Grand Prix as well. Suddenly Raphael Levy (with his two PT Top 8's and GP Lyon championship) seems like he might be the weak member of this team. He's accompanied his French friends over to the States a week early for Worlds and has Florent Jeudon's usual seat on the team Rochester powerhouse. They're calling themselves Frog Eaters and they were in 4th place after day 1.

Their opponents in the first round of day 2 were The Ancient Kavus. Matt Vienneau is looking for his third Invasion-block Limited GP win and he's teamed up with gary Krakower and Mike Pustilnik to go for it. They sat in 3rd place when they went to bed Saturday night

Both teams put Fertile Ground decks in the middle seat, blue-white decks on the left and black-red decks on the right during the draft. Pustilnik's blue-white added in red for Razorfin Hunter and Goblin Legionnaire, among others, while Olivier Ruel added black removal to his own blue and white cards. Levy threw in green with his black and red, allowing him to run some amazing cards for the mirror matchup like Pygmy Kavu, Llanowar Cavalry, and Consume Strength. Krakower also had a little green, but not nearly as much

Pustilnik cheered and Olivier Ruel winced as Enlistment officer sent Olivier's Dromar to the bottom of his deck. Pustilnik's card simply seemed better than Olivier's for the rest of the game and Pustilnik had the quick 1-0 lead.

Levy made Krakower pay for Magma Burst with the kicker by playing a Plague Spores that knocked Krakower down to 2 lands for quite a while. Meanwhile Levy undid the Magma Burst with an Urborg Uprising and the rest of the game was just ugly. Vienneau won a complicated damage race against Antoine Ruel to give the Kavus a 2-1 edge in game 1's. 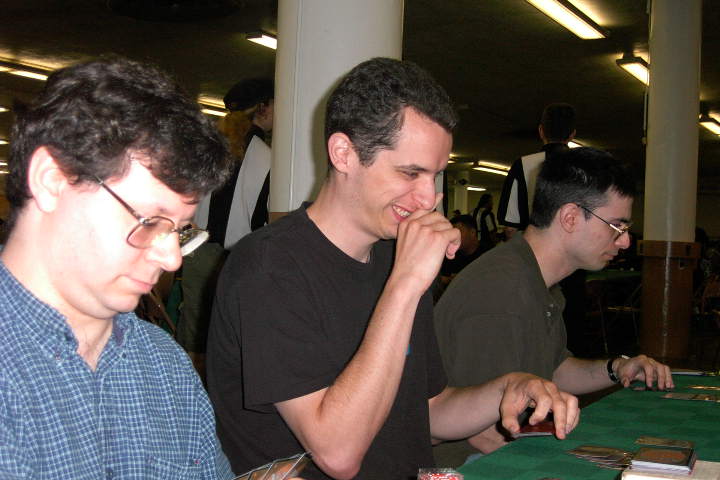 Levy set Krakower up nicely for a Consume Strength in game 2. That plus a timely Zap dealt with most of Krakower's board, including a particularly annoying Zombie Boa. Levy's creatures looked pretty weak - Pygmy Kavu, Llanowar Cavalry, and Firescreamer - but when you remove all your opponent's stuff, it just doesn't matter what you're attacking with. Levy seemed confident until Krakower played an Urborg Uprising. Suddenly all Levy's removal spells had been undone and it was a game again. Krakower got busy with his Zombie Boa and when he also drew his Magma Burst, Levy was in big trouble. He drew 4 cards off his second Pygmy Kavu, but they included lands 13, 14, and 15 for the game plus just one spell so he was still in trouble and soon their match was tied at 1.

The match between Olivier Ruel and Pustilnik continued to be all about Dromar. In game 2, Dromar came into play instead of heading for the bottom of the deck and the Frenchman evened the game score at 1. Game 3, though, was about a different monster. Olivier played turn 4 Marsh Crocodile and Pustilnik discarded Dodecapod! Olivier took one 5/5 smash to his face, but recovered nicely with Barrin's Spite. Ruel built up a good hand by playing his Phyrexian Rager twice thanks to Artic Merfolk. He had to ignore his Recoil until Pustilnik committed Dodecapod to the board as a mere 3/3. He also had to work around Pustilnik's Obsidian Acolyte.

Vienneau and Antoine Ruel also went to game 3 and Antoine kept a hand with 6 lands and an Obsidian Acolyte. One of the better strategy articles to ever hit the Internet was Eric Taylor's analysis several yeas ago of the mathematics behind 6-land hands. His conclusion was that you've got to cash them in for 6 random cards. Vienneau loves to tell the stories about precisely that article and how it changed his own play. It did the same for me, back when I was playing. Antoine Ruel, however, either doesn't agree or never read the article because he kept that hand. He drew 2 land and 3 spells over his next few turns, but one of the spells was Fertile Ground and he wound up, not surprisingly, very mana-flooded. Even though he defied the odds and drew 4 straight spells after that, he was still too far behind. Match #1 to The Ancient Kavus. 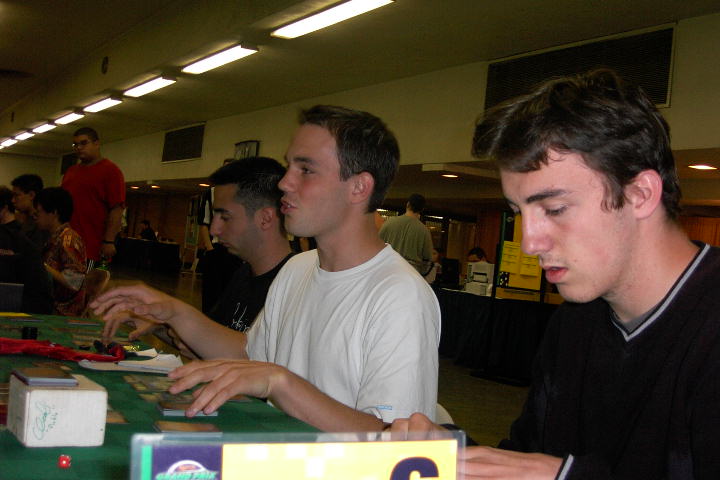 Raphael Levy continued to fit right in on Black Ops by showing off incredible janky cards that just happen to be amazing in his matchup. That's been a Black Op hallmark for years. He drew 3 cards off a turn 3 Pygmy Kavu and then drew 3 more off another on turn 6 and things looked bleak for Krakower.

Meanwhile Olivier was working his ass off. He got Pustilnik to tap out so he could Recoil his own Hunting Drake while Pustilnik had Obsidian Acolyte in play. That allowed Olivier to bounce Pustilnik's Razorfin Hunter and take the lead in the damage race. However, Pustilnik surprised him with Orim's Thunder on his own Dodecapod after Olivier had double blocked to kill it and that turned the race again. Olivier top-decked Dromar, but Obsidian Acolyte let Pustilnik attack through it for the win. Game and match to The Ancient Kavus.

Levy did indeed turn his massive card advantage into a win, but the very close, very hard fought match went to the Canadians (well, the Canadians plus Pustilnik), not the Frenchmen.