Round 8: Huey, Brock, and Linde vs. Dynasty 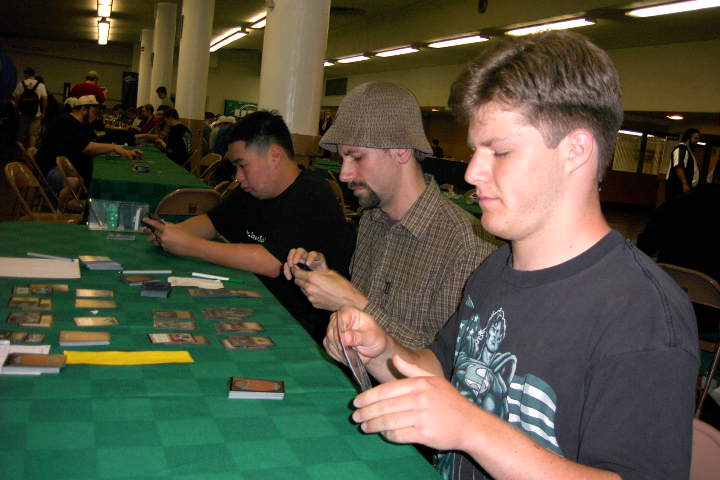 Last season, Huey, Ben, and Casey (Billy "Baby Huey Jensen, Ben Rubin, and Casey McCarrel) won GP Pittsburgh. Since then, Huey got upset about Casey showing up late for Day 2 of PT NY last year and was unwilling to play with Casey. This caused Huey to look for teammates on the east coast. In the end he found long time friends Brock Parker and Matt Linde from Maryland to team with. After Casey's suspension, this left Ben with no teammate. Ben found longtime draft partners and sometime opponents Gab Tsang and Brian Hacker. Dynasty was formed. This match-up pitted former teammates and long time friends against each other.

Both teams went into the draft with the same strategy. They both wanted to put B-R in seat A, 5 color Green is seat B, and W-U is seat C. Dynasty kicked off and both teams seemed to be following the plan until Linde (Seat C) opened Crosis, The Purger in the 5th pack. Since Crosis is such a beast Linde started drafting U-B-R cards. The rest of the draft followed that pattern with Tsang (Seat A) adding green to his B-R deck, Rubin(Seat C) adding red to his U-W deck and Parker (Seat A) adding blue from very early on. This meant that Huey, Brock, and Linde had two Crosis decks and only Huey drafting white cards.

Brock and Linde seemed very upset during most of the draft with the cards Huey was telling them to draft. When they went to make their decks Huey had about 30 playable cards to choose from and Brock and Linde could barely fill up their decks with 23 playable cards. Huey had a good base of green creatures and some great spells in white, black and blue but didn't have a lot of good mana fixers. Linde's deck included two bad cantrips, Last Caress and Travelers Cloak, both of which he wasn't happy about. Brock's U-B-R deck contained about 5-6 great cards but his overall creature base was a little short and he was running sealed deck mana (7-5-5).

Dynasty was a little happier with their decks even though Hacker seemed to not know the cards that well. They ended up with good decks overall. Hacker had a good 5-color deck with plenty of cards to chose from. Rubin had a good U-W-R deck with decent creatures and solid spells including 2 Rushing Rivers but he did have sealed deck mana. Tsang had a great B-R-g deck with Tahngarth and Illuminate.

Dynasty won the first game all three matches against Huey, Brock, and Linde. Both Huey and Linde had pretty poor draws and were run over pretty quickly. Tsang then won his second game in about 2 minutes thanks to Tahngarth. Linde then smashed Rubin solely on the power of Crosis. Rubin did his best to bounce the dragon and race but a "persecute" on blue and Agonizing Demise on Rubin's Lightning Angel sealed the game for Linde. Hacker and Huey's second game was very close and came down to a top decked Flagbearer by Hacker that kept him from losing to the Repulse in Huey's hand.
About a turn later in the Linde/Rubin match Linde conceded to a Rushing River.