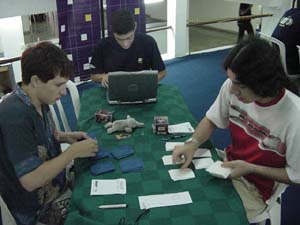 Picking the Feature Matches this round was really easy: just get the four players who went 7-0 on the first day. The two Brazilians face of against Chilean Rafael Le Saux and Antoine Ruel. On this table, one of the Possato brother squares off against Rafael in one of his usual flashy shirts. They already know each other's decks: Possato is playing Three-Deuce and Le Saux has Walamies' Dumbo.

All the need today is a 3-3 to make the Top 8. They have surely given some thought to the other three decks since they might get to face them all today.

With a huge crowd around the tables even before they started shuffling they talked about their previous Feature Matches including a ridiculous round Possato had during the Brazilian Nationals. The Brazilian dropped a Lyrist and a Guildmage on his second turn while Rafael launched in to a flurry on card drawing spell.

He dropped his huge toy elephant to represent a Call Of The Herd token but Possato promptly Sworded it back to the sidelines. With the token out of his way he tried to get an Elephant of his own. Rafael tried to find a answer in a Fact Or Fiction that revealed the following piles:

He took the Swords and let the Call resolve. With his opponent tapped out William used his last land to play a Cursed Scroll giving Le Saux a new headache, and one he couldn't solve with his many creature removing spells. The Chilean played a Wrath to wipe away the three creatures but another Elephant sprang back (from flashback) along with a second Scroll.

Still at nineteen life and with a Sword, two Wastelands, two Impulses and two Brainstorms Le Saux still had a lot of time, and tools, to find answers Williams's threats.

Rafael: "On my upkeep, foil Impulse!"
William (laughing): "Isn't that a marked card?"

The Sword took care of the second token and Possato emptied his hand by dropping a Lyrist. Again Rafael drilled deeper into his deck finding a Seal Of Cleansing and another Call. He Wastelanded away the Treetop and got his toy Elephant back in the table. His constant card-drawing spells kept him cycling through the deck at an amazing speed and his business spells started to appear: he now had two Seals and a Counterspell in his hand.

Since Possato was down to one card in hand he tapped out to cast, and blow, the two Seals. Now at thirteen and with an Elephant facing a Lyrist he seemed in control but Possato used that window of opportunity to find, and cast, a River Boa. Rafael shrugged and flashbacked himself another elephant (this time, sadly a simple Player Rewards token). 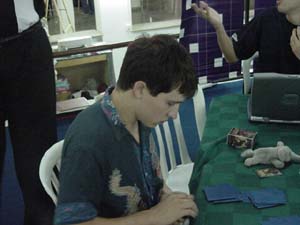 Possato's two creatures got rid of one Elephant with the Boa promising to hold back the other one eternally. While this was a good plan at the time it didn't help the Brazilian's chances. He had the aggressive deck so he need to get some damage.

With flair Rafael drew a Swords and got rid of the Boa and dropped another Elephant. The writing was on the wall but William clung on the a desperate hope. An Elite tried to kill a token with the help of a Wax/Wane but Rafael had a Counterspell.

During the whole first game they had this mantra going where Rafael would ask William how many cards he had in his hand and William would answer and then ask Rafael the same question.

William sided in his Miners, Scalds and Pyroblasts while Rafael added Morphlings, the last Swords and the last Wrath. The Chilean had his game plan prepared since he sideboarded in a flash while Possato debated a bit more about what to do. Again they talked about Feature Matches and the first game with that topdecked Swords.

William: "You are always very lucky in Brasil. That has to end."
Rafael: "True. It's the shirts. My first day shirt always gets me a 7-0 in Brasil. This is my second day shirt."

The shirt didn't seem to be helping when Rafael frowned deeply while looking at his hand: Two Wastelands, two extra lands, Swords, Seal and another card. He agonized over it for a long time.

William: "That is it! Luck is running out!"

Indeed it was a weird hand and he came out in a strange way for a control deck Wastelanding away the first two lands from the Brazilian. That put Possato in clear trouble has he had to discard a Call before finding a second land: Treetop Village. Meanwhile Le Saux dropped a couple of lands and used a Tithe to reach four mana.

William was in for a very uphill battle and he decided to used his own Wasteland to give Le Saux a taste of his own medicine. The Chilean had however reach four mana and that was all he needed: he answered with a Fact Or Fiction.

He took the second pile since he needed the lands. With his opponent now tapped Possato played a Boa. But the early Wastelands had set the tone. Le Saux Sworded the Boa and discarded a Seal. The next creature, Elite, got Sworded as well. The Brazilian was in growing trouble as Le Saux's Dumbo kicked into high gear. Things reached rock bottom when Rafael tapped out to drop a Morphling with complementary soundtrack. 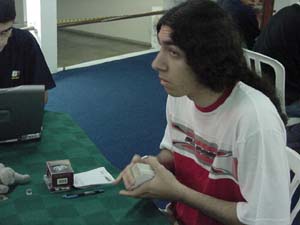 The only answer William could come up with was a Boa that would have a very hard time racing the Blue Wonder. If he could draw another land he could attack with the Treetop as well but above all he was shaking his head about mana color. His hand was chockfull of Red cards since the start of the game but he had lost his only Red source, Plateau, in the first turn of the game.

He put up as much of a fight as he could but again his slow start (this time imposed by the Wastelands) had cost him the game, and the round. On and on the Morphling sailed in setting up Possato's doom. Rafael Le Saux kept his amazing winning streak in the tournament: he hasn't dropped a single game yet!