After going 8-0 on Day 1, ABU led the pack as the only undefeated team, but Absolute was hot on their heels at 7-1. 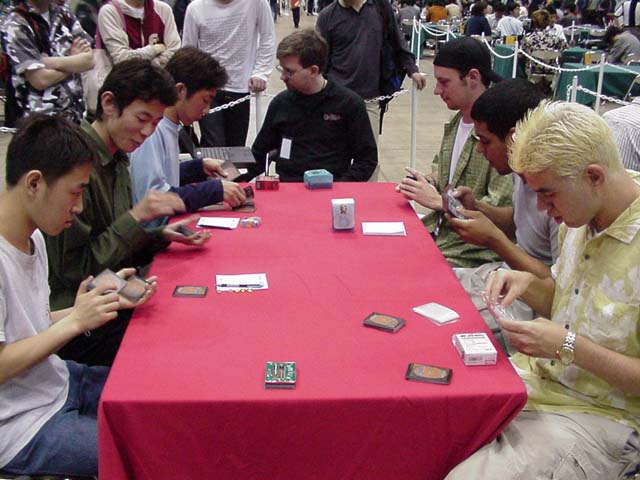 By the time any of the other games on the table had seen a land played, Fuller had already seen his Kavu Aggressor die, leaving him a Nomadic Elf, while Hiroto had an Island, a Plains, a Forest, and a Mountain out, a very impressive spread of mana. Fuller's Frenzied Tilling barely put a dent in the mana development, but it gave Fuller enough mana to bust out a Verdeloth the Ancient, with kicker 4 (putting out four 1/1 Saproling tokens that Verdeloth made into 2/2s).

The carnage was impressive, especially since Verdeloth should have gone to Hiroto if not for an irregular draft which led to him receiving a random card and Verdeloth going all the way around the table to Fuller.

Hiroto put out a Mirrorwood Treefolk, hoping to take advantage of Verdeloth's +1/+1 for Treefolk, but scooped when it was clear that nothing he had was as big as the Treefolk Legend.

The second game started inauspiciously for Hiroto as a mulligan slowed down his development, but he still got a Forest, Plains, and Island out to go along with a Dream Thrush by turn 3. A turn 5 Mountain showed that he had no need for all seven cards to start the game. And his mana wasn't just sitting idle; he had an Alpha Kavu and a Kavu Climber to hold off Fuller's two Thornscape Familiars, Root Greevil, and Quirion Sentinel. Adding a Serpentine Kavu, it was clear that Hiroto had all the power in the game.

An Armadillo Cloak on Fuller's Root Greevil meant that he could probably slow down the effects of Hiroto's big-creature onslaught, but when a Halam Djinn unexpectedly showed up on the Japanese side, Fuller had to block with the Sentinel and both Familiars just to get rid of it, leaving him with one Greevil.

Then Hiroto got his revenge for having been killed by Verdeloth: he played molimo maro sorcerer, which was a mere 7/7 Trampler. Ryan shrugged and spent 13 mana on Verdeloth, which (thanks to the Familiar) translated into eight Saproling tokens. Verdeloth and Molimo eyed each other across the battlefield, while Hiroto's Dream Thrush did one point of damage per turn.

At this point, Chris Benafel received a match loss for misregistering his deck with only 39 cards.

Hiroto Hobbled the Cloaked Greevil, but stayed safe in the air, whittling Fuller down while locking up the ground game. Fuller tried a massive suicidal attack, but it ended with him scooping and shuffling up for Game 3.

"Check check check this out said Fuller as he sacrificed a Tinder Farm to Frenzied Tilling one of Hiroto's only two lands, the one with a Fertile Ground on it. The next turn, Fuller launched a kicked Pouncing Kavu. Then he added a Quirion Sentinel and a Mire Kavu the next turn.

It was a good start, and Hiroto just couldn't deal with it. "You're welcome," said Fuller to Benafel, as the team won despite the match loss.