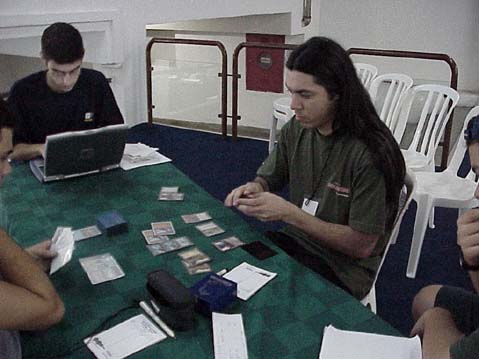 We just had a Possato brother and now he get the second one. He is playing a very strange deck for Extended: Rebels. At first it might seem a wacky idea but with a 7-1 record so far we figured we better have a look and see what he is up to.

Sergio had to take a mulligan and his second hand was good enough to start the game. Dawton opened with a Defiant Falcon and Sworded a Call Of The Herd token. Martins wisely Sworded the Falcon away as well before it could start recruiting.

To keep his creature safe Possato played a Meddling Mage naming Wrath Of God and then Brainstormed to find another searcher (the second Falcon). He tried for a second Mage baiting out a counter since Martins felt he couldn't deal with two Mages. This gave Dawton a window to play the Falcon.

Sergio was now in trouble. Facing a Wrath-locking Mage and with the Falcon finding a Lin-Sivvi he seemed on the sure path to losing the first game in big style. Needing help he used a Fact Or Fiction to find a solution.

After consulting his hand Sergio decided he would rather take the four cards and Tithe although he had no immediate answer to the recruiting menace. On the following turns he did what Dumbo does best: draw cards. Two Impulses refreshed his hand but he still needed to get rid of the Mage before he could play the Wrath (he had two Counterspells to protect it).

Lin-Sivvi called up her pal Sky Marshall and Martins time was running out. While he Brainstormed for an answer Dawton kept looking at the two castable Force Of Will in his hand. An Elephant token was not enough to stop Possato's army: the flying duo had him against the ropes in no time.

Sergio side in Two Kegs, Misdirection and Intuition while Dawton added his Phyrexian Furnaces and Hibernations. They shuffled in silence with twenty-nine minutes still on the clock and again Sergio had to take a mulligan. His life didn't get any simpler as Dawton played a turn one Sergeant. 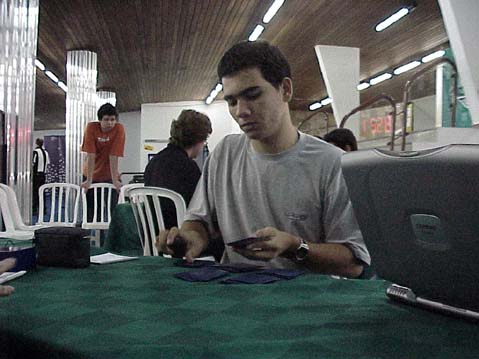 To buy himself some time Martins Wastelanded Dawton's Adarkar but Possato had a Lieutenant. If he could muster enough land he was in good shape to win the game. A second Wasteland seemed to get him into trouble but he dropped the proverbial topdecked elbow: Gaea's Cradle. The Rebel nonsense was about to begin!

Sergio could only drop a Dumbo to somehow race Possato but the table looked grim for him. Possato ignored for the time being and set about gathering himself a merry army before Martins could track down a Wrath Of God. Sergio dug deep with a Fact Or Fiction:

Possato split the two first cards (Keg and Swords) in a flash and Martins took the second pile. The Swords took out Lin-Sivvi just as the Sky Marshall came up but Dawton was now in full control of the game. Despite only having one Island and the Cradle he had Two Force Of Wills and a Counterspell in his hand (thus could cast Force once) while Sergio Martins was desperately trying to stem the increasing bleeding.

Sergio's last gasp Fact Or Fiction finally revealed a Wrath along with a Force Of Will and a Counterspell. He got the Wrath along with the Counterspell (in a strange split). By now Dawton had a Tundra and could now counter twice so when Martins tried his last gambit the battle was short and bloody.