Round 9: Dynasty vs. The Ken Ho All-Stars 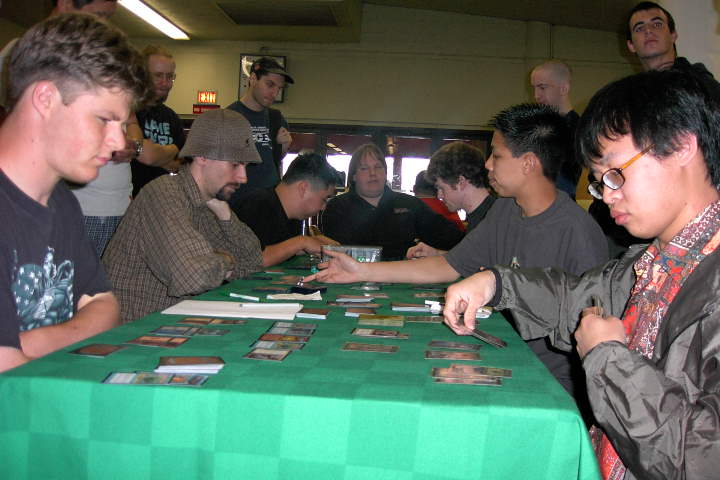 Dynasty vs. The Ken Ho All-Stars

Brian Hacker and Gab Tsang picked their specialty format to attempt to make their return to the Pro Tour: team draft. These two elders of the team draft tribe have teamed up with kindred spirit Ben Rubin as team Dynasty and they need an invitation here or 10 PT points at Worlds to get their invite. With just two rounds left in the Swiss they found themselves in second place, rounded up in the pairings to take on the lone undefeated team - the Ken Ho All Stars. Ken Ho is second in the Rookie of the Year race and it yet another in a long series of San Francisco area players that includes both Rubin and teammate Dan Clegg, along with Casey McCarrel and Trevor Blackwell. The other Ho on the team is the ever-popular Lan Ho.

Clegg and Rubin are opponents this round, but they go way back. As 14 year old friends they qualified for the junior Pro Tour together and Clegg's Top 8 finish at the first Grand Prix San Francisco (back in 1997) inspired Ben to try to qualify for the real Tour. The rest is history.

The All Stars had the option to choose which team's middle player would open the first pack. They chose to "receive," forcing Hacker to open first. This seemed a somewhat curious choice as most teams prefer kicking off. A lot of the decision depends which position you think gives you the better opportunity to react to your opponent's color commitments while making it too late in the draft for them to change colors and foil your plans. Going first means you only really take 3 important cards before the other team has pretty much settled in to their colors. In addition, having your seat C player open his pack 2nd rather than 5th makes it a lot easier to change colors if you need to accommodate a bomb. For example, Matt Linde opened a Crosis in pack 5 of the previous round's draft versus Dynasty and their team pretty much screwed up their entire draft in an attempt to accommodate it.

In this draft, though, Dynasty was fairly locked in after just one pack. They opened a Rout and so whoever took it was definitely going to be playing blue-white control. They elected to put their control in seat C - Rubin's seat - and Hacker drafted a Pincer Spider, heading toward the obvious green-in-the-middle plan that everyone uses when seat C is control. The All Stars thus had their chance to react, which they did by having Ken Ho draft a black removal spell in the middle (Exotic Curse) and head for black-blue-white control. Lan Ho went for green against Rubin and his Rout. This might sound odd at first, because blue-white is normally good against green, but the thing blue-white is actually good at beating is aggressive green decks full of "bears." It's not nearly as good against 5-color decks full of powerful, expensive spells ("bombs"). Meanwhile Gab Tsang and Dan Clegg each drafted red-black. Their seat has the most opportunities to get Planeshift red, especially Terminate, so this move made sense. 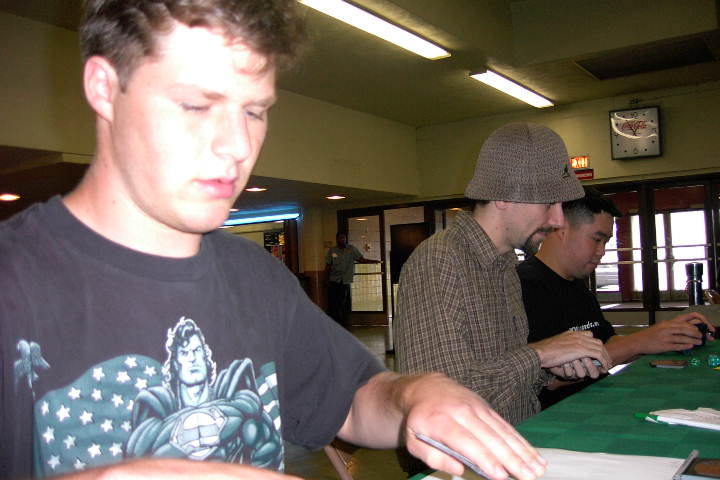 The rest of the draft saw all these theories play out. Neither Clegg of Tsang got a Terminate, while each went into blue for Jilt. Each has one Cinder Shade and one Urborg Uprising (a crucial spell in this removal heavy mirror match) and neither seemed interested in the Pygmy Kavus that Raphael Levy loves so dearly in this matchup. Clegg did wind up running a pair of Jaded Responses, though, so no one can accuse him of ignoring the weak cards that turn out to be good when you know what your opponent is running. Tsang might have a slight edge since he has the one Magma Burst that was opened, but Clegg's creature quality is higher so the overall matchup seems pretty close.

The really interesting contrast came in the two green versus blue matchups. Hacker drafted an aggressive deck with green, red, and white weenies plus a heaping helping of giant growths. He and his Team Dickhead teammates taught the world how to attack back when Tempest-block replaced Ice Age, so it's no surprise that he still likes to turn little creatures sideways. However, Ken Ho has the perfect foil for his plan - blue-black control with Vodalian Zombie, some bounce, some black removal, and powerful discard spells like Probe. It looks like he has enough cheap creatures to survive the early game, enough instants to survive the giant growths, and he's going to wreck house in the late game with his card advantage,

Lan Ho, on the other hand, drafted a much less aggressive green deck. He spent his draft picks on mana fixers and power cards. That should be a much more effective strategy against Rubin's blue-white control. Rubin does have a great blue-white deck, including Rout and Raka Sanctuary, so he's got game too. Overall I think two of the matchups are close, but Hacker should get destroyed by Ken Ho so the All Stars would seem to have the advantage going into the match.

After building and sleeving up their decks, the two teams sat down to play

Tsang used Jilt to kill a Cinder Shade and take the early lead in game 1, but Clegg drew his Urborg Uprising to get back the Shade and a Mire Kavu. Tsang took his offense to the air, and his Cavern Harpy looked like it might be hard for Clegg to deal with. Clegg had the answer in the form of Volcano Imp. Tsang answered back by sacrificing two lands to play Bog Down with kicker, depriving Clegg of Lava Zombie, Mire Kavu, and a second Volcano Imp. Of course, Clegg had held onto Recover so the card advantage war continued. 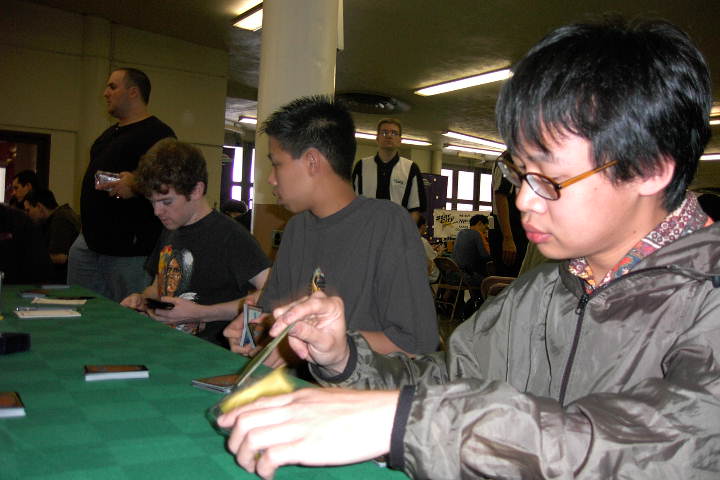 Ken Ho didn't draw any swamps in game 2, but he did have Reef Shaman and that was good enough to create Swamps when he needed them to stall the game. Eventually, he put Soul Link of his Faerie Squadron and won going away, evening that match at 1-1 before either other match had finished game1.

Ben Rubin made full use of Raka Sanctuary in game 1 against Lan Ho. He had both blue and white creatures in play so he could kill any of Lan's small creatures. Lan tied winning with his fatties, but that proved impossible, especially with Shoreline Raider (a card Ben had first picked once he knew he was playing against green) playing defense on the other side. Tsang also eventually took game 1 on behalf of Dynasty, doing enough damage and killing Clegg's 3 toughness creatures to force Clegg to start chump blocking a regenerating Grave Disciple. Chump locking, as usual, was a slippery slope toward losing, but Clegg had made an earlier misplay that forced him into that position (he got confused about how to most effectively use Jilt with a first striking Volcano Imp).

Rubin had his Raka Sanctuary again in game 2, but Lan used Thornscape Battlemage to kill both Sparring Golem and Coastal Drake, leaving Rubin with no creatures. Rubin played out creatures as quickly as he could in an effort o fire up the Sanctuary and stop Lan's attacks. Lan tried to slow him down even more with Repulse, but Rubin answered back with Rushing River, slowing Lan down with the bounce spell long enough to get his main Sanctuary plan going. It didn't work - Lan got in the last few points anyway and evened that match at 1 each.

I was about this point that Ken Ho finished off Hacker, winning the match he was expected to win despite his game 1 color-screw. With Dynasty up and evening the other two matches, though, things were still quite close. The match was further complicated by a mere 12 minutes left on the clock.

Rubin had an excellent draw in game 3 against Lan. He played out Sunscape Familiar and Samite Pilgrim and then countered Savage Gorilla with Evasive Action. While the Pilgrim and Familiar held off Kavu Chameleon, Rubin delivered the beats with Shoreline Raider and Aurora Griffin. Lan managed to come up with all five colors of mana by sacrificing a sac-land, but Rubin had a Hobble for that and Lan couldn't recast it. Rubin's Aurora Griffin went the distance and it all came down to Tsang and Clegg. Their black-red touch-of-blue mirror match was still in game 2.

Tsang got the pleasure of Zapping away Clegg's Cinder Shade on turn 6, but he then had to discard because he still hadn't found a 4th land. He weathered the storm, though, used Bog Down to remove Clegg's last two cards and stabilized the board with 4 points of life left. He seemed to be in control of the game and on the verge of winning the game when Clegg top-decked Soul Burn. Game to Clegg, which evened their match at 1. Both teams looked at the clock, saw only 3 minutes remaining, and realized they had no chance to finish game 3 so they didn't even bother starting.