The Royal Bloodline (Emphasis on the blood)

is Vampire week, and it just does not seem like we can talk about vampires without first turning our attention to the original Magic bloodsucker- Sengir Vampire. That last sentence was a test, and only the most Vorthosian among you passed, and by “passed” I mean “got all bent out of shape because Sengir Vampire is, in fact, not Magic's original vampire, Vorthosically speaking, of course.

The operative word here is “original.” Sure, Sengir Vampire is Magic's first vamp, but the very nature of these vampires will reveal a vast and bloody ancestry leading all the way back to the actual “original” vampire.

Sengir Vampires, like most vampires of modern mythology, is an animated corpse that feeds on the blood of the living. They can fly and gain strength by drinking the blood of their victims. The rest of their characteristics are a bit more up in the air, pardon the pun. 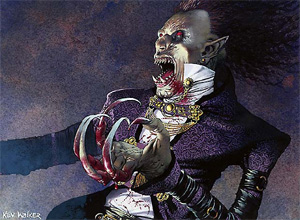 The abilities and physical characteristics of a Sengir vampire are difficult to define because, with each new generation, the breed diverges from the appearance and traits of its originator. Ironically, the first look at a Sengir Vampire way back in Alpha was the furthest, most aberrant the bloodline has ever been. It is a hairless, translucent-skinned horror with little mystical power and absolutely none of that old George Hamilton charisma. These distant relatives of the originator drink the blood of their victims, but their bite does not confer vampirism.

The further back we go, and the closer to the originator we get, Sengir Vampires begin to look almost humanoid. Their skin is still a bit creepy and pale, and then there's the whole fangs and drinking blood thing, but they do actually wear clothes and carry a bit of vampiric mystique. With no flappy skin wings to speak of, their flight is made possible through magical powers- though they do not turn into bats or puffs of smoke. Still, they are yet a mere figment of their powerful undead progenitor.

The Top of the Line

So who is this “originator” that I speak of? It is the namesake of Magic's first vampire, and of six other Magic cards; Baron Sengir. He is the sire of Magic's most numerous line of vampires, the creator of countless nightmares, the pinnacle of a vast and ever-growing pyramid scheme of death.

When we trace the bloodline, (or even just the blood,) all the way back from the wretched, savage, thinskinned nosferatu, we get to the Baron. His power and charisma were so great that even planeswalkers took notice, and the black-hearted among them brought the dread Baron with them on journeys to planes outside of Dominaria. In these travels, the Baron's power and influence were spread as his “children” multiplied in all corners of the multiverse. But, the Sengir spawn-a-thon did come to an end.

On the plane of Ulgrotha (the plane in which Homelands was set), Sengir's planeswalking pal was challenged and defeated by another planeswalker who was not thrilled with Sengir's effects on other worlds. And so it was there, in Ulgrotha, that the Baron settled in and worked toward domination.

The Baron found refuge from the elements in the swamps, dominated the local An-Zerrin peoples, and took over a nearly-completed castle that some nearby Dwarves were building. The Dwarves lay three great attacks against him, desperate to reclaim their home. After a week of this, weary of the horns and the smoke, the Baron flew down to their sea-camp and stole away the dwarven king's daughter Irini, and turned her into a vampire. Though hostilities did continue between the dwarves and the minions of Sengir, the message was received. Fear of being “taken” dulled the edge of the dwarves' fervor and the siege ended. 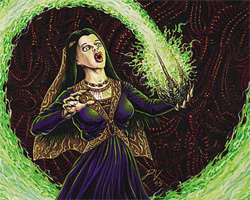 The dwarven girl was driven mad by the Baron and the curse of undeath. The dark and devilish Baron kept her around as a source of entertainment and a sign of his conquest. Irini's dwarven nature, combined with vampiric undeath, created a sometimes comical madness that had her speaking only in dwarven riddling verse. Though her mind was only that of a little girl, she was not harmless. Her childish desires, mixed with vampiric evil, yielded dark fancies. She wished to keep the Anaba, Ulgrotha's minotaur race, in the baron's stables as a sort of demented petting zoo, and she wanted to take a scissors to the Barony's villagers to make them into party clothes for dress-up with the Baron. Of course, Sengir gave her none of this, though he did indulge her enough to hear her comical requests. 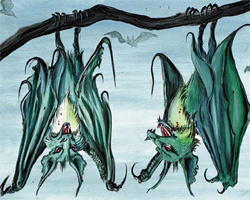 For years, Sengir set up his “Dark Barony,” using all the wit and guile of a demon dog. The immediate terrain around Castle Sengir consists of a variety of small villages built on barges or raised from the swamp on stilts. At the center of each of these towns was a mucky graveyard. When any of the villagers dies, they are buried whole in the graveyard, and turned into undead for use in the Baron's castle.

With the bodies of his own villagers, and occasional stock from fallen foes, Sengir built a “family” of bloodsuckers and beasts and monsters that would plague the civilized people of Ulgrotha. Sengir and his line were the focal point of hatred from all directions. But this is where the Baron differs from some of his savage offspring.

Instead of continuing his raids of bordering towns and the constant growth of his forces, Sengir also used his wits and magical powers to spread his dominion. His sorcerous abilities were already well-developed when he arrived on Ulgrotha, but they grew considerably when he met the crazy old hag. 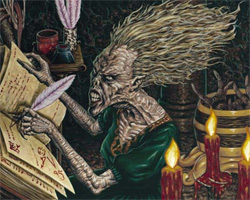 Before her welcome into the Sengir family, Grandmother was known as Ravi, a wizard with a past somewhat similar to Sengir's. She was a powerful pupil of a planeswalker, traveling the multiverse, studying magic, and learning to wield it. Her mentor was also destroyed by rival planeswalkers, leaving her on Ulgrotha alone, desolate, and without direction. She decided to end her suffering by using a mighty artifact she received from her mentor. It was to be used only in the most dire of circumstances. This item was the Apocalypse Chime. As it was wiping out the entire plane, Ravi lay in a protective coffin, growing more insane by the second as she felt her entire world crumbling about her. For centuries she lay in her box, becoming more and more blackened and twisted. Who would have thought that her “Prince Charming” would be on the hunt for blackened and twisted? Sengir found her, released her, and brought her to Castle Sengir. There, his new “Grandmother” taught him more about sorcery and the use of his dark and devious mind.

One thing that makes the Baron so much more dangerous than his bite-mongering offspring is his willingness to be un-vampiric. In order to gain long term advantage, Sengir sets aside the shark and allows himself to play the wolf in sheep's clothing. While lesser vamps would solve all problems through mystical stares and bloodthirsty bites, Sengir uses his mind to win the day.

In order to completely dominate the An-Haava and Aysen peoples, Sengir ordered his undead legions to pull out and ignore them. After so many generations of vilifying Sengir, the citizens of these nations ceased to have any common enemy. They fell into civil disagreements, bickering, and strife. After some years without any sense of purpose or common goal, these two populations were ripe for the taking.

Another example of Sengir's savvy was the creation of the royal hunters. When the Baron found out that he had enemies within the forests of Ulgrotha, he laid plans instead of laying waste to the forest. Not knowing what hid within the depths of the wood, he found himself a hunter who would do the reconnaissance (and some of the killing) for him. He did not extend the toothy welcome to the hunter- it was crucial that he fit in among the forest people. The hunters brought Sengir information, and the heads of important woodland enemies, for generations. The hunters passed on their secrets to their children, knowing that the hunters would be treated well by the Baron. One of the Baron's favorite hunters was Veldrane. He lead many successful missions into the Great Wood, but neither Veldrane nor any other hunters were able to discover the Autumn Willow - the secret power of the wood.

Sengir has not found the secret of the wood, nor has he taken over Ulgrotha (yet, bwa-ha-ha-ha.) While he is nasty-powerful, he does have a knack for making enemies. Though they may not be as downright deadly as he is, the heroes of Ulgrotha have kept Sengir in check.

Meanwhile, around the multiverse, his seed still spreads. Sengir vampires are known to haunt the skies of Magic's worlds. Other vampires taint blood in Dominaria, Ravnica, and Mirrodin. Are these vampires products of another great progenitor, or were they magically pulled from the Sengir line by crafty necromancers? For that matter, how did Sengir come to be a vampire in the first place - was he the product of a crafty necromancer, or the focus of a convergence of death and black mana? These are tasty questions - tastier, I think, than the answers would be. So I will not speculate on them. Will the Ulgrotha Sengir ever be reunited with their otherworldly brethren? Will we see them again in Magic's future? That is a tasty question that I will most-definitely not answer. I will say is that there was a sneaky little portal to another plane buried deep within Castle Sengir . . . and that the fabric of planar existence is constantly folding and unfolding . . . planeswalkers are bopping around and takin' hitchhikers everyday . . .

Before I bust out, here's a little random TTM Magic vampire blather:

Mephidross Vampire – Sweeeet. I love the departure from the dusty old coffin-dweller gag. His “fangs” are on his hands, and they're huuuuge! I am sure the story behind this guy is loads of fun.

Repentant Vampire – Oooh, a White vampire. Discuss that amongst yourselves!

Skeletal Vampire – Sure, this guy's name fits him too. In fact, it absolutely could not fit anything else. Still, floating fangy bones with chiropterous entourage is great fun.

Soul Collector – Best-Vampire-Art-Ever! I love the concept of the powerful petit dominating all the big shlubs.

Treacherous Vampire – See Skeletal Vampire, but add a little skin to the bones.

One note about last week's field trip to artist websiteland - the lust that we've provided is a growing list. It contains all of the artist websites that we know of, and will continue to grow as we find more. For those of you who are wondering where Kev Walker's website is - well…we're wondering that too. As far as we know, he (and a bunch of other artists) do not have 'em. If you happen to discover a Magic artist's official website, please email it to me and I'll add it to the list.