week's Taste The Magic is really just a super-sized answer to an Ask Wizards question. It's a question that needed the space and graphic capabilities of a full article to properly address.

With the advent of digital media in the cards' illustrations, does this mean the death of the oil and water color paintings in Don Hazeltine and Rebecca Guay that we so love and adore?

Before I address Vincent's question specifically, I'd like to share with all of you a frightening little tale. It is the story of a computer program called RT3000. This is the tool that Magic artists are going to be using in the future. It will obsolete paints, pencils, scanners, Photoshop, Painter, and all the other tools Magic artists currently use. In fact, most current Magic artists will be obsolete as well, since RT3000 does not actually require an artist to operate. 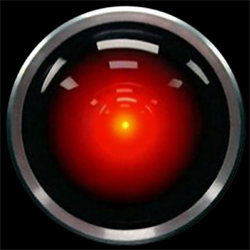 RT starts the user off with a long list of questions, and other questions based on the answers to previous questions. It will ask general questions like, “What size will your art be?” and “What genre of art will you be making?” all the way down to “How many eyes will your 1.anthropomorphic•female•tall•thin•light-skinned2.reddish-brown•toad-like3.screaming•leaping•armed4.sword•flaming•two-handed5.warrior•barbarian have?”

After answering all pertinent questions, the user clicks the “Paint” button and RT3000 will construct your piece of art based on the answers given. It's really amazing. There are no muddy colors, no wonky anatomy, no incorrect perspective. It's a perfect toad-headed barbarian every time!

Aaaaahhh! Wake me up from this nightmare! For those of you who are not familiar with how “digital” art works – this is absolutely not it. The most important thing we all need to recognize about digital art- before we deal with any specifics- is that

It only takes the place of the paint, not the artist.

Now, back to Vincent's question. Will digital media be the death of oil and watercolor paintings? This is a question that each oil and watercolor painter will have to answer for his/herself. For example; I love nothing more than holding up a painting after days and days of nurturing it and sweating on it and toiling with it, to gaze at it and smell it and feel it and cherish it as a piece of myself shed for all to see. It's why people go to museums - to capture a bit of this feeling and to feel the “presence” of the artist. But! There's always a but. But, with all of this wonderment available to me when painting in traditional media, I have not touched a paint brush in over a year. Sacrilege! 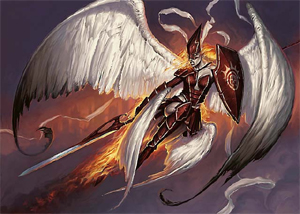 Well, it just so happens that, in my current situation (a full time job, two kids under 3 years old, and an audience of hungry Vorthoses), mixing paints and preparing canvases is just too much to handle. So it is the computer that has come to my rescue. It does not do my work for me, and it has not changed my artistic sensibilities. All it does is allow me to paint without mixing colors and having them dry out when I run upstairs to give the kids a bath. In fact, I have had at least five offers to buy the original painting of Firemane Angel – a painting that does not exist, because it is 100% digital. Not even a pencil sketch on that bad girl.

Will the computer be the death of traditional media – maybe. But I can tell you this; I am aching really bad for an opportunity to sling the pigment again. I would imagine other artists raised on traditional media will feel the same way. I cannot speak for the new budding breed of artist that has cut their teeth on digital media. They may never feel the pull back to paints and pencils.

One thing that we have to remember is that the computer is not taking away from the artist his or her vision. Don Hazeltine and Rebecca Guay would produce similar work on the computer as they would on paper. It might take some time, but eventually the digital path would lead straight to the promised land – the artist's vision. I have always thought the greatest artists were the ones whose work spanned many different media. These artists are not just skilled at watercolor or pen and ink, they're skilled at communicating what is dancing about in their imaginations. The computer will never take the place of the artist's imagination (well, for the sake of sanity, I will believe that).

So what does this have to do with Magic cards? It means you should not worry that your little cardboard fantasy art gems will ever become little screen shots from Tron. Magic artists will continue to dish out beasts and wizards and dragons with the same grit, beauty, and pizzazz that they always have. The only difference will be that the tiny percentage of you who admire or buy original paintings will have to settle for prints. 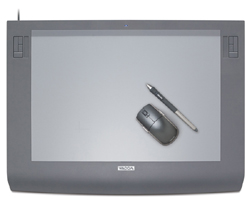 In case some of you are still stuck on RT3000, here's how digital art actually works. Most illustrators working with computers use a piece of hardware called a WACOM tablet and stylus. The tablet functions as the painted surface and the stylus as the paint brush. The artist moves the stylus around on the tablet like a mouse on a mouse pad. The “painted” marks show up on the computer screen instead of on the tablet. It really is just like painting, but without the paint. The artist's hand is still in control. Dexterity, fluidity, and drawing ability are not improved or altered by the computer. In many cases, artists work on the computer the exact same way they work in paint- starting with sketch, moving to color and value blocking, then adding texture, detail, and color over the top until finished. Justin Sweet is my favorite example of a Magic artist whose work is 100% digital, but still retains the life and style of his traditional painting. 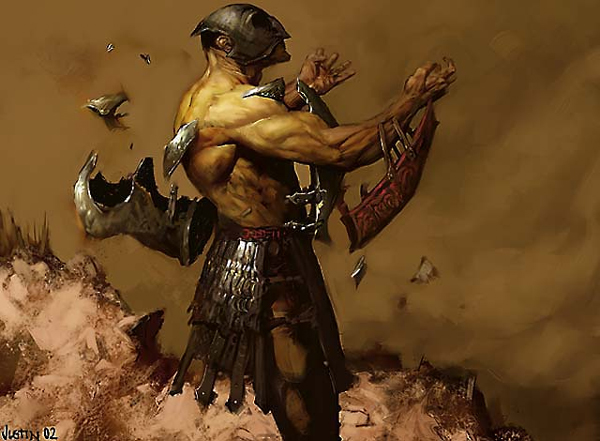 If there was any fear that the computer would sap art of its painterly quality, Justin proves it does not. Oh, and his Elves of Deep Shadow (above, left) is done in oil paint. I snuck it in there to show how faithfully an artist can translate his vision and style using digital media. Try to figure out which of Greg Staples paintings below is digital.

There are other ways to use digital media that are not so start-to-finish. Some artists do sketches in pencil on paper, then scan them into the computer to paint. This way, they bring some of the feel of their traditional style to the computer for finishing.

Some artists work the other way around, using the computer to block in shapes and background elements, then printing it out and painting on top of it in oil or acrylic paints. One of Scott Fischer's paintings below is done this way, while the other is done completely on the computer- again showing that digital media does not change artistic vision.

Magic artists also use the computer to put finishing touches on art that is painted traditionally. They will scan or digitally photograph their paintings and add accents, color shifts, or other touch-ups using Photoshop or another similar tool.

There are probably a bunch of other ways Magic artists use digital media to work their wonders. Whatever method artists choose (I am starting to sound like a broken record here, but it's important to note) does not change the voice of the artist.

And that leads me back to Vincent from New York. He loves the work of Don Hazeltine and Rebecca Guay, but he is worried that their delicate touch might be lost to the mechanical feel of the work of digital artists. (After seeing the work of Sweet, Staples, and Fischer above, we know that's a bogus statement, but I am setting up the knockout punch here).

Of Don Hazeltine's 40 Magic paintings, 12 of them are digital, including the two above. I am not going to list the ones that are, because it really doesn't matter. If it did, you'd be able to tell right off the bat which ones were done by RT3000. I think this might soothe Vincent's heart a bit, knowing that the sort of art that really floats his boat is absolutely possible using digital media.

On the flip side of the argument; I encourage any of you who lament the move toward digital art to make the one move that will encourage Magic artists to stick to traditional media – go buy some art! Nothing touches an artist as much as the person who says, “I would like to own this little piece of your soul… here's some cash.”