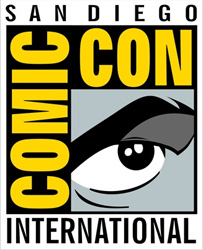 an Diego ComicCon is fast approaching, taking place this year on July 18-21, 2013! Magic will be there doing a few things and we want to tell you about them!

Come to the Magic panel and get a preview of some of the exciting products and events that are coming up this summer and beyond for Magic! Join Mark Purvis (Brand Director), Mark Rosewater (Magic's Head Designer), Jenna Helland (Magic Creative Designer), and Dave Guskin (Magic Experience Designer) for this discussion and Q&A.

The panel will not be streamed but it will be recorded and posted online after the event.

Every day there is a free Beginners League where players are given a 30 card half deck and are able to win a promo card. More advanced players will love the All-day Intro Pack League. Pay $15 and receive a Magic 2014 Intro Pack deck and play as much as you want for the entire weekend. Players match themselves in casual matches and earn a Magic card after every match, win or lose.