Looking for some creative ideas on how to play Magic with your friends? Sanctioned Magic: The Gathering formats provide rules and instructions for a multitude of ways to play that are the same the world over, from the kitchen table to the Top 8 of the Magic: The Gathering World Championships.

If you're ready for something really different, check out the official rules for the Two-Headed Giant multiplayer variant.

Click on a category name on for more information about what each format has to offer you!

In a Constructed format, you build your deck in advance, using the cards in your collection. A Constructed deck must have a minimum of 60 cards, with no more than four copies of any card (excluding basic lands). With so many different Magic cards in existence, one of the main variations in Constructed play is what cards are legal to have in your deck in a given format.

The Standard format uses only the newest sets the game has to offer. The current block, the block that was released the previous October, and the most recent core set are all legal to play in a Standard deck. As you can tell from the name, Standard is the most commonly played format. Standard events are available year round at retailers and tournament venues worldwide, offering new players a great opportunity to enjoy a tournament setting with the cards they've recently purchased.

What is Block Constructed?

The Modern format consists of all Magic sets printed since the introduction of the modern card frame, starting with Eighth Edition and the Mirrodin block. Card sets do not rotate out of Modern.

The Vintage format allows players to use cards from every Magic set in existence. You can play with cards from the very first release of Limited Edition (Alpha) in 1993, all the way up to the sets you can buy right now at your local retailer! Because so many cards are available for play in the format, Vintage offers some of the game's most powerful deckbuilding options.

The Legacy format is Vintage with a twist. While all Magic: The Gathering sets are legal in Legacy, just as they are in Vintage, some specific cards are prohibited from play in the format. This creates an entirely different flavor for the format and offers up new creative challenges for players building decks for Legacy competition. Not quite Vintage and not quite Standard, the Legacy format is truly a unique experience for Magic fans.

Looking for a way to play Magic that doesn't require you to already have cards? Limited formats are exactly what you're looking for. Unlike Constructed formats where you play with an already built deck, Limited formats require you to build a deck from a defined pool of cards. This pool might be defined by the contents of a few booster packs that you open at the event, or it may be from cards that you select in a Booster Draft.

What is Sealed Deck?

The Sealed Deck format allows players to use the Magic booster packs they're already buying to play games in a casual or tournament setting. Players simply open six booster packs and build a deck from the cards they opened. Guidelines require a minimum deck size of 40 cards and allow players to add as many basic lands (Plains, Islands, Swamps, Mountains, and Forests) to their card pools as they like. If you're looking for a fun way to increase the size of your Magic collection and play the game at the same time, the Sealed Deck format is for you!

What is Booster Draft?

Have a group of friends who want to enjoy playing a format together? Booster Draft is exactly the format you're looking for! Instead of just opening your cards and building a deck, you and the other players at the table (four to eight total) have to draft the cards for your decks.

At the start of a Booster Draft, each player opens a booster pack and picks the card he or she wants from it. (You can't see the cards that the other players draft.) Then each player passes the rest of the pack to his or her left. You pick up the pack that was passed to you, select a card, and pass the rest to your left. This process continues until all the cards have been drafted. Next, each player opens a second pack, but this time, you pass the pack to your right. After all those cards are drafted, you open the third pack and pass to the left again.

Here's a diagram of the process of passing the packs:

Once all the packs have been drafted, players build decks from the cards they selected, adding as many basic lands (Plains, Islands, Swamps, Mountains, and Forests) to their decks as they like. Each deck must have at least 40 cards.

Each pair of players then plays a match, which consists of the best two out of three games. In the next round, the winners play against other winners (and the losers against the losers, if you like). The player who wins all three rounds—or all three matches—is the winner. It's a great way to spend a few hours with your buddies.

What is Two-Headed Giant?

Have you ever wanted to play with a friend as a team? Two-Headed Giant (2HG) is a great format for players looking to do battle alongside another player against another team of two players and you can choose whether you want to play Constructed or Limited games! To start, players sit next to their teammates, like this: 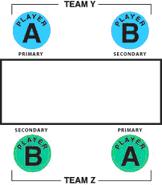 Both teams start at 30 life and each team shares a turn. You don't need to worry about sharing your cards though, as all four players have their own separate decks. You'll draw from your own library and tap your own lands to pay for spells, just as in a regular Magic game, but with all the fun of sharing that experience with someone who wants you to win just as much as you do! Two-Headed Giant is a great format to help new players learn the game, because you can talk with your teammate, give advice about what cards to play, and strategize together for the best way to defeat the opposing team.