know things that others don't. You know something really bad is going to happen. And it's something earth-shattering, horizon-altering, dark-magic bad. You're one of the smartest creatures on the plane—maybe the smartest—and if anyone can change what's about to happen, it's you. So you ponder all the potential solutions, the various equations, and the infinite possibilities. And you reach this conclusion: You can't stop it. So what's your next best option? Beat it at its own game.

This was the situation facing Colfenor, the Last Yew. Lorwyn's denizens believed Colfenor to be the only yew remaining in Lorwyn, and he had the reputation of being taciturn at his best, and downright surly most of the time. Everyone agreed he was very wise, but his motivations were never clear, which made him suspect to the kithkin and elves alike. The treefolk gave his pupil, an elf named Rhys, an important task: to plant Colfenor's seedcone in the sacred Murmuring Bosk where the yew himself had been born and nurtured.

"I am the oldest of my kind . . . Long ago, I received the whole of my tribe's arcane lore and wisdom, magic and traditional rites from ancient days. Before I die, it is my responsibility to pass that on. My own memories and experiences must join with those of my ancestors." —Colfenor, Lorwyn novel

Colfenor was wiser than the inhabitants of Lorwyn ever imagined. He knew about the upcoming Aurora, an event that could irrevocably alter his idyllic world. He understood that the natural order had been twisted, and that Lorwyn might be lost forever if he didn't do something about it. Like a conductor of a grand symphony, he selected key players as his instruments and orchestrated a series of events to ensure his survival and the survival of Lorwyn.

"A single definite thing connected them: the actions of Rhys's mentor, Colfenor. The great yew sage had intrigued maddeningly impenetrable designs. Through Gaddock Teeg—the late mayor of Kinsbaile—Colfenor had sent Ashling to find Rhys, and Brigid to abduct Ashling. The great red yew used the pilgrim to power a terrifying ritual, fanning her innate elemental flames into a sacrificial inferno that the treefolk sage then threw himself upon. As he burned, Colfenor spoke of a profound change, a catastrophic upheaval that soon would shake Lorwyn to its roots" —From the Morningtide novel

"The treefolk are the most ancient of Lorwyn's races and have the longest lifespans by far. When they're young, they stay in their groves, absorbing the wisdom and oral history of their elders. When they're mature, they wander the world alone, seeking those worthy of their shelter." —From the Lorwyn Style Guide

Instead it took very little time for a six-foot sapling to emerge from the seedcone. She developed much faster than expected and was able to walk and talk freely, much to everyone's surprise. No one had seen anything like it before.

Meet the Sapling of Colfenor: 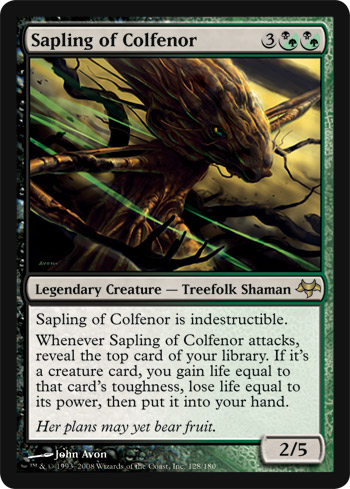 If Rhys hoped for answers from the mysteriously quickly growing Sapling, he was soon disappointed. The Sapling was unable to explain Colfenor's purpose or why the scheming yew acted the way he did. As the reincarnation of Colfenor, the Sapling possessed all of the old treefolk's knowledge embedded in her consciousness, but she couldn't yet sort through the information and bring to the surface the answers that Rhys needed.

"The sapling's inability to tell him what he needed to know was maddening, but he could not fault her for it. Through Colfenor, she was the inheritor of every last scrap of yew knowledge and lore from the very beginning of history. He couldn't expert her to produce specific details of her sire's last great act when she couldn't even tell him her name. . . Until she learned the language of Lorwyn itself, the sapling simply could not articulate the answers to the questions they had." —From the Morningtide novel 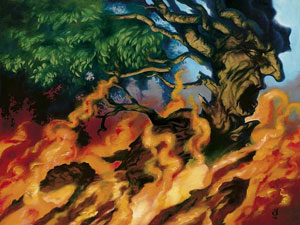 The Sapling was an everlasting spiritual vessel, but she was also physically indestructible. In the Morningtide novel, she nearly burned to death while crossing a narrow span of rock over a river of molten lava. And she was burned severely by her reluctant ally, Ashling the Pilgrim, during a battle. But still she endured.

"The sapling didn't answer [Ashling]. Most of her face was blackened and charred, though no longer ablaze. The only needles she had left were on the bough upon her back. The others were little more than blackened sticks. Her hands, though cracked and brittle, appeared more or less intact, but they were dripping with blackened sap as the tortured sapling struggled to heal the worst of her burns." —From the Morningtide novel

The Sapling's adventures continue in the Eventide novel by Scott McGough and Cory J. Herndon. Like most of the inhabitants of Lorwyn, the treefolk have become twisted and dark. Most treefolk are inflicted with a disease known as the canker, which rots their bodies and discolors their bark. New treefolk are seldom born in Shadowmoor, and those that skulk about the land seem crazed and manic. This is the world that Colfenor dreaded, and one of the reasons he schemed to preserve his memories and wisdom beyond the Aurora.

"The treefolk perceive themselves as a dwindling race, being felled one by one as disease, fire, or the axes of their enemies overtake them. This fuels a deep malice against other life." —From the Shadowmoor Style Guide

Although Colfenor didn't get his own legendary card, the old yew made a few choice appearances in Lorwyn and Morningtide.

Let's look at how the Sapling's storyline and mechanics are intertwined and how you can make the most of her abilities as you continue your journey across the treacherous landscape of Shadowmoor. In general, Sapling of Colfenor is good with low-power, high-toughness creatures that allow you to gain more life than you lose, such as Wall of Roots, Battlewand Oak, Treefolk Harbinger, and Verdeloth the Ancient. Pair her with the ever-powerful Doran, the Siege Tower to gain 5 life. With Doran, all your low-power, high-toughness Treefolk and other creatures suddenly become a lot more lethal. She's a Shaman, so she has nice interplay with Morningtide Shamans such as Wolf-Skull Shaman, Bosk Banneret, and Rage Forger.

Since she only has a 2 power, she's easy to block, but you'll want to attack with her as much as possible to get the most out of her ability. Use Blight Sickle to give her more bite and make blocking her a tougher decision. Or better yet, Whispersilk Cloak makes her untargetable and unblockable so you can attack, gain life, and fill your hand with creatures, especially if you're dealing with a lot of wither blockers in your opponents' decks.

Since the Sapling is indestructible, look for cards that work with her ability to survive situations that other creatures can't, whether it is the fiery inferno of an elemental or the landscape-blasting Great Aurora. She'll endure cards like Wrath of God, Damnation, and Magus of the Disk. You can use Pariah to make her take damage instead of you, or play Outrider en-Kor to redirect damage from your other creatures onto her.

The Sapling of Colfenor defies the natural order and matures much faster than expected. You can make your deck do the same by filling your slots with creatures with "comes into play" effects. Use Shriekmaw or Nightshade Assassin instead of Terror. Elvish Hexhunter, Viridian Shaman, and Woodfall Primus substitute for your enchantment and artifact kill. The enchantment-offing Wispmare is a good choice for a Doran deck. Use Mulldrifter and Phyrexian Rager to gain additional card advantage.

This yew has all the answers. She just needs a strategy to bring them to the surface. Cards like Hunting Wilds, Civic Wayfinder, and Terramorphic Expanse improve your card quality by thinning the land from your deck. Cream of the Crop and Gilt-Leaf Seer will let you put the cards you want on top of your library. And Gilt-Leaf Seer combos nicely with the shuffling effects from the cards that thin your deck.