Save Kamigawa? I Didn’t Even Know It Was in Trouble

One of my first tournament experiences was getting to play with Alliances™ before it was ever released. Some of my friends and I went to Three Rivers Game Fest in Pittsburgh to check out a bunch of new games and find some cards to add to our favorite Magic® decks. While we were there, we heard a rumor that a tournament had been added to the Sunday schedule, an early release event for Alliances! We all knew that Alliances was coming out soon, but not yet. We were only planning on staying for one day, Saturday, but we decided that this was worth the drive back on Sunday morning. So, my friend John and I woke up early and made the drive from West Virginia to Pittsburgh to see if it was really true. That Sunday I had a chance to play with cards I had never seen before and meet a lot of players from all around the area. None of us won anything that day, but we had a great time and received some cards from a set that none of the other players in our playgroup would have for weeks.

Ever since that first experience, I have been hooked on going to Prereleases. I can’t say that I have been to every one since then, but I have been to just about all of them. Recently, most times I have attended Prerelease tournaments, it has been as a judge, but I still try to find some opportunities to play with the new cards and take some home before they are in stores.

A Prerelease is, by far, the most fun tournament to attend as a player or a judge. The atmosphere is very casual and everyone is looking to have a good time. Most Magic players spend a lot of time studying all of the cards, so when a new set comes out, it is vital that you get some of the new cards to see what new tricks you can learn with them.

Enter the Saviors of Kamigawa

Saviors of Kamigawa™, the newest expansion for Magic: the Gathering, will be released on June 3; however, you don’t have to wait until then to play with the newest cards. On May 21 and 22, you can play in a Prerelease for this latest expansion. Be among the first to meet all of the newest Legends battling in the Kami wars, and master all of the arcane spells that Planeswalkers across the Multiverse will be using.

To play in any Prerelease tournament, you will need a DCI® number. If you don’t have one, the organizer of the event will be able to provide you with one. This number will allow you to play in future events and keep track of your match history. Also, you will be able to track your rating versus other players in your area and around the world. A DCI number also enables you to sign up for the Magic Player Rewards program.

When I attended the Stronghold™ Prerelease in Columbus, there were over 1,000 players all competing in the same event. Now things are a little different. In addition to one big tournament, most Prereleases are also broken down into flights. A flight is a smaller tournament that has a predetermined number of players in it, normally 16, 32, or 64. Once enough players have signed up, the tournament can get started. 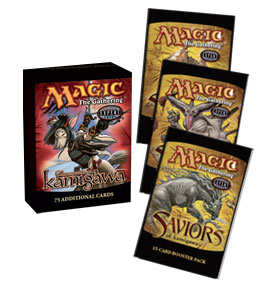 At a Prerelease tournament for a small expansion like Saviors of Kamigawa, each player will receive a tournament pack of Champions of Kamigawa™ and three booster packs of Saviors of Kamigawa. Some tournament organizers will require that players register the cards they receive, and then either a judge will collect the cards and registration form and redistribute them, or the players will pass the cards they registered in a random direction. Make sure you pay close attention to the instructions of the judge running your tournament so you know exactly what to do. Once you are done registering, you will use the cards you have to build a deck. This deck must be a minimum of 40 cards and may contain as many basic lands as you wish. Any cards you don’t use in your deck will be in your sideboard, and you can switch in or out any cards you want for games 2 and 3 of a match. Just make sure that your deck is back the way you registered it for game 1 of every match you play.

Once you have constructed your deck, you get to play against other players in the tournament. The number of rounds you play will be based on the number of players in your flight. Generally, these flights will have around five rounds, and they are run using a format called Modified Swiss-style. This format allows players to continue playing even if they lose, but if you want to leave the tournament, you can inform the scorekeeper and drop to play in a different event.

Most Prereleases will also offer Booster Drafts. These are normally eight-player tournaments that are run single elimination, so if you lose one match, you are out of that tournament. In a Booster Draft, players sit around a table and open packs. Players each keep one card from the pack they opened and then pass the rest to the player next to them. You get to take a card from each pack and you pass it around the circle until all the cards from that pack are gone. Then, you repeat this process with a second pack going in the opposite direction. You get to do three packs in all, which will get you a total of 45 cards from Saviors of Kamigawa. Pick the best ones, add the basic land you would like, and then you are ready to play. Remember, your deck has to have at least 40 cards.

Are you going to the Prerelease with a couple friends? If so, some Prereleases offer team events. A team consists of three players, and you get to work together to build three decks out of two Champions of Kamigawa tournament packs and six Saviors of Kamigawa booster packs. This is a great way to share the experience of opening cards from the new set with your friends.

Prizes for each of these events are determined by the event organizer; however, if you do well, there is a good chance you might be leaving with some extra Saviors of Kamigawa booster packs to open on your way home.

Beginning with Tempest™, Wizards of the Coast® and the DCI have provided a special card to be given out to players that attend a Prerelease. The card is normally foil and has the date of the Prerelease event stamped on it in gold. This Prerelease card is normally a powerful rare card that has a new ability from the set or one that fits well into the theme of the set. Each time you enter into the main event or a flight at the Prerelease you attend, you will get one of these cards while supplies last.

Whether you are a long-time player or relatively new to the game, the Prerelease is for you. There are lots of opportunities to play and get cards from the newest expansion for Magic, as well as chances to meet new friends and learn new tricks. Find out where the closest Prerelease event is to you and show up on May 21 and 22—you are sure to have a great time. Oh, and if you are in Columbus, be sure to say hi—I just might be judging your flight!