hen a world's best, maybe only, hope for survival is a ronin samurai with few morals who wouldn't care a whit about Kamigawa were he not living on it, you know the situation's grim. Yet the very name of the final chapter of the block, Saviors of Kamigawa, suggests that there is hope. But does it lie with Toshiro Umezawa, one of the most popular Magic protagonists of all time, or elsewhere, perhaps with Michiko Konda? Either way, Kamigawa had better hope that it lies somewhere.

When we last left this besieged world, it had become even more troubled, if that were possible. The Minamo, School at Water's Edge was sacked by Heartless Hidetsugu and his oni. The soratami started even deeper plotting, hoping to take some advantage from the chaos. Worst of all, O-Kagachi, mightiest of the kami, has come to the material world. But his arrival has deeper consequences than mere death and destruction, though it has certainly wrought that. So powerful is his essence that his travel between the kakuriyo (spirit world) and the utushiyo (material world) has weakened the barrier between the two. What does this mean? It means that kami have a much easier time traveling from their home to Kamigawa proper, and when they do, they are much more powerful. 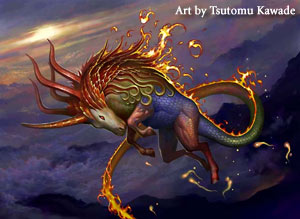 Many new types of kami have taken advantage of this new path between worlds to join their fellows in the war against mortals. The kirin are among the most powerful. Part horse, part sea creature, the kirin are generally thought of as benevolent spirits, signs of good fortune and plenty. However, as one piece of flavor text from the set tells us, “even the most benevolent and life-giving of kami joined the war against the mortal world, but only with heavy and sorrowful hearts.” But no matter what their personal feelings, they must avenge O-Kagachi's loss, and that they do, with a vengeance. Their special brand of spiritcraft has not been seen on Kamigawa in ages, and they will use it against the humans, and anyone else who stands in the way. Similarly, the spirits of great figures from Kamigawa's past have also emerged. Their infinite wisdom is being brought to bear in the Kami War, but it's probably a safe bet that their descendants probably won't be on the receiving end of that power.

But we can't forget the onna. Ghosts that take the vague form of human women, these spirits were once rare, with few sightings among the wild places they called home. This was fortunate, since their beauty and power could bring any mortal to his knees. But with the coming of O-Kagachi they have manifested, and their treachery has been the doom of many a mortal warrior. Shinen, spirits composed of a kind ectoplasmic energy (shinen means “spirit fire” in Japanese), also wander Kamigawa in droves, along with lantern-carrying kami. These spirits, powerful on their own, can give up their own lives to add their essences, and their abilities, to their allies. Thus, mortals are in danger from kami both living and deceased.

In the middle of all of this, That Which Was Taken has been… well, taken. Again. This time, Toshi is the one who possesses the powerful artifact. He has made a deal with the Myojin of Night's Reach for both power and protection, though it's safe to assume that neither values the alliance very highly. He'll need all the help he can get, though, because many of his past actions, most of which include some sort of betrayal and double-dealing, are starting to catch up to him at the worst possible time. With his theft of the young kami, he has a very large bullseye painted on his head, and a very hot potato in his hands. While he tries to figure out what to do with his new prize, and how to use it to save Kamigawa (and his own skin), Princess Michiko is also on the move. With her kitsune allies, she struggles with recent revelations about her role in the Kami War. She'll have to overcome many forces, including her own guilt, to succeed. In fact, with both O-Kagachi and her father searching for That Which Was Taken, it'll be a sticky web to negotiate indeed. 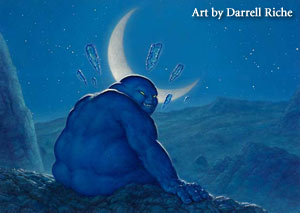 In the background of all this is the Smiling Kami of the Crescent Moon, "Mochi," who's been running around behind the scenes this entire time. We've watched him plot, scheme, and assist Toshi when it suits his purposes. He's probably the most mysterious figure in this whole conflict: a kami whose loyalties and schemes aren't clear. How will he reveal himself? What ties does he have to the Kami War as a whole? We'll find out, but only when he feels it safe to do so. By then, will it be too late?

Of course, as the last set in a block, with this sort of trouble brewing, there will be plenty of casualties, many of whom will be very familiar to storyline fanatics and casual fans alike. Action will come from unexpected sources. Matters will be resolved, but probably not in the way you may think. One thing is for certain, though: whatever happens, Toshi will be there, ready and willing to turn it to his advantage.

And so we come to the Saviors card preview. You may have noticed a pattern with my past cards: Konda, Lord of Eiganjo in Champions, Toshiro Umezawa in Betrayers. There are plenty of characters to choose from, and though I could discuss Mochi (I won't, but I will say that he mimics the ability of a classic artifact), the storyline demands that Michiko get the honor this time around. It's a neat progression, one that might not have come about had original plans to have all three top tier characters in Champions gone through (just as Kentaro, the Smiling Cat was originally Toshi, so Masako the Humorless – or at least her ability – was originally Michiko). I could go on and on about her character: her independence, determination, and skill. But I know you all want to see the actual card, so without further ado, here it is. 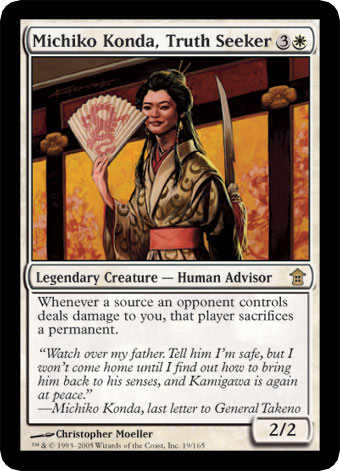 Now this is what Karmic Justice should've been! Michiko, as we've seen her in the novels, is a woman with a lot of strength, but one who never uses that strength in an aggressive fashion unless forced to. Her card is a perfect reflection of that aspect of her character. She just sits on the table as a 2/2 white creature, unless your foe makes a move against you. Then the gloves are off!

Obviously, Michiko puts a big hurt on a weenie strategy that needs few lands. Those decks will only get to hit with its small creatures once, then they go bye-bye, or else lose some of its precious lands. But observe that her ability triggers off of any damage, not just combat damage! That means “pingers” like Frostwielder become a less attractive option in a stalemate, and cards like Honden of Infinite Rage lose a good deal of their effectiveness. Those annoying damage-dealing permanents will probably be Michiko's first victims! There are plenty of decks and strategies out there that depend on dealing small amounts of damage many times over. Michiko quietly puts a rather big kibosh on those plans.

Michiko may be a purely reactive card, but that doesn't limit her general usefulness nearly as much as other, similar cards. Even if your opponents don't play the decks she's best against, her mere presence can make them think twice about counterattacks and direct damage. Making foes doubt their next move is always a good thing, and Daimyo Konda's daughter does that in spades. Play her in your next game and watch your enemy start to think a little harder!

There are so many twists, turns, and surprises in the Saviors of Kamigawa story that it's hard to go into too much detail without ruining something. But trust me: you'll be amazed at what both novel and cardset have in store. The folks in R&D have made Kamigawa's third act one to remember, so make sure you have a front row seat for it.