is all about the revelation of secrets. The eternal day/eternal night changeover. The mystery behind the Aurora revealed. The bizarre new identities of all the world's races. The emergence of strange creatures and demigods from their hiding places.

Today we reveal one of the most fundamental secrets of the plane—the nature of Oona, Queen of the Fae.

If you're an avid flavor text reader—and I'd like to think that, even given that our paths are crossing during a card preview week, you'd be proud of being described as such—you might feel like you already know a lot about Oona. The Lorwyn and Morningtide sets already dumped a lot of clues on you.

Faeries seem to appear out of nowhere, but in truth they flower from the body of Oona herself. She's a kind of ur-faerie, a being composed of the essence of the fae and yet greater than them too. The embodiment of faerie fertility, she is the genesis-being that gave rise to their entire race. Some have belittled her with a simple analogical description "she's like a flower," but this doesn't do her justice. She's an organism of thousands of petals, forever budding tiny insect-like faerie children off into the air around her, hovering in Glen Elendra for all to pollinate.

A faerie is the offspring of Oona and mischief.
(Violet Pall)

Only in dew from Oona herself is there clarity enough to see a victim's mind. (Dewdrop Spy) 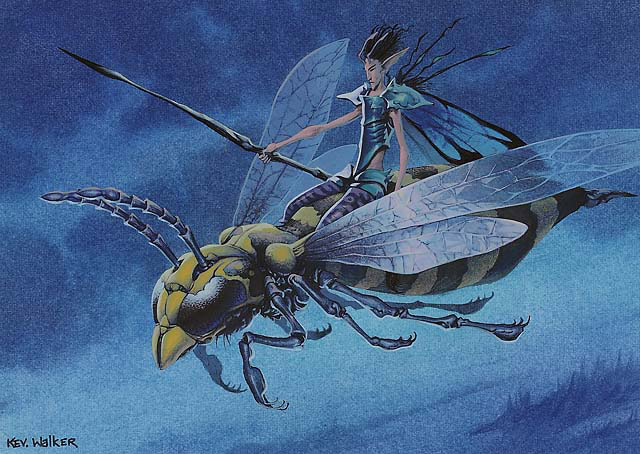 I believe it was Magic art director Jeremy Jarvis's idea that the Queen of the Faeries should be this enormous floral creature, part hive-queen and part hive itself, and that all the insectile faeries would buzz around, pollinating her. The idea of harvesting dreams and returning them to the Queen came after, basically from one visual: 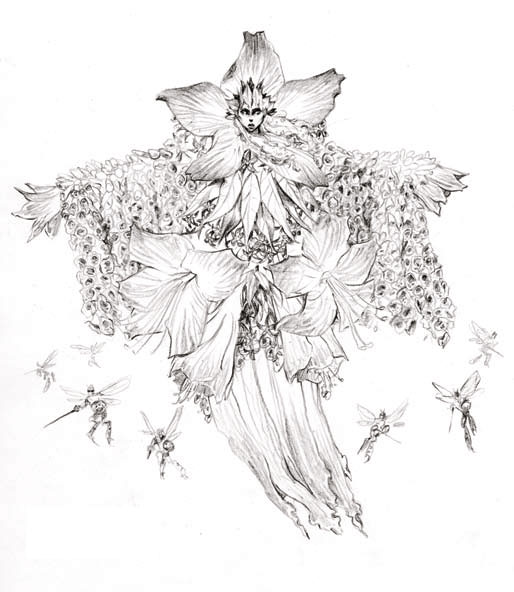 Black and Blue (and a tiny bit more) 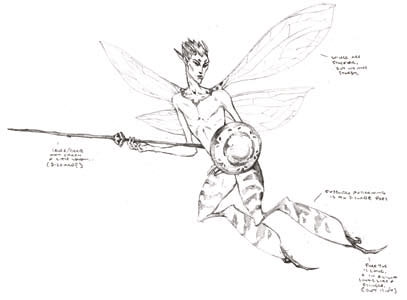 Of all the Lorwyn races, faeries were the one race that didn't change color affiliations. They're still predominantly blue and black, just like they were in the Lorwyn days. They still fly and some of them still have flash. They're still capricious, mischievous, and occasionally cruel. They still harvest the dreams of others throughout the plane—although the dreams they've been reaping have been decidedly darker of late.

There is a bit of a new twist with the faeries, however. They're expressing a little more of their hierarchical, honorable side. The shift of the plane from day to night has put Oona more in the driver's seat, consolidating even more power over the plane in her hands. She doesn't wish harm to the plane—far from it. She just wants to make sure she continues to stay the head honcho of this fairytale world into its nighttime incarnation. This is reflected in the fact that a couple of faeries appear in a new color, a color focused on the maintenance of the status quo. They're still definitely rooted in blue and black, but the power of hybrid mana is letting them slide just a touch in a new direction. 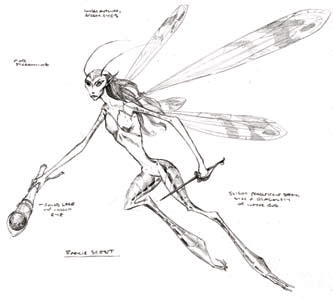 So Oona's faeries are showing a new sense of duty in Shadowmoor (although mostly to the Queen herself). On the other hand, most of the faeries are as vicious as they've ever been. Their tricks are nastier, their harvesting of dreams has become ever more frequent, and their movements are harder to stop under the cover of night. Oona herself is the same way—she's the archetype after which the entire race was patterned, after all. When it comes right down to it, the faeries get their identity from her.

Beneath the fae's constant pranks runs a subtler undercurrent of mockery: the influence of Oona, their hidden queen.
(Faerie Tauntings)

The Treasury of Dreams

The plane once called Lorwyn, now called Shadowmoor, is a fairytale world, and Oona is Queen of the Faeries. Especially now that the elves have lost their place as the beautiful tyrants of the plane, Oona's dominion is spreading. Even now—even as feral giants, cunning pucas, monstrous kelpies, and the awe-inspiring demigods awaken from their daylight slumber—Oona remains one of the most powerful forces in the world. And there's one reason: information. 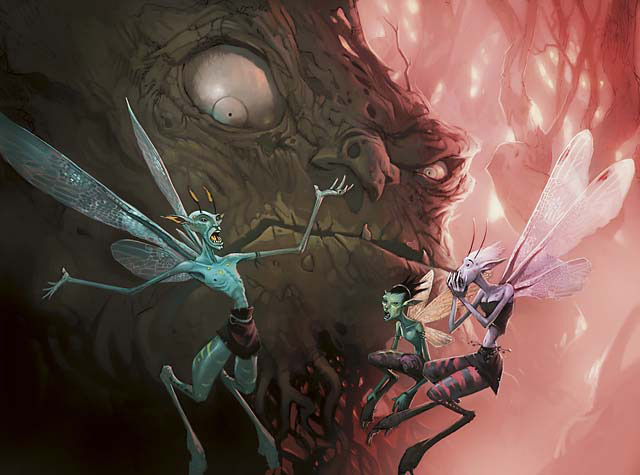 Oona is one of the few beings on the plane who retained her memories across the Aurora. This has allowed her to advance a strategy that spans the entire plane, both light and dark—but it also makes her feel like she has a lot to lose. Oona has begun cracking down on the plane, budding off ever more faerie minions in order to contain certain rebellious elements that threaten to upset her plans. Her faeries bring her the dreams of an entire plane, allowing her to create a kind of dream treasury deep inside her of all that goes on in the world. In effect her faeries serve as her eyes and ears in the lands beyond her glamer-protected Glen Elendra.

Deep in Glen Elendra blossoms Oona, queen of the faeries, nourished by secrets and pollinated by stolen dreams.
(Oona's Prowler)

Oona's song is like a twisted dinner chime. All the faeries return home, but it is Oona who feasts—on the stolen dreams and rumors they serve her.
(Distant Melody)

The Ultimate Power in the Faerieverse

Finally, Oona is a powerful focal point for much of the plane's magic. She's a master of glamers and other magics that make her a subtly potent force in the world. If she were to be displaced or disabled, much would change in Shadowmoor. With her memories of Lorwyn intact, her network of faeries gathering information for her night after night, and her mastery of magic, Oona is probably the most commanding presence on the plane. 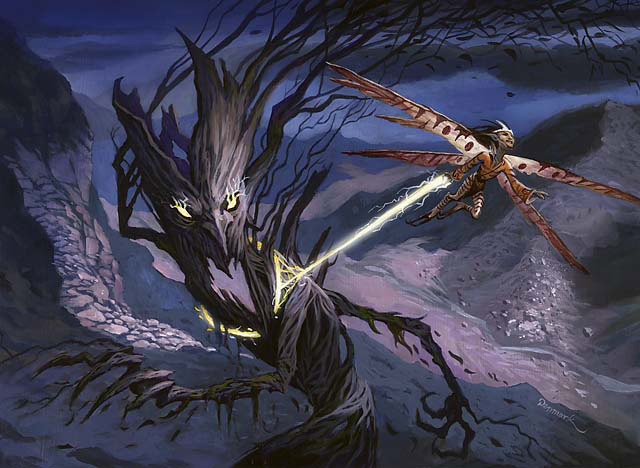 Make Way for the Queen

Without further adieu, allow me to introduce you to .

So, did you remember all the things you were supposed to remember?

Got it. She makes Faerie Rogue creature tokens. You can see little faeries blossoming forth from her floral form. She's the true origin of all the faeries on the plane, and her card shows off this faerie fertility plainly.

– fully castable in a blue deck, a black deck, or any combination thereof, thanks to the power of hybrid mana. She clearly outlines her race's color affiliation with her own mana cost while not making too many demands on either color. She's a monarch, but not a harsh one.

Oona buds off new faeries, but only when she rips through an opponent's library. This can be a force of "milling"—running your opponent out of cards, for an alternate way to win—or simply as a spying mechanic. Oona loves to know all the secrets of everything that goes on in her world. With her library-eating ability, she can reveal your opponent's game plan for all to see, and add those secrets to her own treasury of dreams.

She's a 5/5 flyer for 6 mana. She hits as hard as a dragon. She can still do her faerie-budding trick even while tapped, meaning she doesn't have to decide between attacking and using her ability (I'm looking at you, Visara). 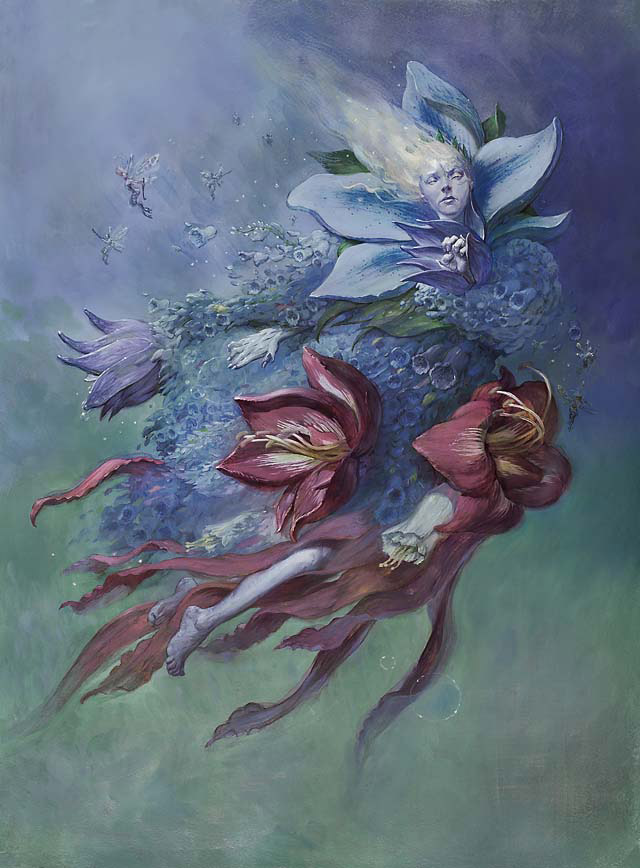 Oona, Queen of the Fae art by Adam Rex

Our letter today comes from Jindrich, who's asking about the fate of changelings after the Aurora.

Dear Doug Beyer,
Regarding your article "The Shadowy Pendulum":
Tell us about changelings. Why did they disappear in Shadowmoor?
--Jindrich K.

Thanks for your question, Jindrich. A lot of people have been asking me the same thing. The Aurora was a cosmological event that caused great change, turning many races into twisted, darker versions of themselves. It also caused other creatures to appear that never existed before on Lorwyn, such as pucas, kelpies, demigods, and even more folklore oddities that you'll see later on. But just as some creatures appeared anew, others disappeared from Lorwyn as it became Shadowmoor. Changelings, as we know them, have gone away.

Now, does that mean that they vanished entirely, or that they are merely changed in some form? They are, after all, shape-shifting chameleons. Could they be lurking somewhere in Shadowmoor in some new embodiment? The new art of ***CENSORED*** depicts Velis Vel, the ancestral home of the changelings, but in its Shadowmoor version, it's filled with water. Reflected in its surface is a magical "echo" of a forgotten world, a sunlit world of green trees and blue sky. No changelings appear to be about, but maybe they've just gone deep underground, either literally or metaphorically.

I'll tell you this: the Aurora was primarily a force of change, not annihilation. Although the landscape of Shadowmoor is radically different, many, many things that live there have a "twinkle in their eye" that reflects the bygone world of Lorwyn. Perhaps in time, we'll see hints that the changelings live on in some new, sinister form.

Stay tuned for next week, when I dig up some of the all-new creature types in Shadowmoor.