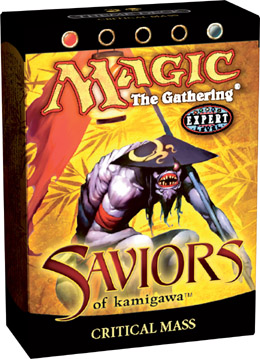 hen playing with the Saviors of Kamigawa set, having more cards in hand than your opponent is more important than ever. Some decks try to get ahead with little tricks to draw a card here or there. The "Critical Mass" deck takes a more direct approach: Just smash your opponent's hand to pieces. Ghost-Lit Stalker and Honden of Night's Reach pack powerful discard effects that will batter your opponent down to zero cards in no time. Meanwhile, "sweeps" make sure that you're holding as many cards as you want. The combination of a full hand for you and an empty hand for your opponent makes for a quick and brutal victory.

Start by playing small, aggressive creatures like Goblin Cohort and Akki Underling. Once your initial assault team is deployed, hammer your opponent with discard spells to prevent him or her from setting up a defense. If you can set up a creature advantage on the board, a Thoughts of Ruin at the perfect moment can strip away all hope—it's hard for anyone to stop your onslaught if they don't have any lands.

Sometimes your opponent will be able to halt your assault after taking some early damage. Many aggressive decks fall apart if their first wave slows down, but you've got a plan. Play a "sweep" card like Barrel Down Sokenzan to boost your hand size back up to seven cards. When you hit that critical mass of cards, your Deathmask Nezumi grow into 4/3 creatures with fear, your Akki Underlings transform into 4/2 creatures with first strike, and your Spiraling Embers do a whopping 7 damage apiece. Sounds like you just broke through.

To improve this deck, try adding quick, powerful attackers like Wicked Akuba from the Champions of Kamigawa set or Raving Oni-Slave from this set. Cheap creature-removal spells like Shock and Rend Flesh can clear out blockers so you can keep the pressure on. A different way to tighten up the deck would be to build an all-red or all-black version, maxing out the power of your "sweeps." The best part of playing the "Critical Mass" deck is pulling off that one glorious turn when you play the perfect Sink into Takenuma, wipe out your opponent's hand entirely, pump up your creatures thanks to your newly full hand, and bash in for what seems like a thousand damage. 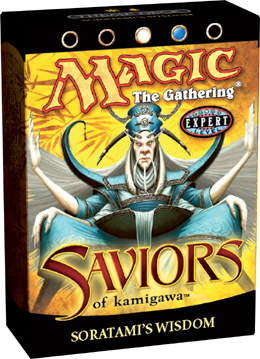 o you think you're smarter than your opponent? If you're playing the "Soratami's Wisdom" deck, you probably are! This deck focuses on two things: creatures and spells that get better the more cards you have in your hand, and spells and abilities that fill your hand with cards. Fueled by the massive brainpower of a giant grip of cards, your fleet of fliers and arsenal of combat tricks will let you outsmart anyone who challenges you.

The "Soratami's Wisdom" deck excels at defense. Oboro Envoy, Kitsune Loreweaver, and Cowed by Wisdom are just a few of the cards in the deck that make it very difficult for your opponent to mount an attack. Even better, all of them share the same trait: The more cards you're holding, the more difficult your opponent will find it to break through. Once you're safe, let loose with your flying creatures, from the graceful Moonfolk to the potentially gigantic Soramaro, First to Dream. Your opponent will find that the same cards that made attacking impossible make blocking just as hard.

But wait—once you play all those cards, won't your hand be empty? Nope. The Moonfolk all have abilities that cause you to return your lands to your hand. That may be a drawback most of the time, but in this deck, it just helps you out. Charge Across the Araba lets you bounce a ton of Plains at once and Cage of Hands can jump up off the table if needed. There are even some card-drawing spells. And just for good measure, Graceful Adept changes your maximum hand size from seven . . . to infinity.

The Kamigawa block is filled with interesting Moonfolk that might have a home in this deck. Since all of their abilities return lands to your hand, you can experiment with different mixes to see which you like best. More card drawing never hurts, and it helps this deck more than most, so cards like Concentrate or Howling Mine from the Eighth Edition core set could fit right in. If you're finding that creatures, artifacts, and lands with activated abilities are giving you trouble, then Mystic Restraints from the Champions of Kamigawa set or Pithing Needle might be the answer you need. Whether you're a wise guy or a smart aleck, your opponents are about to be taken to school. 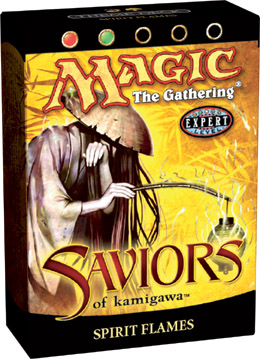 he creatures in the "Spirit Flames" deck are combat specialists. They want to beat your opponent to a pulp. They like it. And this deck gives you the tools to make their job easier.

Since the "Spirit Flames" deck wins by relentlessly smashing your opponent in the face with big Spirits, you'll want to get some creatures into play quickly. If your opponent starts hampering your plans by playing pesky blockers, that's when the real fun begins. Most of the non-creature spells in the deck, like Kodama's Might, Unchecked Growth, Strength of Cedars, and Inner Calm, Outer Strength, give your creatures significant power and toughness boosts. Hold back on these spells until your opponent blocks, then give your blocked creatures some extra muscle to punish your opponent for even thinking about getting in your way. If you lose a few creatures in combat, don't worry too much. This deck features twelve creatures with soulshift, so it's not too hard to return Spirits from your graveyard to your hand.

This deck takes full advantage of the new channel ability. Creatures such as Ghost-Lit Raider and Shinen of Life's Roar have game-changing channel abilities while in your hand, and they act as masters of combat trickery while in play—so you're happy either way! The two big guns in the deck are Arashi, the Sky Asunder and Jiwari, the Earth Aflame. These legendary powerhouses cause havoc once they hit the table as they shoot down your opponent's creatures one by one. But you don't need to play them for them to be devastating! Under attack from a squadron of annoying flyers? Use Arashi's channel ability to empty the skies. That ground-based army looking too big for you to handle? Try Jiwari's channel ability—it'll wipe out everything on the ground. If you want to get either of these legendary Spirits back from your graveyard, Promised Kannushi's soulshift ability can do that so the destruction can continue.

Once you've played with the deck, you may want to add more Ghost-Lit Raiders and Ghost-Lit Nourisher. Extra Kodama's Mights, Unchecked Growths, and Glacial Rays are also good candidates for inclusion since they give you more combat tricks. If you want bigger, beefier creatures, consider Iname, Life Aspect or Jugan, the Rising Star, both from the Champions of Kamigawa set. They like beating your opponent to a pulp too. 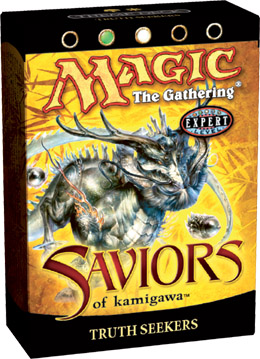 ith the "Truth Seekers" deck you'll be loving life—it's packed with spells and abilities that'll raise your life total to the skies. The rest of the deck is filled with Spirits, and they have some nifty tricks up their sleeves. Many have "spiritcraft" abilities, which means they give you a benefit whenever you play another Spirit or Arcane spell. With this deck, that won't be hard. The real cleverness begins when you start returning your own Spirits to your hand so you can play them again for more "spiritcraft" goodies!

Eiganjo Free-Riders makes you return one of your white creatures to your hand each turn—in this deck, that's a good thing. Pick up one of your Spirits and play it again to have Briarknit Kami put a +1/+1 counter on a creature and let Elder Pine of Jukai fetch extra lands. Even craftier is Haru-Onna. Its "spiritcraft" ability bounces itself back to your hand, where it's ready to be popped back out—each time you play it, you draw a card! It's best to take advantage of Haru-Onna's jumpy nature when your opponent tries to destroy it or just before it would die to combat damage.

Although you can't ignore your opponent's early efforts to take chunks out of your life total, your best plan is to stall. There's enough life gain in the deck from creatures like Ghost-Lit Redeemer to recover from damage you suffer early in the game, and once you start pulling off your Spirit-juggling act and playing spells like Dosan's Oldest Chant, your life total should start climbing instead of falling. If you can get up to 30 life with Rune-Tail, Kitsune Ascendant in play, the legendary Fox Monk will transcend into Rune-Tail's Essence, an enchantment that shields your creatures from all future damage! When your 1/1 Spirits can fearlessly block 10/10 creatures, your opponent doesn't have many options left.

To improve this deck, try adding more powerful Spirits, more exciting Arcane spells, or cards that help out both. For example, the Champions of Kamigawa set offers Yosei, the Morning Star and Long-Forgotten Gohei, while you can find Shining Shoal and Faithful Squire in the Betrayers of Kamigawa set. Why take damage ever again?