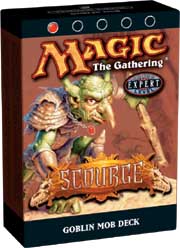 elcome to the wonderful world of Goblins. This deck is definitely not about the long game-it's about playing creatures quickly and attacking with them. With over twenty creatures that cost three mana or less, you should be able to get out a horde of the little monsters before your opponent has much of a defense set up.

But if Goblins have a weakness, it's their lack of toughness. If you find yourself wanting to block, resist the urge! Instead, press the attack and continue to "go aggro." If your opponent manages to get out an effective blocker early, do everything you can to get it out of the way. Blow it up, or go ahead and slam your Goblins right into it! If you can force your opponent to trade a creature for one of yours, great! If not, just try to get your licks in early.

What happens if you just can't get through for damage? "Goblin Mob" has a few midgame tools to help pull you out of a jam. Goblin Sky Raider can fly over enemy defenders and slowly pick apart your opponent. If you need just one last all-out attack, Wave of Indifference immobilizes your opponent's blockers. And a big Enrage is always a good finisher.

Your best bet for clearing a path, however, is to play Siege-Gang Commander. Not only does the Commander bring three Goblin buddies with it, its ability lets you sacrifice Goblins to deal damage to anything in sight. If you have enough mana, this guy can deal huge amounts of damage in a hurry. With a Goblin Warchief or Skirk Drill Sergeant on the table, your opponents won't even know what's happening until it's too late.

If you're looking to improve the deck, think about tightening up some of the combos. Include more Siege-Gang Commanders, Warchiefs, and Drill Sergeants. Another possibility is to speed up the deck by taking out some of the Goblins that cost more than two mana and replacing them with less expensive brethren. Finally, feel free to look for Goblins outside the Onslaught block. Two strong contenders are Goblin King and Raging Goblin, both from the Seventh Edition set. 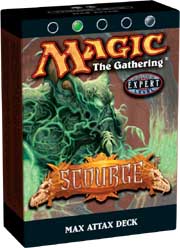 here are some who will tell you that size doesn't matter, but don't let those scrawny little weaklings tell you what to think. The basic goal of the "Max Attax" deck is to pound your opponents into the ground with your big ol' creatures before said opponents get the chance to give you any back talk.

Playing the deck is pretty simple. Most of the cards in the "Max Attax" deck are a little pricey, so playing lands-and Krosan Drovers-is essential to getting your larger creatures into play. Missing even one land play could hurt your chances of winning. Try to stay in the game long enough to get to five or six mana, and then start playing your big Beasts. Once you stabilize, you should be able to win in two or three attacks, especially if you get to play an Accelerated Mutation to pile on 6 or more extra damage.

The deck doesn't have any one- or two-mana creatures, so you won't be doing much early on except trash-talking or maybe cycling an Elvish Aberration or Wirewood Guardian to get an extra forest. When you play your third land, you'll want to play a face-down creature or a Fierce Empath. The Empath serves as a throwaway blocker in addition to finding one of your big creatures. Getting a few creatures into your graveyard early by landcycling or blocking isn't such a bad thing because those cards will fuel your Chill Hauntings later.

To mess with your opponents in the midgame, play Dragon Shadow and Dragon Fangs on your face-down morph creatures or even on a Krosan Drover. If the creature is destroyed, you'll get the enchantments back later when you play a creature that costs six mana or more.

"Max Attax" has a heavy Beast theme, so adding "tribal" cards like Roaring Warchief would give this deck a boost. You could also add more creature-removal spells such as Smother or Swat to help against fast creature decks. If you can just survive the first few turns, you'll thoroughly smash your opponent. Just try not to finish off your opponent with a Fierce Empath-no one deserves that kind of humiliation. 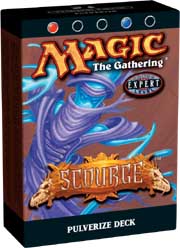 magine you're matched up once again with your nemesis, Fred. When Fred beats you, which seems to be just over half the time, he always gloats for hours afterward. This time, you're hoping to wipe the grin off his face. But it's not looking good. Fred has three 6/6 Beasts in play, and he's been applying the beats to your face for a couple of turns now. He didn't leave any creatures back to block, but he doesn't care. He has 20 life, and you're toast after one more attack. What could you possibly do in one turn? All you have in play are eight mountains and a Goblin Machinist.

The Machinist has 0 power, but you have faith. You draw your card for the turn: a mountain. You play mountain number nine. "Just give up," jeers Fred, "you're done." Not so fast, Fred. You attack with the Goblin Machinist. You pay {2R} to play the Machinist's ability. You reveal cards... Scornful Egotist! That's +8/+0. You play the ability again and reveal more cards... Aven Fateshaper! That's another +7/+0. Once more... Erratic Explosion for another +3/+0. An 18-power Machinist. Not quite enough. Fred wins-by the skin of his teeth. He looks a little nervous. You ask for a rematch.

Before you know it, you're on the brink of losing again to the same giant creatures as last time. Fred's at 16 life, and you're wondering about the existence of miracles. You have no cards in hand, and you've drawn way too many lands this game. You have five islands, four mountains, and two face-down creatures: a Scornful Egotist and a Mischievous Quanar. It looks grim. Once again, you draw what will be your last card.

Torrent of Fire! While Fred's looking away, you decide to feign defeat. You tap five lands and play Torrent of Fire. Then you tap an island and turn Scornful Egotist face up. That's an 8-damage Torrent. "Sure, whatever," says Fred. Now the coup de grace: You tap three more lands to turn the Quanar face up. "Make that two 8-damage Torrents, Fred." It's your turn to gloat. Cruel? Yep. Worth it? Most definitely. 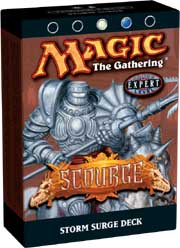 o win with the "Storm Surge" deck, you need to get as much power as you can out of your ten storm cards. With all the cheap creatures and instants in the deck, you can play spells rapidly and then follow them up with a massive storm spell. But for that strategy to work, you must be patient and plan wisely. Always look ahead to see if you can set up a good situation. Don't play your one-mana instants at the first opportunity. Save them instead. Then when you leave yourself open to a big attack, surprise your opponent by playing one or two cheap spells followed by Wing Shards!

Of course, you can't hold on to all of your low-cost spells. "Storm Surge" starts out like any other white-weenie deck. You should play out some quick creature threats and start attacking right away. Many opponents will have bigger creatures in their decks than you have in yours, but your storm tricks and flying creatures will start kicking in about the time those monsters hit the table. Hopefully, you'll deal enough damage in the early game that your opponents won't be able to attack you with bigger creatures for fear of a lethal counterattack.

Even better, if your opponent's potential defenders are only slightly bigger than your creatures, send over your forces and then turn the tables with Astral Steel. Remember that you can choose new targets for the copies of the storm spell if you want to. For example, if you play one spell and then play Astral Steel, you can either give one creature +2/+4 or give two creatures +1/+2.

If you want to customize "Storm Surge," you can cut out the blue cards completely and put in more low-cost white creatures. Another approach would be to play up the blue element by adding more blue "bounce" effects. If you're worried about decks full of smaller creatures, though, bounce spells won't do much good. If your opponents favor fast creature decks, consider swapping the blue cards for a few red direct-damage spells, such as Shock and Volcanic Hammer.