ello again! Thanks once more to Jenna Helland for taking over last week. I'm back today to talk about folklore, but I actually want to refer you to my column two weeks ago during Merfolk Week entitled Merfolk Resurfaced. In it I say that Merfolk will likely see print again in some form in the future, and of course there are merrows in Eventide. But Eventide is witness to a more subtle and intriguing direction of Magic creative, one that I'm very fond of. And it impacts the Merfolk tribe.

A creature type is a powerful flavor-enhancer all by itself. An un-typed green 2/2 is an unimaginative sack of game-mechanical characteristics. But a Bear is a formidable forest mammal with six-inch claws that smell of a sticky-sweet mixture of honey and the blood of its mauled victims. You get a lot of flavor mileage out of assigning a creature type, just from the imagery and associations conjured up by that word sitting there on the card.

Now, I'm not saying that there's no room in Magic for oddballs and one-offs; quite the contrary. There's a special room in the Hall of Creature Type Fame for kooky types like Lammasu and Brushwagg — they carve out interesting space in the flavor continuum just by being solitary weirdoes.

(Note to future civilizations: Hello! Back in our day, there had only been one Lammasu and one Brushwagg printed, leaving aside changelings, Mistform Ultimus, and whatever other weird exceptions you guys've now come up with. That may seem strange to you, what with your settings ruled by the Lammasu Lords and populated entirely with Brushwaggfolk, but we're a primitive people living in the distant mists of Magic's infancy.)

Infrequent, quirky types definitely have their appeal and their merits. But Eventide goes in the other direction, the direction I'm calling reinvesting in creature types. Consider this Shadowmoor card:

A puca (also phooka, pooka, pwca, and other spellings) is a mischievous, shape-changing creature from Celtic folklore. Magic hasn't had any pucas before; we could have simply given Cemetery Puca the type Puca. Instead we decided to print it as Shapeshifter. There aren't many ways in which the creature type Shapeshifter mechanically "matters" right now; Cemetery Puca doesn't gain much in the way of tribal interactions just by being a (non-changeling) Shapeshifter rather than a Puca. But as a Shapeshifter it joins a much more populous tribe that fits nicely into theme decks, and that is more likely to get some tribal love in the future. It draws a familial line to the rest of the Shapeshifter tradition in Magic. And again, that word being there on the card does flavor work — as a Shapeshifter it's better able to communicate a bit more of those Celtic folklore underpinnings. It's a puca. What's a puca? Oh, it's some kind of shape-changer. 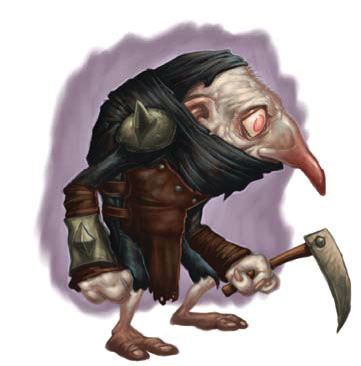 A redcap is a mean little folklore creature that waylays travelers and stains its little hat red with the blood of its victims. In Dave Allsop's awesome illustration, in fact, our Redcap doesn't even have a literal cap up there, but some bloody ick from its last killing spree. (Note: If you are a character in a story of British folklore — and this is very important — DON'T TRAVEL ANYWHERE. Seriously, everything waylays you. Only a few creatures are out there who will fix your shoes — the rest are there to eat you as you're trying to go somewhere. I mean it.) Now, a redcap is not a boggart. It doesn't hang out in boggart warrens or answer to boggart Aunties; it's its own thing. So again, we could have decided that it was a distinct creature type and called it a Creature — Redcap. But instead we reinvested in the Goblin type, which not only gave casual Goblin decks a nice additional monster, but also allowed us to give Lorwyn-Morningtide Boggart decks an additional red-black Goblin even when the rest of the Goblin tribe had moved on to red-green.

Today's preview card is an example of how we used this same strategy. Create creatures from folklore, but interpret them through the lens of established creature types so as to reinvest in those tribally-relevant creature types.

One of these was the selkie.

A selkie is a creature from Scottish, Irish, and Icelandic folklore that lives a dual life. It lives part of its life in the sea as a seal, but it can shed its skin and take human form to dwell on the land. In the stories, sometimes a selkie will steal the heart of a human being, and then break that person's heart when they return to the sea. Sometimes the person will find and steal the selkie's magical sealskin, preventing them from reverting back to seal form and returning to the sea. (If you haven't, watch The Secret of Roan Inish. It's an excellent folk tale about selkies.)

We wanted selkies for the world of Shadowmoor, but there were two issues. One, if we wanted more than one of them in the set, we knew there wouldn't be many opportunities for them to have a transforming mechanic. Many creatures in Celtic and British folklore have shape-changing abilities, and there are only so many power-and-toughness-changing abilities like Cemetery Puca (or Eventide's Crag Puca) that can go into a set. So we knew from the get-go that selkies in Magic would go in a slightly different direction. 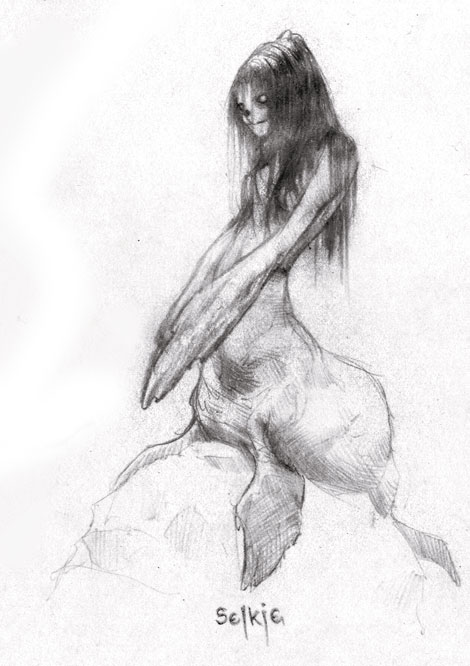 As you can see, it sort of splits the difference between its deceptive human form and its wild seal form (you might even say it's a hybrid of different elements). There are no large seas on Shadowmoor; almost all the water is in a system of rivers and small ponds, so Shadowmoor selkies are river creatures. That made me think that the selkies of this world have a kind of wistful side, a feeling like they belong in the open waters of a grand ocean, but instead they're condemned to slip among the small streams of the plane. 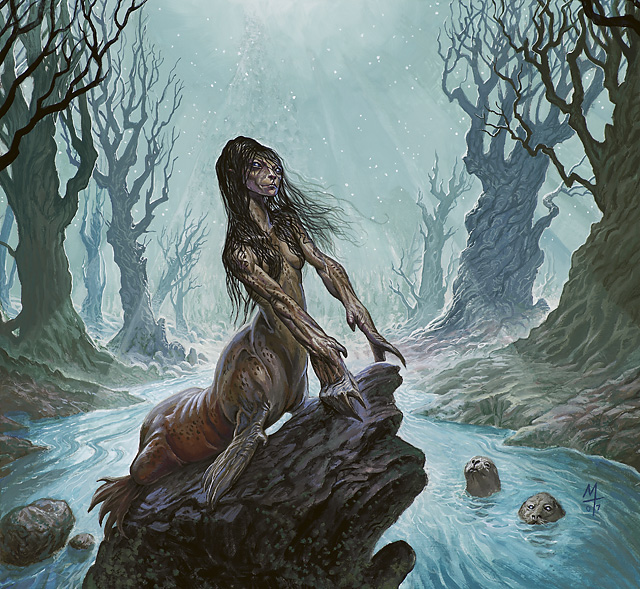 And since this is Shadowmoor, they also have a dark and vindictive side, a side that distrusts land-dwellers and conjures up trickery and watery malice. .

On the face of it, this is a straight-up green-blue hybrid card. It has a "saboteur ability" that is appropriate in both green and blue (lets you draw cards when it hits the opponent) and has an evasion ability which is customary in blue and occasionally occurs as a hoser-ability in green (islandwalk). It has an additional spicy tweak in that it draws not exactly one card, but a number of cards equal to how much damage it deals. Augmenting its power also augments how many cards you'll draw.

If only there were some ways in Magic to make a creature's power larger! Good old Giant Growth makes this into a 4/4 quadruple-Magpie. Loxodon Warhammer makes this thing a 4/1 trampler that will win the game by itself. Diviner's Wand makes Cold-Eyed Selkie into a 2/2 flyer on your turn, and even bigger if you can draw a card or two before attacking.

Cold-Eyed Selkie is also a Rogue. You could go in a kind of islandwalking Rogues route and combine it with equipment like Cloak and Dagger to protect it and pump its power, and Acquitect's Will to power up Cold-Eyed Selkie and your other islandwalking Merfolk. There is also an aura in Eventide that, if it gets put onto a green-blue creature, makes said creature +2/+2 and gives it evasion... I'm just saying.

But as a selkie, this design takes on additional flavor dimensions. Cold-Eyed Selkie is an infiltrator and a thief. It lurks among the river systems of Shadowmoor, angry at being sentenced to the constriction of pools and shallow streams, and sharing the waters with the likes of kelpies, merrows, river horrors and Elementals, and the occasional nucklavee. It finds a tributary that leads to its enemies' back door, and then smashes it in with a found weapon or some strength-enhancing magic in a devastating blitz attack, and then retreats back to the gloomy waters with all the knowledge it will need to conduct its next sortie.

I love that stuff. 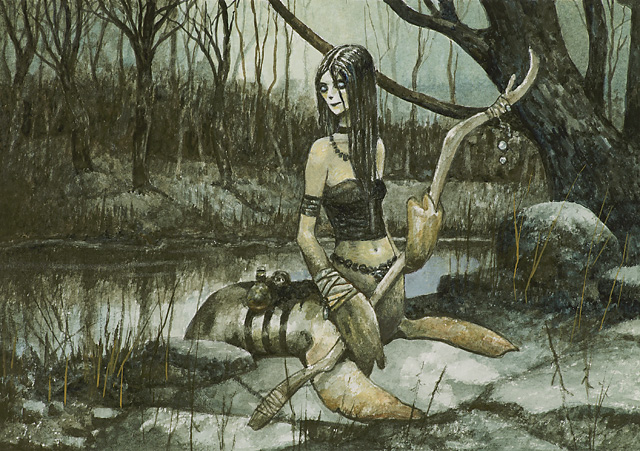 Like Shadowmoor, Eventide is not, itself, a tribal set—it's enemy-color hybrid with color-matters plus a few other surprises. But also like Shadowmoor, it has a lot of the creature types that support the tribal play from the Lorwyn block. A dedicated Selkie type would have been a neat addition to Magic, but as Merfolk, selkies can show off their dual nature in style while both giving them a place in Merfolk decks and enriching the Merfolk tribe as a whole.

Dear Doug Beyer,
Regarding the "Enmities Intertwined" article in the Eventide Minisite:

The "Enmities Intertwined" article mentions various creatures we are (I assume) going to meet in Eventide: trows, hags, selkies, pucas, hobgoblins, kelpies, ghosts, gwyllions. Together with the various new creatures in Shadowmoor, like banshees, Imps, Ouphes, etc. we have seen a lot of different creatures, that weren't seen in Lorwyn.

I was wondering about something. Where do they come from? Where were they in Lorwyn? With some creatures, like the roc and the Dragon it is pretty clear. But the other creatures I am not sure. Did they hide exactly like the rocs and Dragons? Were they always around in some form, but we didn't see them because we were focusing on the eight tribes? Are they some variant or mutation of the tribes we have seen, that in Shadowmoor became a different creature? I hope you can answer me.

Thanks for your question, Roel. The changeover from Lorwyn to Shadowmoor did more than just transform the tribal races of Lorwyn on a 1-to-1 basis. The occasional Ouphe and Imp in Shadowmoor are evidence of this, as you mention, and in Eventide there is far more of this "creepy monsters out of the woodwork" feel. The difference is more a matter of transformation and emphasis than of creation out of nowhere. Like Spinerock Knoll and Knollspine Dragon, certain horrible and malignant elements of the plane go dormant, becoming almost invisible, while the plane is in its Lorwyn state. Many of those creatures of darkness just can't survive the blinding, idyllic glory of 24-hour sunlight, and so they retreat into the nooks and crannies of the plane to wait out the years of the day cycle. When day became night, selkies didn't appear out of nowhere, and changelings didn't wink out of existence — they just move aside and go into hiding while the world doesn't suit their natures.