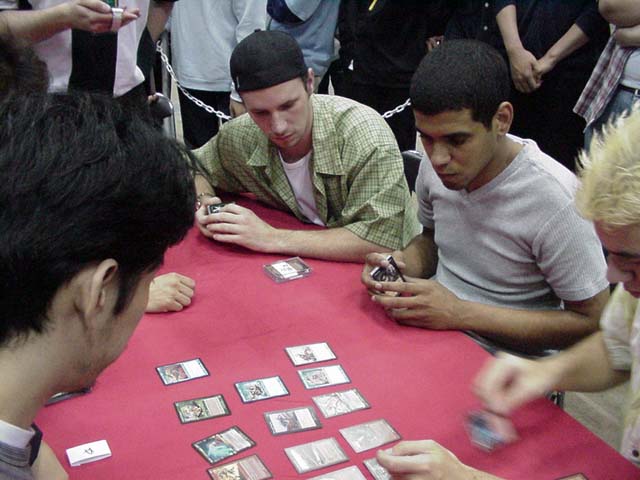 ABU is one of two teams of pro players that traveled to Japan in search of fame, fortune and pro points. They dominated the Swiss portion of the tournament and are now ready for the final matches. ABU won the Team Masters tournament in Tokyo. Substituting for Noah Boeken is David Williams.

Their opponents are Team Fire Beat - a group of very experienced Japanese players. Tsukamoto is a two-time Nationals champion. Nobushita has a series of strong GP finishes, including a 2nd place finish in Nagoya, where his team defeated Williams', and Ikeda Tsuyoshi was on the 2000 Japanese National Team.

Fire Beat is an unusual name. Tsuyoshi owns a store called Fireball, while Tsukamoto also has a store called OffBeat. They combined the two names, allowing both to be featured in a team title. AlphaBetaUnlimited.com is another name intended to promote a business - it is the name of a web site sponsoring team ABU.

Team ABU won the die roll, choosing to open their packs. Early picks were easy for the American players. Williams opened darigaaz the igniter, which he let Benafel take in the corner. Benafel proceeded to open another powerful card in his colors - Shivan Emissary.

The Japanese were not quite as fortunate with their packs. They picked up an Exclude and a Pyre Zombie, but the packs they opened were unspectacular otherwise. Tsukamoto was settling into U/B, Nobushita picking up cards from all over the place but trying to go after green, and Tsuyoshi going after a black-red deck to abuse Pyre Zombie.

Fuller was drafting a green-white deck on the right, sticking to his guns and passing Tsuyoshi a Shivan Emissary to first-pick a Kavu Climber. Not counterdrafting in that situation allowed his teammates to get some viable picks, even if the opposing team got the best card in the pack.

Nobushita solidified his green-white strategy with Noble Panther, while his opponent Williams was picking up solid blue-white cards, splashing black for Probe and potentially some removal spells like Exotic Curse, agonizing demise, or Stormscape Battlemage.

By the time the last Invasion booster was drafted, ABU was at a definite advantage. The packs favored them in addition to the more experienced team having been able to capitalize on several potential mis-picks by their opponents.

Williams seemed to be opening the best packs. His first Planeshift pack featured Waterspout Elemental, Flametongue Kavu (the two cards they took), Silver Drake, Terminate, and lashknife barrier which somehow found its way all the way to Ryan Fuller.

Benafel's pack finally favored the Japanese, as they picked up Ertai, the Corrupted and Voice of All. Benafel took Thunderscape Battlemage. The streak continued as Tsukamoto's pack provided the team with Hunting Drake, tahngarth talruum hero and Mire Kavu. ABY did not complain, as Williams picked up both Marsh Crocodile and Cavern Harpy in this pack. His deck has taken a turn away from white over the course of the later Invasion packs, and he was now blue-black with a potential white splash.

The draft was completed without any copies of Magma Burst - the scariest common in Planeshift - showing up. Although Tsukamoto's team performed well in Planeshift and picked up a number of solid cards, ABU maintained their lead and would likely have a solid advantage in the coming match.