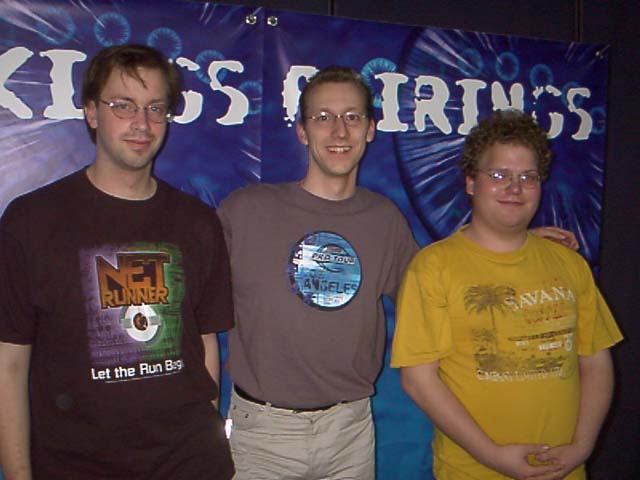 Jos Schreurs opened the first booster and took an Exclude probably following the so popular trend to draft in seat B something like UW or UB and passed a Kavu Runner to Snepvangers; after that, Climber, Phyrexian Slayer and Ancient Kavu respectively to Szigeti, Parker and Clegg and Dolstra getting a wheel of Llanowar Knight and Reviving Vapors. In Pack 2 and 3 Parker took a couple of Probe (he will have 3 in the end) putting him deeply in UB because Szigeti took Armadillo Cloak (over Kavu Chameleon) and Armored Guardian a signal that a sort of UWG combo is his plan. To counteract this strategy Schreurs picked a couple of Vodalian Serpent; Snepvangers a Meteor Shower, showing some RG preferences and Dolstra an Harrow just because Dutch players like them so much.

In pack 4 Parker opened a Rout but he did not pick it just to not shake his manabase too much and not wanting to shift to UWb at that point; the Rout obviously was picked by Schreurs who happily received the gift. After pack 6 this is the situation: Snepvangers GR, Schreurs UW, Menno 4cG (with no Red), Szigeti UW, Parker UB and Clegg RB. Pack 7 gave Parker a gift in form of a Marauding Knight that he picked without hesitation.

This pack also gives to Szigeti the first of his 2 Excludes. In pack 10 Snepvangers opened a Demise and a Kavu Runner and he took the Demise putting him in RGb and denying Parker of a precious spot removal that he was putting his eyes on. Planeshift were just good for the Angsts giving some good RG tools like Thornscape Battlemage, Alpha Kavu and Magma Burst and some monsters like Phelddagrif and Draco to Dolstra. Ah, and a Flametongue to Clegg.

In the end I think that Snepvangers and Szigeti had some advantages and the Parker-Schreurs match-up will decide the match.