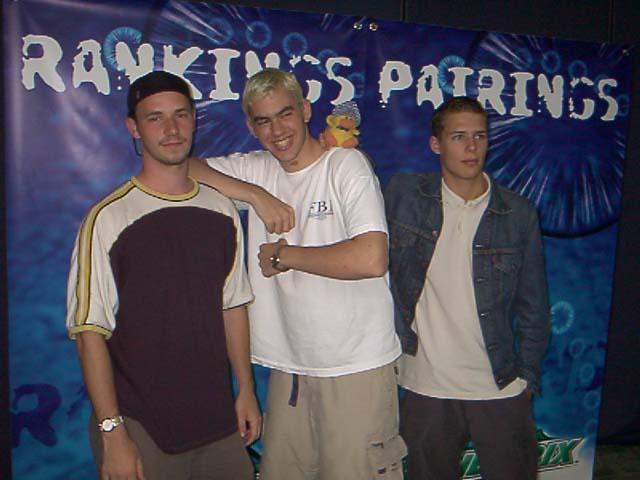 Straight after their hour long battle against Black Ops in the last round of the swiss the Dutch team was hoping to carry some of that momentum into the semifinals. But no Magic team has more momentum than www.alphabetaunlimited.com right now. They are straight out of a Master's victory in Tokyo and a recent victory at Grand Prix Yokohama (albeit with David Williams filling in for Noah Boeken). This weekend they sailed smoothly into the last round, wsere they took the Intentional Draw to get some extra rest.

The drafting was very smooth although the were some discussions, or better yet wild bouts of gesturing, amongst www.alphabetaunlimited.com. They seem to have a pretty established strategy focusing Red-Black on the A seat, Noah Boeken, and Green-Red-White in the C seat, Ryan Fuller. The middle belongs to Chris Benafel who always seems to play some a deck with a Blue-White base.

One Day Fly were a lot less exuberant but seem to waver in their picks with some really awkward picks that might have affected the general power of their decks (including a wasted Tahngarth) although they did seem to follow the same color scheme.

In seat A Noah Boeken plays against Jelger Wiegersma in the battle of Red-Black mirror match. Noah's deck has some gems: Flametongue Kavu and his partner in crime Crypt Angel, Halam Djinn, Pouncing Kavu, Terminate, Scorching Lava, Magma Burst, Cinder Shade and a splash for a single Rushing River.

Again there was a lot of talking in a language I can only assume is Dutch but I can't tell anything about it. Jelger talked in the cell phone a bit about the tournament while Noah talked to all the Dutch in the Top 4... as you can imagine that took a long time.

Noah: "There is no third game, two games is all I need." (Just before taking a mulligan). His second hand was much better and he played a Thunderscape Apprentice on his second turn. Jelger already had a Nightscape Apprentice and they decided to trade.

Boeken's next play was a Skittish Kavu. Unimpressed by that Wiegersma used a Bog Down to cut down Noah's hand. The European Champion trashed around a bit before throwing away two Mountains. Jelger then played a Cinder Shade but Noah was ready with a Terminate.

The Skittish kept swinging and just soon joined by a Hooded Kavu. When his fourth land finally untapped Jelger killed the Hooded Kavu with an Agonizing Demise just as Ryan Fuller won his first game against a mana flooded Tom Van De Logt.

The two armies still largely ignored each other while ripping large chunks of life (leaving the life totals at Noah - 14, Jelger - 10). When Noah sent everyone in, once again, Jelger finally took notice Terminating the Golem and sent a Magma Burst straight at Noah's head.

That seemed to signal the end of game one but when Jelger attacked Noah played a surprise Rushing River bouncing the Bloodstock. That was, however not enough to save him as a Soul Burn dealt the final points of damage.

While shuffling Noah checked on his teammates with Ryan reporting that Tom had somehow got him into a world of trouble on the second game when it seemed well under control. Benafel barely acknowledge his teammate immersed as he was in a big tactical battle. Meanwhile Tom Van De Logt won game two.

Jelger again came out with a Nightscape Apprentice that pecked away before Noah played a rarely seen Turf Wound followed by a much more popular Cinder Shade. His next creatures came out flying: Pouncing Kavu. His hand of five cards was very good, Magma Burst, Crypt Angel, Mourning, Rushing River and Flametongue Kavu, but what he wanted were more swamps. Jelger sacrificed two lands to get rid of the two attackers and played an Urborg Skeleton.

Chris: "Just show him your hand so he can scoop."
Noah: "Jelger played a Skeleton, I guess it is all over for me, right?"

The Crypt Angel leapt on to the table, rescuing the Cinder Shade, while Wiegersma seemed highly apathetic after several turns of playing nothing. The Angel kept coming in and Boeken replayed his Shade. Jelger finally blinked dropping a Phyrexian Bloodstock.

Noah (Before killing it with a Flametongue Kavu): "Your creatures are just so good. So good.". Jelger was in deep trouble but he kept playing blowing the Flametongue with an Exotic Curse. A Skittish Kavu and a Duskwalker joined Noah's waiting army. The only thing moving was the Crypt Angel who had developed a deep love for tapping sideways. 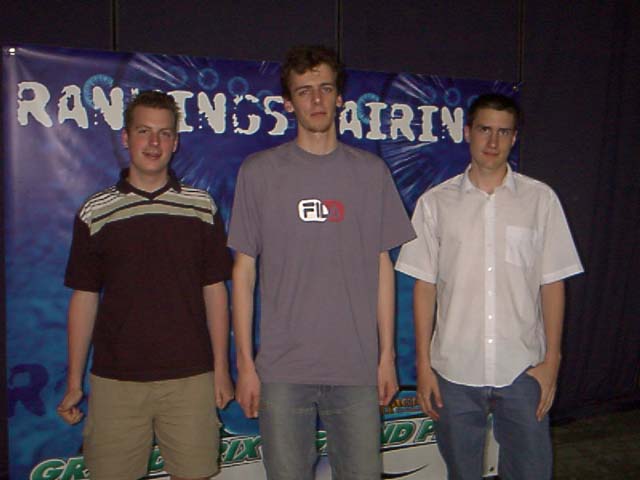 Jelger's pace was now very slow and Noah called in the judge to check the game. With only two cards in hand Wiegersma had to make some tough decisions. He threw a four point Soul Burn at Noah's head before finally passing the turn.

This time Boeken sent the whole crowd in doing eight points of damage, while in the middle table Kamiel finally put an end to a thirty-five minute long game. With a Magma Burst in hand he simply played an extra creature to stop any surprises. There was nothing Jelger Wiegersma could do and he was forced to concede.

Antoine Ruel, one of the several star spectators, handed Noah an extra stuffed animal for extra luck while they shuffled. Despite that Noah had to take a mulligan.

His six-card hand allowed him to play a second turn Thunderscape Familiar, followed by a Hooded Kavu. Jelger once again had to think for a long time while Noah tried to get a cheering section going with his apathetic stuffed animals. Jelger sacrificed his Geothermal Crevice to play a Volcano Imp that could turn into a first striking blocker the following turn.

That plan died under Scorching Lava but he was rewarded with a topdecked Swamp on the following turn. That allowed him to kill the Hooded Kavu with an Exotic Curse but Noah dropped an hasted Kavu Runner to keep the pressure. On his next turn the trouble was even bigger: Halam Djinn.

Wiegersma was not ready to lay down and die and killed the Djinn with an Agonizing Demise. He played a Rogue Kavu as a potential blocker and used a Terminate to kill the Runner. Noah's offense had gone from impressive to laughable in two turns. Jelger played a Kavu Recluse to start swinging.

Boeken peeled a Duskwalker and played it, setting Jelger on a unblockable, for the time being, clock while he tried to urge his teammates on. A Soul Burn killed the Familiar to give Jelger more breathing room and the Duskwalker traded blows with the Rogue Kavu.

Turf Wound again made another appearance netting Noah another card and lapsing Jelger into deep thought. He finally played an Urborg Phantom but that could not stop the Duskwalker. Jelger was finally in Magma Burst range! Noah killed Jelger and was quickly joined in the celebration by Ryan Fuller who had just won his match.

In the middle table Benafel and Cornelissen were now toiling away in a irrelevant game two deep into the extra turns. Despite their best efforts they could not untangle it and it ended in a draw.