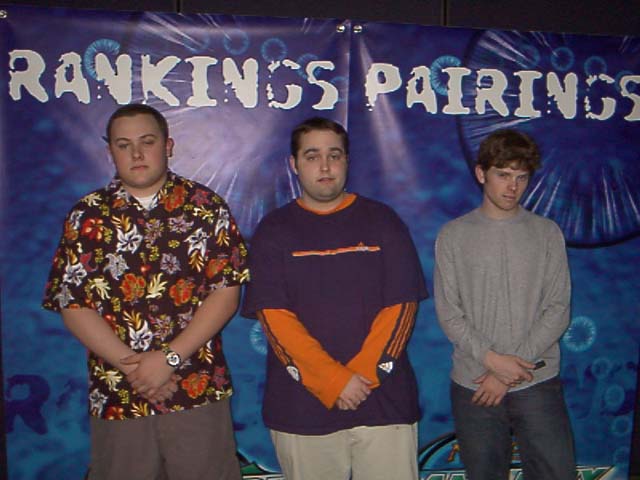 The first game started out slowly with Parker mulliganing. Both players played different 1/1s and it got very interesting when Schreurs played flier after flier after flier. At one point is seemed like Parker could come back with Marauding Knight and Sky Weaver, but the Silver Drake, Aura Griffin, and Tower Drake were too much for the American.

The Second Game was amazing; I never realized how good Parker really is at this Game. He played perfectly turn after turn and won a game that many spectators thought unwinnable. The game started with Parker playing Urborg Phantom and Cavern Harpy and Schreurs playing Sunscape Familiar and Tower Drake. For a few turns, the creatures just stared at each other and when Schreurs played Rainbow Crow with 2 cards in his hand. Parker kicked a Probe. When everyone thought it was over, Schreurs topdecked a Vodalian Serpent. A few turns later Parker kicked another Probe while trying to reestablish control, but Schreurs drew Fact or Fiction. This revealed another Serpent and other goodies; many spectators stopped watching the match. But Parker kept on fighting and at the end he won the game.

Game 3 was a quick beating with Schreurs mana-screwed. Parker kicked three Probes in a row and a few Urborg Phantoms demolished the cardless Dutchman.

The first game was over quite early with both sides playing various beasts. The life totals where going down very fast and when Clegg mana flooded for a few turns, Snepvangers played Meteor Storm to end the game

In Game 2, Snepvangers was mana-light and played Darigaaz's Caldera on turn 2. On Clegg's side, we had a Turn 3 Plague Spitter and a Turn 4 Ancient Kavu. With very low life, Snepvangers kept on fighting by playing Slimy Kavu, Viashino Grappler Magma Burst and Thornscape Battlemage but a topdecked Plague Spores allowed Clegg to deal the last point of damage.

The final game also saw many creatures; the difference this time was Snepvangers's Alpha Kavu, which pretty much dominated the whole game. In the end, Snepvangers topdecked an Explosive Growth to finish the American off.

Dolstra and Szigeti both started off with a mulligan and Dolstra's mana problems continued with his second-turn Riths Grove. In the first few turns, Dolstra played Nomadic Elves and Slingshot Goblin while Szigeti played Tidal Visionary, Samite Pilgrim and Shoreline Raider. Szigeti played Silver Drake the turn after a Hunting Drake was played and not even a very good Fact or Fiction from Dolstra could stop the flying onslaught.

The second game was won by Dolstra very easily because of Marauding Knight and the fact that poor Szigeti drew only five spells to go with his twelve lands. The third and final game was once again decided by mana problems when the poor Dolstra, after a mulligan, lost his only forest to a Benalish Emissary and couldn't do anything but stare at a Silver Drake and another flier.