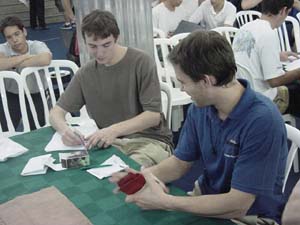 Antoine had to cool down for a good twenty minutes after the long, complicated and often too noisy quarterfinals while Guilherme had a long time to regather his wits after the quick quarterfinals against Argentinean Jose Barbero.

They shuffled up while Leopoldo and Alex were finishing their first game and got ready to decide a slot in the Grand Prix's finals. Antoine seemed especially excited about winning a huge trophy.

Guilherme won the dice roll and Ruel was quite happy not to see a first turn play. Svaldi used a Wasteland on a Tundra and Ruel answered with a Brainstorm that took him a minute to resolve. Tiredness was visible in both faces but Antoine seemed especially exhausted.

Finally Guilherme got a creature in the shape of an elephant token that Antoine ignored while Swording away the Birds. Taking advantage of his opponent's mana problems the Brazilian dropped a Winter Orb and destroyed yet another land with Wasteland.

Through this mana struggle the elephant ruled the imaginary Red Zone all by himself until the French found another Swords. This forced Svaldi to drop another creature and he tried first an evasive River Boa but Ruel Forced it.

Despite the Orb the constant card-drawing spells and a Tithe seemed to be pulling Ruel out of the trouble. He countered a second Boa and dropped a Seal Of Cleansing to get rid of the annoying white bear (Winter Orb).

Svaldi tried to replace it but this time Antoine was more than ready and had a Counterspell for it. He let an elephant in after casting the following Fact Or Fiction.

Taking the second pile. The second Fact Or Fiction gave him Tithe, Brainstorm and Adarkar Wastes. During all this the noise level in the room again climbed steadily.

A Wasteland brought Svaldi down to two lands and with Ruel in amazing card drawing mode - to such as extent that his graveyard towered over his library - the game seemed sealed. Lack of initial pressure meant Guilherme was forced to give Ruel way too much time to catch up.

Guilherme drew two consecutive lands and thus managed to flashback his elephant. Ruel forgot about while casting Fact Or Fiction and Brainstorm and seemed surprise to see the token but he had a Swords in his hand and took care of it.

But the Brazilian liked that play so much, and was still unable to draw any other creatures, so he flashbacked his third Call only to have Ruel use a Wrath to put an end to that nonsense.

Finally Guilherme found a Granger Guildmage and dropped it along with a Phyrexian Furnace. The French got himself a flashbacked Elephant as well before the Furnace could eat its way to it.

Svaldi tried to block it with the Granger, pumping him with Wax/Wane but Ruel used another Swords to take care of that. He tried to repeat the play a turn later and this time Ruel decide he would rather trade and get himself two brand new Dumbos.

They ruled the Red Zone for a couple of turns before Svaldi drew a Mother Of Runes. Despite his table control Ruel needed to end the game fast as his library was precariously low, with little more that ten cards in it.

Guilherme drew a Swords but decided to wait it out, perhaps hoping to catch Ruel with less mana open, after a quick recount of the cards in the graveyard especially the counters.

Sure enough when he was forced to make his move Ruel tapped five mana for a Force Of Will. The Mother was now Svaldi's only hope of surviving the onslaught long enough for Ruel's library - now down to six - to win him the game.

The math was easy: Ruel had six draw phase, and thus six combat phases and Svaldi had eleven life points. The resource that would last longer would win the game. With the game seemingly in his grasp Ruel used a Gaea's Blessing to destroy that plan. His Blessings, against a counterless deck, would ensure him the win.

There was no way out for the Brazilian and when Ruel finally played another permanent that was crystal clear: Morphling. A brave Bird, with the Mother helping him out, constantly blocked the Blue Wonder but the Elephant finished the job it hard started more than ten turns before.

They sideboarded in the midst of a solid wall of noise, some of it coming from people trying to get the noise level below "giant airplane landing in your backyard" level.

Svaldi seemed slightly excited, by his droopy standards, about his initial. While devoid of creatures he had two Pyroblasts and Winter Orb. They both kept it and went through the motions of their first turns with Ruel trying to build up his mana while Guilherme had fun with Rishadan Port.

When he played his Orb Antoine let it through despite having Force Of Will. With the Orb and the Port Svaldi now had some control over Ruel's available mana, while still having some mana open with his Birds.

The French was waiting for its fifth land, since one was forever locked by the Port to drop a Disk. That would destroy the setup and give him back control of his mana, and the table. Svaldi found a second Port but Ruel took his advantage away by Swording the Birds.

Still the land refused to show up, much to Antoine's chagrin. Guilherme tried to play yet another piece of the puzzle in the shape of a Quirion Ranger but this time around Ruel had no qualms in immediately Forcing it.

If he couldn't drop the Disk Ruel found a way out in the shape of a Powder Keg. While they played mana games the Keg grew until it was ready to blow the Orb. Then Guilherme made his move: Call Of The Herd. 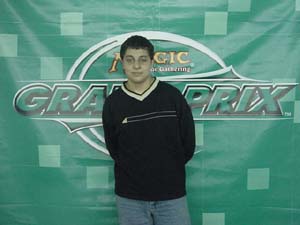 The elephant entered play since Ruel was at a very high life total: nineteen. Instead he dropped his Disk but Guilherme was ready for that with a Seal Of Cleansing. The two Ports where working hard to pin Ruel's mana down but he still had enough to drop a second Keg.

He took yet another two hits from the elephant falling to six before finally blowing the Keg. Guilherme tried to flashback the Call but Ruel countered it. That would have solved the problem if Svaldi didn't have another Call in his hand. The elephant beats were back and threatening to finish the game.

But the French still had some Magic left and he topdecked a Swords to stop yet another elephant. Yet the Brazilian was persistent in his mana denial plans and with the help of a Wasteland found an opening to drop a River Boa. Yet again Ruel found a Swords waiting for him.

If those two Swords had given him more time the next flashback elephant was too much for his low life total and he conceded.

The heat in the site was now like a constant sandstorm that only seemed to heighten the noise of the crowd. The players watching the match were actually pretty quiet but the players milling around were pretty rowdy. Sadly the table judge could not help with that matter since he had just suffered a little embarrassing accident: his pants were torn and he couldn't get up without making a spectacle out of himself. Only in Brasil, I tell you.

Meanwhile Antoine and Guilherme actually got their game underway with Svaldi initial Furnace eating away Ruel's graveyard and Antoine swording a Birds. Still the Brazilian could muster much of an early pressure so Ruel went into Fact Or Fiction mode.

Pile one: Wrath Of God, Call Of The Herd.
Pile two: Counterspell, Wasteland and Powder Keg.

The French took the second pile and dropped the Keg. Svaldi took the chance to blow up one of his two untapped lands to drop a Seal. With it he blew the Keg saving his Mother and the Furnace. The Furnace didn't last a lot longer because Antoine had a Seal of his own.

On the next turn Guilherme played a Winter Orb and again mana became a priceless resource with every spell counting even more. Ruel tried to get ahead of the race with a Sword on the Mother and a Dumbo but Guilherme paid him back in the same way by Swording the token.

The Brazilian got a elephant and Ruel had to shake his head. Things were not going completely his way but he wasn't afraid to use a Wrath. The elephant flashbacked into play on the following turn and the French had to solve the problem again. This time he decided he might as well follow the lead and stop the elephant with another elephant.

Svaldi tried to play a Granger to break that stalemate but Ruel Forced it. Svaldi couldn't pressure anymore and was forced to back down. With the elephants staring at each other Ruel slowly untapped his lands and rebuilt his broken down hand. The advantage was now his. Dumbo shines in the long games and if he could get rid of the Orb he could play the two
Fact Or Fictions he was holding.

Svaldi launched a Armageddon, protecting it with Pyroblast and Ruel was forced to empty his hand to keep his lands. He was now at the mercy of the top of his deck. The deck was obviously his friend when he drew and slammed down a Seal Of Cleansing. He now had a tough decision: unlocking his lands or stopping the Furnace from removing his business spells from the graveyard.

He didn't have to think long because Svaldi blew the Furnace to draw and extra card and get rid of any incoming elephants. Svaldi found another Armageddon and when Ruel tried to cast Fact Or Fiction in response he was ready with a Pyroblast.

With a tired smile Antoine extended his hand and conceded the round.