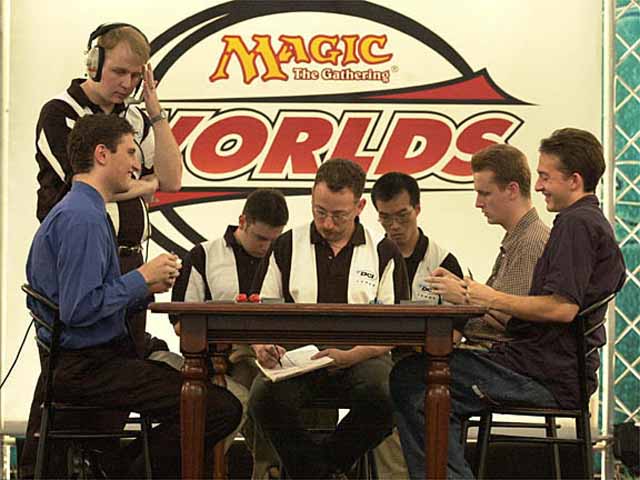 Jon Finkel (USA) met Benedikt Klauser (Austria) in the semi-final. Could Klauser stop the mighty Finkeltron machine? The Austrian was at clear disadvantage in the match-up as the Tinker deck Finkel played was designed to beat the Trinity green style decks prevalent in the field. Both decks had the potential for explosive starts but the green deck lacked the sheer brute power of the artifacts.

It was apparent early on that both players had very strong hands. Finkel cast first Voltaic key then Monolith, using it to bring out a Metal Worker. Klauser replied with Birds of Paradise and then Rofellos. Had he been going first the game might have been quite different but as it was next turn Finkel set the droid to work and revealed two artifacts that would have caused the Austrian's heart to sink - Masticore and Processor. Finkel dropped the Masticore and both bird and elf were clinically gunned down. Klauser brought out more and they went the same way as the Masticore roared in for 4. The key whipped the Metalworker into double time and made a Processor, paying 8 life. The Finkeltronic Factory was up and ready to rumble. In the next turn he activated the Metalworker before he discarded another metalworker to give him extra mana in his upkeep to clank out an 8/8 monster. Klauser cast a Deranged hermit to give some Rodent Fodder to the Masticore and stave off the inevitable. For safety Finkel tinkered with the Monolith and turned it into a dynamo. Maybe with an insane hand Klauser could have possibly dropped hermit, cradle and then a second hermit. Instead he had just one Priest of Titania. Praying didn't help as the token and Masticore smashed through

Finkel decided his deck was good enough and neglected not to use his sideboard. Klauser brought in orangutans, splinters, processors, a worldly tutor and an extra forest to give the deck a little more consistency. 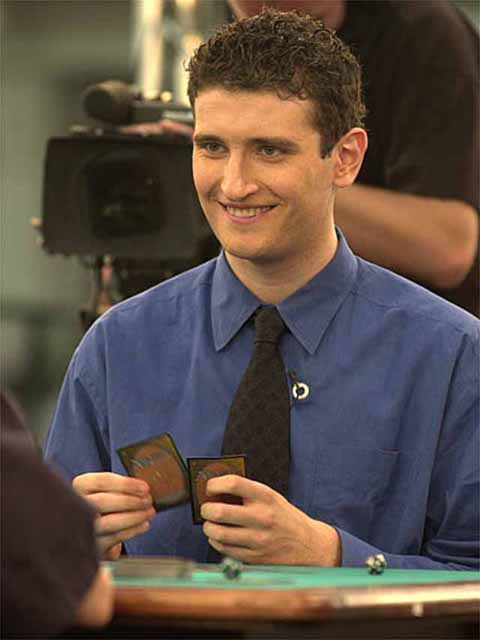 It soon became apparent Klauser didn't have an amazing hand as he laid birds, then a Treetop Village and then did nothing with 3 mana. Finkel's third turn was again insane. Monolith, dynamo and then a second key allowed him to cast Tangle Wire and then Metalworker. The Finkeltronic factory was ready to go. It didn't seem as though he had any threats to go with it and even attacked with the metalworker. The factory was thrumming but seemingly without any orders. Then the droid got into gear and generated 2 mana, revealing Processor! The assembly line kicked into overdrive and pumped out two 10/10 monsters. Smack!!

Klauser got Rofellos into play early and then a priest, turning machinery against itself with a Tangle Wire of his own. Finkel had a monolith and was able to float 4 mana and untap the monolith once tanglewire resolved, giving him enough mana to bring out another dynamo. Now it was difficult to see who the Tangle Wire was hurting the most. Klauser dropped a cradle to give him plenty of mana but nothing to use it on so the elves and a village went on the offensive. The Finkeltronic factory spat out a massive 8/8 colossus to discourage further insurrection. So out swung an orangutan to smash it to pieces. The droids couldn't put up enough resistance and the factory was soon overrun by elves. Nature had its revenge. 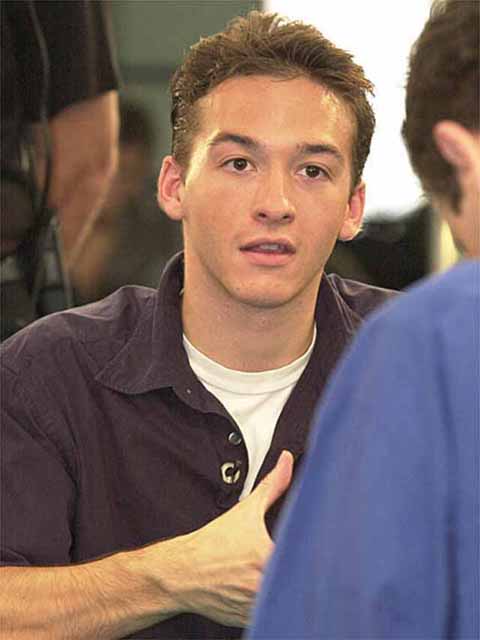 This game saw a slower start with Finkel not making an artifact until turn 3. Had the Finkeltronic factory broken down? Klauser meanwhile got a bird and then tanglewire on the table. Klauser stopped to think with a hand that had too much land. He chose to bring out a Priest of Titania. The factory started to assemble itself with dynamo, dynamo and then a Tangle Wire to tie everything up. As they struggled through the obstacle course Klauser brought more elves out of the woods but no major threat. The factory purred into action and Finkel used a second key to make a processor, spit out a 10/10 and drop a second tanglewire. "Come on," Klauser said, not believing Finkel's draw. With 3 Tangle Wire on the table almost all the board is tied up and now Klauser cannot cast the splinter in his hand. In upkeep Finkel added another token, which he can then tap for the wire. With enough mana Klauser splintered the processor out of commission, but not before Finkel made another 10/10 in response. Finkel was smiling when he had to reveal his hand and show a masticore to the luckless Austrian. That hit the field and gunned down the elves, clearing a path for 3 10/10's to smash through. Resistance is futile. We are Finkeltron.

Finkel wins 3-1 and goes on to the finals to play Bob Maher Jr.