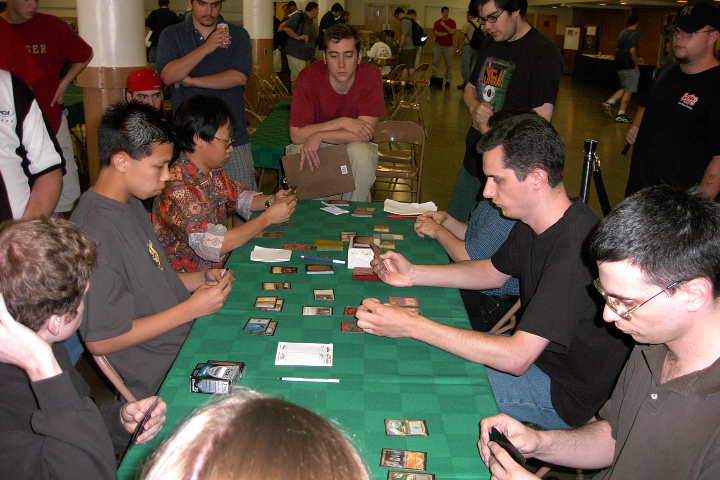 In this semifinal match, The Ken Ho All-Stars, comprised of Dan Clegg and Ken Ho from San Francisco and Lan D. Ho from Texas, were paired up against The Ancient Kavus, consisting of Matt Vienneau and Gary Krakower from Canada and Mike Pustilnik from New York City. The Ken Ho All-Stars were in first place after the swiss rounds with an undefeated record of 8-0-2, while their opponents made it in at fourth place with an 8-1-1 record. Matt Vienneau and Mike Pustilnik were both having an outstanding season, with Matt having won two Grand Prix events and Mike having won Pro Tour - Los Angeles, in striking distance of Player of the Year.

The draft had few surprises; each player's draft decks were shaped by their initial picks and there was little need to stray from their color combinations as the draft progressed. The Ancient Kavus opened first, with Matt Vienneau opening the very first Invasion pack. That pack treated him quite well, giving him a Spite/Malice, an Aggressive Urge, and a Yavimaya Barbarian. Matt then went on to draft an aggressive Red/Green deck with a splash of black, picking up some powerful cards like Magma Burst from Planeshift, Fire/Ice, Consume Strength, and Life/Death from Apocalypse, as well as a solid creature base. His opponent, Ken Ho, drafted a Shackles and a Tidal Visionary out of the first pack, and continued on the Blue/White path until he was able to pick up a Planar Despair. In the end, Ken had a deck that was short on victory conditions, but with the potentially broken combo of three Shackles and a Planar Despair, as well as two Coalition Honor Guards and a Prison Barricade that could live through the -3/-3 that the spell would end up giving.

Mike Pustilnik, sitting to Matt Vienneau's left, began by taking Wash Out from the first pack, Fact or Fiction from the second pack, and then a wheel of Rainbow Crow and Glimmering Angel from the third pack. He stuck to Blue/White until Apocalypse rolled around, where he chose to pick up Red for a Goblin Legionnaire, Flowstone Charger, Razorfin Hunter, Squee's Embrace and a Quicksilver Dagger. When all was said and done, he had a number of quality fliers including three Living Airships, but he was unhappy with his deck and his matchup. Lan D. Ho, his opponent, took an Exotic Curse and a Fertile Ground of the first pack and a Plague Spores out of the second pack, putting him solidly in Red/Green/Black. Lan was gifted with many powerful cards, most of which he opened or was forced to take to keep them out of the hands of the opposing team, including Tahngarth, Talruum Hero, Spiritmonger, Death Grasp, and Illuminate. 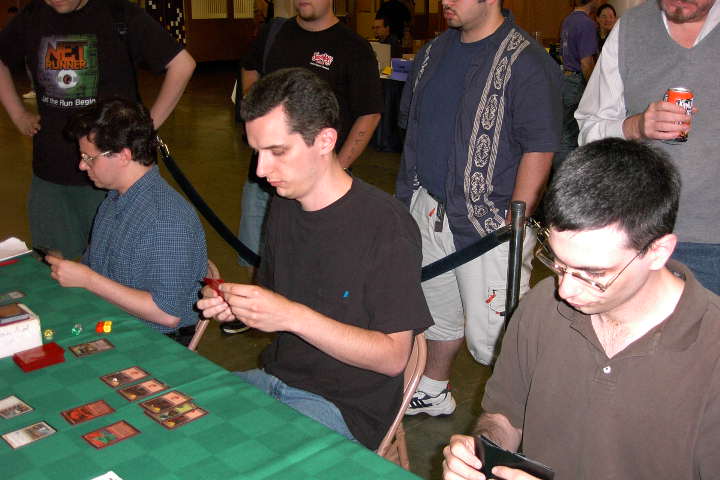 Gary Krakower, meanwhile, sitting on Vienneau's right, didn't have the best draft. He began with Hate Weaver and Crimson Acolyte, strayed into Blue in the fourth pack with a Dream Thrush, and ended up playing Black/White/Blue with his primary non-Black spells being Sunscape Battlemage and Cavern Harpy. His creature base was only mediocre and he was forced to play multiple Phyrexian Bloodstocks and Morgue Toads. Dan Clegg fared much better in the draft, however. He drafted an Ancient Kavu, a Kavu Monarch, and a Phyrexian Battleflies out of the first two packs and only strayed from Black/Red to take two Rushing Rivers in Planeshift. In the end, Dan had a good creature base and enough removal and tricks with Magma Burst, Plague Spores, two Rushing Rivers and an Order/Chaos to build a solid deck.

Upon examining the decks and matchups, it seemed that The Ken Ho All-Stars were the favorites, with Dan Clegg and Lan D. Ho expected to win their matchups while Ken Ho was expected to lose to Matt Vienneau.

Two of the three matches were over quite quickly. As per the predictions, Dan Clegg made short work of Gary Krakower, helped along by poor draws on the part of Gary. Gary Krakower managed to win one game with a Coastal Drake to thwart Dan Clegg's Kavu and a Foul Presence to deal with the rest of the creatures, but in the third and final game, Dan Clegg went to town with a Phyrexian Battleflies enchanted with a Sinister Strength and won the match. Mike Pustilnik, on the other hand, managed an upset against Lan D. Ho despite Lan's extremely powerful cards. Pustilnik won in two games, using a Razorfin Hunter to cripple Lan's early game in game one and come over with a Squee's Embraced Living Airship and racing again with fliers in the second game with the help of Wash Out.

This left it all up to the match between Matt Vienneau and Ken Ho, a matchup that seemed to be in Vienneau's favor. While Ken had plenty of groundstall in the form of Coalition Honor Guards, Prison Barricade, Metathran Zombie, and Samite Pilgrims, it was unclear whether he'd be able to actually win the game. For evasion creatures, he had only Stormscape Familiar, Dream Thrush, Whirlpool Drake, and a splashed Duskwalker, the only one who didn't die to Vienneau's two Slingshot Goblins. In addition, a Strength of Unity could be used to create a second creature with power greater than two, but it was going to be tough going. In the first game, Ken Ho stalled the ground with two 2/4 creatures until he was able to cast Planar Despair to clear Vienneau's side of the board. Ken Ho followed that up with a Duskwalker, a Whirlpool Drake that was killed with Spite/Malice, and a Strength of Unity on a Metathran Zombie for the kill. 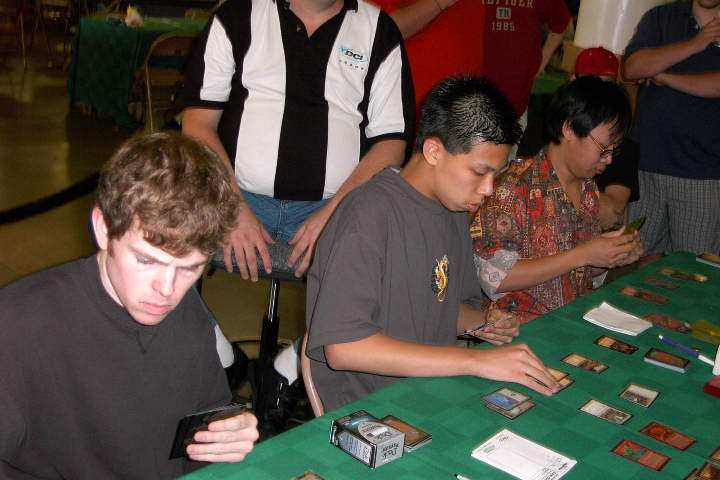 Game 2 progressed in a similar fashion, with a creature stall early on and a Whirlpool Drake who rushed to his death at the hands of a Slingshot Goblin to give Ken Ho a new hand. It turned out to be quite a hand, however, giving Ken his Planar Despair, which could clear the board of everything but his Prison Barricade, as well as a Coalition Honor Guard and an Urborg Emissary. Shortly after casting the Planar Despair and beginning to cast the remaining creatures from his hand, Ken Ho drew Duskwalker, which he was able to get into play before Matt Vienneau made him discard the rest of his hand with the Thunderscape Battlemage. Ken's hope that the Duskwalker would go all the way were crushed by Matt Vienneau's Magma Burst (targeting an Honor Guard and the Duskwalker) and Matt was able to get enough creatures out to stall the ground once again. Matt Vienneau soon drew a Zombie Boa, an evasion creature of sorts that would put a great deal of pressure on Ken. Unfortunately for him, Ken drew a Shackles to deal with that and a Strength of Unity to make his Prison Barricade an even bigger blocker and the creature stall was on once again. Matt Vienneau top decked Life/Death and the spectators believed that was the beginning of the end for Ken Ho.

Ken wasn't low enough for Vienneau to cast Life and swarm him with his 1/1 lands, but he was able to use Death to bring Sparkcaster back from the graveyard. At this point, Matt Vienneau had two choices, use Sparkcaster to recursively deal two points of damage every turn until Ken was dead or bounce the Thunderscape Battlemage and blow up the Shackles on the Zombie Boa (either using it the turn he cast Death while Ken was tapped out of white or paying both kickers on the following turn) and use the Zombie Boa to race to victory, double blocking the giant Prison Barricade or chump blocking it as necessary. Instead, Matt chose to destroy the Strength of Unity on the Prison Barricade, which only prolonged the creature stalemate. Eventually, Matt was able to build up enough creatures to attempt to rush Ken Ho, but Ken had a Pollen Remedy ready for such a situation and it ended up being quite disastrous for Matt, leaving him open to a counterattack that got him low enough for Dream Thrush to finish him off.