A Series of Rarely Good Events

, folks. It's summertime in my neck of the woods, which apparently means one thing: rain. For the past few weeks, Toronto has been gloomier than Lorwyn after the Aurora. Or is it before the Aurora? In any case, the sunny, storybook world I usually live in has turned into a dark and dreary place like Shadowmoor or Seattle.

Since I'm not exactly in a chipper mood because of the weather, I thought I would be mean and take my frustrations out on fantasy-themed game pieces by declaring that some of them, some of the rare ones, are complete rejects. Shadowmoor has been in the public sphere for long enough that I feel comfortable doing so. But because I'm not actually that mean, I'm going to use these cards in (hopefully) fun decks so that they may realize their true potential as pieces of cardboard. First I tear them down, then I build them back up. It'll be like What Not to Wear, but for Giant Shamans. Shall we?

I guess I'll start things off with Valleymaker. It's a red-green hybrid that requires the use of both Mountains and Forests to maximize. For the cost of one Mountain, you get to Lightning Bolt a creature. For the cost of one Forest, you get to add three green mana to target player's mana pool. The neat part about this set of abilities is that because Magic has a little feature called "mana burn," the second ability is a sneaky way to effectively deal three "damage" to an opponent. It's got all of the elegance with none of the embedded links. So you've got the capacity to fire off either half of a Lightning Bolt, plus you've got the ability of an Orcish Lumberjack in a 5/5 body. It seems like it has potential.

When you're using a mana accelerator that costs six, you're going to need a lot of mana to start with, as well as some ways to use all of that mana. With respect to the latter, I think some X spells will do (like Disintegrate and Squall Line), while the former can be handled by Wall of Roots, Search for Tomorrow, and, most importantly, by Rites of Flourishing. The reason I want to use the Rites is because of how well it fits in with the Valleymaker / Crucible of Worlds / Countryside Crusher triad. Your Valleymakers eat up your lands, which pumps up your Crushers. Your Crushers dump lands into the graveyard, which Crucible allows you to replay. With Rites, you can replay multiple lands per turn, which is nice with Countryside Crusher, but also handy if you want to machine-gun a bunch of creatures with your Valleymakers. While Valleymaker can usually only be used once per turn, there are ways around this. I briefly considered Umbral Mantle and Thousand-Year Elixir before going with Thornbite Staff (Valleymaker is a Shaman). Not only can you destroy a number of three-toughness creatures equal to the number of Mountains you control, but you can also add tons of mana to your mana pool if the Forest you sacrifice is a Dryad Arbor. Of course, you will need both Rites and Crucible to do this since there's only one Dryad Arbor in the deck and you will need to replay it to do this more than once, but I hope you can see the potential there.

Obviously, there are other ways to go. One thing I didn't try was to focus on Valleymaker as a mana-burner. There are enough cards that add mana to your opponent's mana pool to make possible a deck whose sole aim is kill him or her with mana burn. Eladamri's Vineyard, Magus of the Vineyard, and Spectral Searchlight all come to mind. Mana Flare, Heartbeat of Spring, and Overabundance usually result in unusable mana. With a card like Dosan the Falling Leaf or City of Solitude on the table, you could activate your Valleymakers and Spectral Searchlights during your turn to limit your opponent's options. And there's always the Upwelling rope-a-dope.

This deck sprang from my desire to flop Wound Reflection on to the board from under a Spinerock Knoll. It's hard to think of better situations to play Wound Reflection, since you will have to have dealt at least 7 damage to your opponent before activating your Knoll in the first place. If Wound Reflection sticks around until end of turn, that's a loss of at least 14 life for your opponent.

Once I got to this point, I looked around for other easy ways to deal 7 damage. Attacking with 7-power creatures always seems exciting. I was going to use Grapeshot and Pyromancer's Swath, but those are the kinds of cards people use in Dragon theme decks. Instead, I opted for another Shadowmoor rare that hasn't gotten much press: Cragganwick Cremator. It's like a cross between Balduvian Horde and an erratic Goretusk Firebeast. When it comes into play, you have to discard a card at random, and if it's a creature card, you get to deal damage equal to that creature's power to an opponent. Since I wanted to include a bunch of high-powered creatures anyway, this seemed like a great option.

There are more powerful creatures than the ones I used, but I wanted to keep things simple and two colours. Nova Chaser and Greater Gargadon will deal the most damage when discarded, while Knollspine Dragon will deal just enough to activate its former home. Flamekin Harbinger, Shriekmaw, and Spitebellows keep the creature density high (while acting as spells), ensuring that you will rarely whiff with your Cremators. Here's where I ended up:

To the Ice Cave!

When it comes to cracking open booster packs, everyone's got some hard-luck stories. While I am still Garruk-less after opening multiple boxes of Lorwyn, that is not the baddest beat I've been given by an expansion. No, that right is reserved for Apocalypse. Populated by many spicy rares such as Pernicious Deed, Vindicate, and Mystic Snake, the third set in the Invasion block also had the two cards that I most desired at the time: Spiritmonger and Desolation Angel. I don't know how many packs I actually opened (in retrospect, it probably wasn't that many), but as the empty cellophane wrappers piled up, my stockpile of Spiritmongers did not. I had more Vodalian Mystics than a human being could possibly need (i.e., more than zero) and, for rares, I was slowly amassing enough Symbiotic Deployments that I could safely skip my draw step from now until the end of time (or until someone killed all of my Saprolings). 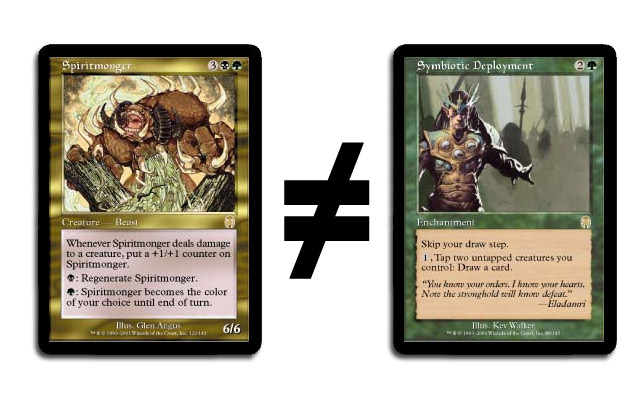 The worst was yet to come.

My friends and I get together periodically for weekends packed with gaming. Once everything has been cleared with various bosses and missuses, we meet at an undisclosed location and spend many consecutive hours drafting, playing various multiplayer formats, trying to get the longest road, and assassinating the architect. We generally keep stats and award the winner some small prize. At one event, we had a bunch of random boosters up for grabs, from Homelands to Odyssey. The winner got to pick two packs and the ultimate loser hoped to open a Merchant Scroll. I won the event playing some wacky deck I made up, full of Wild Mongrels and Basking Rootwallas, so when it came time to draft the packs, I naturally chose the two packs of Apocalypse. With dreams of 6/6s for five, I busted open both boosters to find...a Cetavolver and a False Dawn. I'm not sure what I said, but you could represent it by holding down the shift-key and pressing 1, 2, 3, 4, and 5. Whatever the opposite of "w00t!" is, it came out of my mouth.

In the end, I remember those cards with some fondness. I traded the Cetavolver for something (two sleeves and a bead, maybe) and it appears with regularity in our multiplayer games. I have a sixth sense when it comes to predicting its imminent presence on the board. False Dawn, meanwhile, has also come up in our games. It's practically a Brainstorm in Reject Rare Draft.

Anyway, so, um, Ice Cave. This is another difficult-to-use Apocalypse rare that also happens to be a bit of a pet card of mine. Well, not so much a pet card, since I never use it, but I have been completely locked out of the game by it on more than occasion. As a result, I still hold a grudge against it, but, strangely, at the same time I regularly think of ways to make it more effective. I don't understand this compulsion, but then, who really knows what evil lurks in the hearts of men? Probably no one.

The reason I bring up Ice Cave now is because Shadowmoor just dropped in to lend it a helping hand. Two rares in particular make life much easier for the Ice Cave player. The first is Prismatic Omen, a nice upgrade of Pulse of Llanowar. To counter spells with the Cave, you need to pay the spell's mana cost (mana cost includes colour), so turning each of your lands into a painless City of Brass (with all five basic land types to boot) is a real boon. The other rare is the admittedly less underappreciated Vexing Shusher. Dubbed Goblin Librarian by no one in particular, the Shusher has some advantages over similar cards. Unlike Gaea's Herald, it is itself uncounterable, and unlike Root Sliver, it can make noncreature, non-Sliver spells uncounterable as well.

There are other ways to make yourself relatively immune from Ice Cave, to break the symmetry. I went over many of them in an old article I wrote for StarCityGames.com, but there are some new ones. Besides cards with cycling triggers (like Krosan Tusker), cards with either transmute (Muddle the Mixture) or replicate (Train of Thought) are either impossible or very difficult to counter using Ice Cave alone. The various evoke Elementals (Mulldrifter and company) can also pose problems, since you can play them for cheap if you just want the comes-into-play ability but your opponent will have to pay full price if he or she wishes to counter them with Ice Cave.

My final deck also features some of the usual anti-permission techniques, like man-lands and Boseiju, Who Shelters All. Note that split second spells can be countered by Ice Cave, since, like Counterbalance, Ice Cave has a triggered ability.

There are a number of potential win conditions for this kind of deck. Decree of Justice is very good. You could also try the always fun Bringer of the White Dawn and Mindslaver combination. All of the Bringers are nice with Ice Cave, since you play them for

but your opponent would have to pay nine to counter one. In the end, I went with Horde of Notions because I'm already using Mulldrifter, and Coalition Victory, because it works well with both Horde of Notions and Prismatic Omen. As always, season to taste.

1 Boseiju, Who Shelters All
60 Cards

Until next time, have fun doing stuff, like, um, playing Magic!