hard to find the truth when the entire world is set up by someone who wants to hide it. Our elvish hero, Glissa, is finding that out the hard way. Allies have died for her, and she just barely escaped from perils ranging from rampaging Nim to shaking Vedalken politics to its very core. Unlike Glissa, who’ll have to face death a few more times to find the truth, you, the player, will find out a lot about Mirrodin, Memnarch, and his plans in the latest Magic set. And you’ll do it for the low, low price of doing something you love anyway! Darksteel is full of cards and mechanics, and that’s all well and good, but if you’re reading this, you want to know about flavor. You want to know about the world. While neither the cards nor I can tell you everything, you’ll certainly get enough to whet your appetite and set your speculative minds on the right path. The Darksteel set is all about getting below the surface, both poetically and literally.

Let’s start with the “man” behind it all: Memnarch. The introduction for the Mirrodin novel gave you a small hint about who and what he is, but his absence throughout the rest of the book is quite deliberate. He’s a bogeyman, a shadow, an unseen manipulator who has controlled everything behind the scenes for longer than most Mirrodin inhabitants are aware. Glissa’s journey is the first step in bringing him and his plans into the light.

Memnarch is much like Mirrodin: the creation of an awesomely powerful planeswalker whose name will probably be familiar to most modern Magic players. Memnarch was (and mostly still is) an artifact creature made to be the warden and guardian of this world in its creator’s absence. But what no one counted on was the introduction of a small, but insidious, infection from an unknown source. Over the centuries of Mirrodin’s history, this infection has not only affected Memnarch, but the entire planet as well. Deep in Mirrodin’s huge hollow core, which is a place we’ll visit more than once during our discussion of Darksteel, a huge lattice of a substance called mycosynth has grown across the interior surface like a fungus. This growing metal network absorbs mana from the planet’s core, spreading across the innards of the planet in the form of towering colonies. Those who know about it believe that it is the cause of the odd half-metal/half-flesh life forms that populate the planet. Could they be right?

Whatever the origin, whatever is causing beings like the Leonin to give birth to cubs that are already half-metal is also twisting Memnarch’s shape. He is becoming more organic even as his test subjects, the beings of Mirrodin, grow accustomed to their half-metal forms. His desperation to reverse this trend, the long absence of his master and creator, the desire to shape Mirrodin the way his creator did, the dark urges for power and perfection that he doesn’t realize are subtle effects of the mysterious infection—These are all factors that drive Memnarch’s research, fuel his ambition, and motivate every decision that affects the very fabric of Mirrodin. With his myr servitors (which are everything from scouts to warriors), and his artifact creations (like the levelers, which cull populations that grow too large or independent for his experiments), he has turned the planet into a gigantic laboratory, so he can gain the knowledge to fulfill his greatest desires. Almost none of Mirrodin’s life is really native to the plane; as hinted at in the Mirrodin novel, its denizens have been taken from their homes and placed in this world-sized terrarium. Whether they’ll ever leave is an open question.

Some of Memnarch’s best research has taken place within Mirrodin’s core. This is where he has chosen to establish his main laboratory and base of operations, with good reason. Not only can he examine the mycosynth that has spread itself all across the core, but he can also do as the Vedalken and Neurok above him do: observe and perform experiments on the blinkmoths.

The blinkmoths are odd, tiny flying creatures that are the very soul of Mirrodin, and one of the planet’s original species. Beings with poetic souls consider them beautiful, for they glow in the night like fireflies with an eerie blue-white light. Swarms of them have been known to fly across the planet in complex formations, sometimes vanishing into Mirrodin’s core. Unfortunately for them, the blinkmoths are not just pretty, they’re useful. When isolated from a swarm, individual blinkmoths die. Their destruction produces a tiny amount of the liquid known as “serum.” A being that drinks serum finds his mental capacity and intelligence instantly augmented, making serum, and thus blinkmoths, a highly sought after commodity in the Spires. Do the Neurok and Vedalken not know that the blinkmoths they are so callously harvesting are vital to life on the planet? Or do they simply not care? After all, the Vedalken are one of the few species on Mirrodin that not only know about Memnarch, but willingly serve him, in exchange for promises of knowledge that the Vedalken have been seeking for millennia. What this knowledge is, and what Memnarch demands of his puppets, is a secret that the Vedalken are very good at keeping.

Aside from the mycosynth columns and blinkmoth clouds, Mirrodin’s interior is barren. But it’s this emptiness that makes it useful to Memnarch. Away from the meddling of the surface creatures, here Memnarch can practice his greatest achievement as an artificer: the forging of darksteel. This black metal seems to absorb light, and it emanates strange orbits of golden light, revealing its magical nature. Darksteel can be forged and shaped only by magic, and once it cools, it can never be destroyed. Like all such valuable materials, only Memnarch and his favored few have any access to this ultimate metal.

One ancient legend may yet change everything. There are stories of a great champion called Kaldra, whose spirit is bound into three pieces of weaponry scattered across Mirrodin. Reuniting these objects is supposed to return the ancient being to life, but no one has ever found the three pieces to find out. Who knows whether the legends are true, and what’ll happen if the rejoining ever takes place…?

With Memnarch taking a personal interest in Glissa for reasons unknown, Bosh’s slow recovery of his memories, and hostility from most of the major races on the planet, our heroes certainly have their work cut out for them. Especially with a villain who rates a card like this. 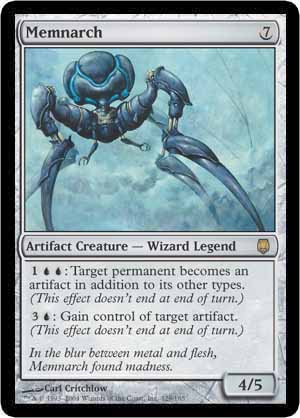 Memnarch craves control, so it’s no surprise that his card facilitates that. His meddling with the natural order is also perfectly reflected in his abilities. Either alone would be interesting, but together, they’re a doozy. For the bargain basement price of

, any permanent on the table is yours forever. Considering Memnarch’s history of snatching up entire species for his personal laboratory, I can’t think of a better way to match his personality. With a little mana acceleration (like green, or the Urza lands from 8th Edition), you can quickly start dominating the permanent count. Start taking lands, and there’s little hope of your opponent ever getting his stuff back – or winning the game! Tinker may be banned in Extended, but it’s perfect for retrieving both Memnarch and the mana producers you’ll need to make him effective. But don’t forget about each ability alone. Teaming up the story’s villain and hero will give you a potent destructive combo, and in this artifact-heavy block, you may find dozens of theft opportunities in your play group even without Memnarch’s conversion ability. Of course, just by using blue mana, he also combos with another spell in this set, one all dedicated blue players have been dying for…

But that’s a story for another day. The story here is more important. Now that the curtain has been pulled back, and the threat revealed, things are even more dangerous for our favorite Viridian elf than ever. She has a better idea of what she’s up against, which adds to her urgency. It remains to be seen how she, Memnarch, and the rest of Mirrodin will deal with the Fifth Dawn… Hope to see you then to find out!