recently spent an afternoon interviewing members of Local Enchantment Users Anonymous, a local support group. And by “interviewing,” I mean “giving noogies to.” Local enchantments?! Everyone knows they're the worst cards in the game. Everyone but these saps.

“Sometimes I like to play Holy Strength on my Grizzly Bears right before attacking,” said purple nurple victim Louis Flugelbiffle.

“I can't stop putting five enchantments all on the same creature,” cried Francine Oljipommo, who also couldn't stop hitting herself.

Have these people never heard of “card disadvantage”? When you play a local enchantment onto one of your creatures, you're giving your opponent the opportunity to wipe out both of your cards with a single one of his: Rend Flesh or Electrostatic Bolt, for example. That's just not a good idea.

Some local enchantments try to fix this inherent imbalance on their own. First up are the ones that go on your opponent's creature, not yours. There won't be any two-for-ones here, and the enchantment often serves as removal. Then there are the local enchantments that can be played as instants. Holy Strength has to be played before you attack, giving your opponent the last word in blocking. Indomitable Will, on the other hand, can be played after blockers are declared or when your opponent tries a burn spell, acting as a surprise boost that thwarts your opponent's plans. The fact that it sticks around permanently after that is a bonus. Finally, there are the self-aware local enchantments that make up for their own weaknesses. Elephant Guide gives you a replacement 3/3 token when the creature it's on dies—so even though you've lost the enchantment, you still have a creature. Rancor and its ilk automatically recycles itself so that long-term, you haven't lost the enchantment card. Unquestioned Authority is a cantrip, which negates potential card disadvantage right up front. See? Local enchantments aren't so bad. Thanks for reading, and until next week…

Did I forget something? 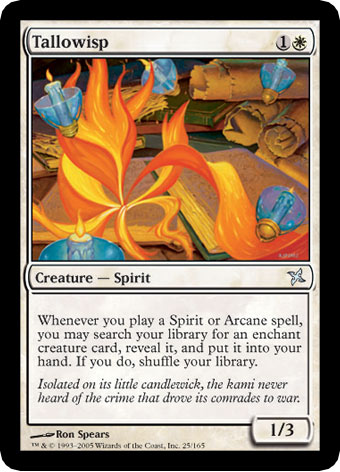 You want to take the card disadvantage out of local enchantments? How about setting up a free way to tutor for one or two of them every turn? Now your local enchantments are pure card advantage, and the worst thing that can happen to them is they go back to being card neutravanatage. Nonplusorminusvantage. Evenvantage. Uh, is there a word for that?

, you shut down an opposing creature for every single creature you play. Heck, even if your opponent has no creatures, you're at least fishing the enchantments out of your deck so you don't draw them normally.

Pondering Tallowisp, I can't help but ruminate on some of the grander eternal questions of life. Questions such as “Where's the other w?” Tallowwisp. Tallow-Wisp. Tallowwwwwisp. Just because the letter has “double” in its name doesn't mean it counts twice. Questions such as “Who keeps their dry, brittle scrolls and books next to an open flame and a bunch of dancing candles?” That's just asking for trouble. Unless… there's some sort of insurance scam going on here. Oh, those Minamo School masterminds. They're always thinking.

Tallowisp is not the first of its kind, of course. There have been other creatures whose abilities try to offset the potential disadvantage of local enchantments and put them to good use. Hakim, Loreweaver. Iridescent Drake. Rootwater Shaman. Academy Researchers. Thran Golem. Rayne, Academy Chancellor. Nomad Mythmaker. Kitsune Mystic. And the card that is really my entire excuse for writing this article, because how often do I get to mention RABID WOMBAT?!?!? Woot.

Tallowisp is a pretty versatile card because any repeatable tutor effect is pretty versatile. The decks you build around it are somewhat limited (they've got to be full of Spirits and creature enchantments), but there are different directions you can take. There's the Control Magic variant route. There's the pure toolbox route (Tattoo Ward is tutorable enchantment destruction, for example). And there's the goofy beatdown route. Guess what I'm taking next.

Blinking Spirit is a ridiculous combo with any creature that has a “spiritcraft” ability, and Tallowisp is no exception. Keep bouncing and replaying Blinky and you fill your hand with cards. If only there were a creature enchantment that you could fetch with Tallowisp, that also happened to be the same color as Tallowisp and Blinking Spirit, that somehow gave you a crazy reward for having a hand full of cards. Oh, well. It's too bad Empyrial Armor was never printed. Wait a sec… it was! Oh, happy day!

Once you're reaching far enough back in time for Empyrial Armor and Blinking Spirit, the sky's the limit. Why not take advantage of the number of enchantments you'll have with Ancestral Mask? Why not have some of those enchantments be Elephant Guide and Armadillo Cloak? And with all those toughness-pumping enchantments, why not use the Judgment Phantoms as some of the deck's Spirits? It's nice when a Phantom Nomad can follow itself up with an Empyrial Armor that it picked out personally.

1 Coalition Flag 1 One with Nature

Until next week, have fun scheming with Tallowisp. (Soon it will be real…)
Mark