Shuffle! I Dare You!

of the perks of preview weeks is that I get to write those grandiose paragraphs that always come right before showing off the new card. They paint an historical picture, creating a context that demonstrates how smoothly the new card fits into the Magic universe. And they're so, so cheesy. Here comes one now . . .

Watch me do this with a straight face.

Shuffling has always been an important part of the Magic game. In fact, it's so integral to Magic that it's the very first thing each player does! Without the art of randomization, the trading card game genre would never have gotten off the ground. Imagine a game where all decks were stacked! Not very interesting, is it? Shuffling allows chance to creep into this game of skill and strategy. It lets each game play out differently, it rewards robust and consistent deckbuilding, and it lets the underdog sometimes pull off surprising victories. Without shuffling, there would be no topdecking! A great breakthrough was made in game design with the introduction of cards like Natural Selection in, um, Alpha. Now players could shuffle during a game! You weren't stuck with the original card order of your library. Over the years, shuffling took leaps forward with mechanics like pulling a card out of a player's library and shuffling to preserve randomness, and the converse concept of shuffling a card into a player's library. So yea, we owe a mighty debt of gratitude to the concept of shuffling. You could even say that it's the very soul of the game. Which makes it even more shocking that today's preview card shockingly strikes a jagged dagger into that innocent soul. Oh, shuffling, why has Mirrodin abandoned you? 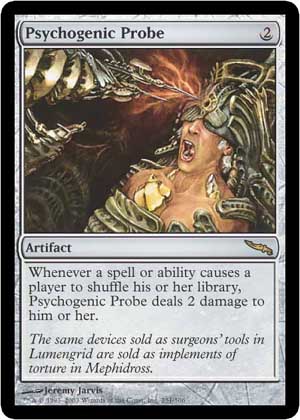 Wacky, huh? Some might say nonsensical. There's a very good reason I was given this card to preview. I just wish I knew what it was. My best guess is that it highlights just how bizarre the Mirrodin set will get. You can't tell me that you saw this one coming.

Psychogenic Probe reminds me of Ankh of Mishra, a 2-mana artifact that punishes players for performing a normal, necessary game action. The main difference is that every deck has to play lands, thus triggering the Ankh. Not every deck has to shuffle itself. It makes for a mean little counterstrategy against those decks that do, however. Sick of landcyclers? Try the Probe. That'll learn 'em for recurring Eternal Dragon over and over. Miffed that lands are $10 rares? Those players who run Wooded Foothills and Flooded Strands won't be so enamored of them when it costs them 3 life to fetch a basic land. Possibly the best use of all is to thwart Mind's Desire. Read that card carefully and you'll see that each time it—or a stormed copy of it—resolves, its controller has to shuffle his or her deck. It's usually best to point out this fact to your opponent when the Probe is in play and ten or so copies of Mind's Desire are on the stack. Now that's a combo.

While acting as a countermeasure is Psychogenic Probe's main function, it's not it's only one. Now that shuffling can be used as a damage source, there's a very bizarre proactive shuffling deck out there you can build. Shuffling has been used as a damage source once before in the history of Magic, but in a rather different way. Back when card sleeves weren't as prevalent as they are today, some players who lacked the most expensive cards would use the Alliances card Soldier of Fortune to shuffle their opponents' decks many times a game. This wasn't to thwart Brainstorm tricks or deal damage via a Psychogenic Probe predecessor—it was to scuff up any copies of the Power 9 (Black Lotus, Time Walk, Timetwister, Ancestral Recall, and the Mox Ruby) in that player's deck. An extra seven shuffles a game, every game, would quickly take the minty freshness off those very valuable cards. By forcing competitors to leave their Power 9 at home unless they wanted to face some heavy depreciation, Soldier of Fortune wielders evened the playing field in a pretty slimy way. But back to the bizarre proactive shuffling deck.

The idea, of course, is to make your opponent shuffle his or her deck as many times as possible. Cards like Repopulate and Gaea's Blessing will force your opponent to shuffle even if there aren't any cards in his or her graveyard. While you're doing that, you're staving off assault by bouncing any immediate threats and by removing the best cards from your opponent's deck. In some cases (thanks to the Grinning Totem and Bribery), you're even using them yourself. Splinter, always a fine card, should see a resurgence in popularity after Mirrodin comes out. This deck is not very strong—but it's really strange and incredibly annoying. So it's a winner in my book.

There are a number of other cards that let both players search their libraries for cards, then shuffle. These become very interesting with the Probe out (which, keep in mind, will damage you as well). When you play Weird Harvest, will it be worth it to your opponent to take some damage in exchange for tutoring out a creature? How about with New Frontiers, or when Noble Benefactor leaves play? What if this quandary is posed in a multiplayer game? It's all very interesting. But more importantly, it's all very weird.

Until next week, DON'T SHUFFLE YOUR LIBRARY!!!