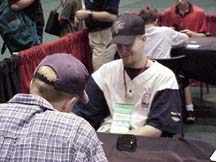 Wachter is one of the better-known JSS players thanks to his on-line articles regarding the Super Series. Living Death has been his deck of choice for a long while now and there was little doubt he'd play it today, even though Wachter himself did not make the final decision until late last evening.

Keady is a former teammate of Wachter's, who recently won the North West regional championship and will be competing in Nationals a month from now. Keady is playing Necro.

In the first game both players used a lot of disruption. Keady played Duress and Nevinyrral's Disk to take care of Toby's creatures and Survival of the Fittest. Wachter cast two Lobotomy, removing Keady's Yawgmoth's Wills and Dark Rituals from the game. At this point each player was down to zero cards in hand and no non-land permanents in play. It would be a race to who drew their most potent spells first.

Luck was with Keady this game as he drew and played Necropotence on the very next turn. There was no way for Wachter to compete with this card advantage. Several turns, a Drain Life and a Corrupt later the game ended.

Wachter seemed to fare better in the next game. He got a Survival on the table and went kept Keady down to 3-4 lands with a couple of Avalanche Riders. Keady finally cast Dark Ritual, Yawgmoths Will and completely turned the game around. In one turn he was able to remove Wachter's creatures and discard his hand, gaining another card off the Urza's Bauble in the process.

Wachter did not find a way to deal with Skitterng Skirge quickly enough. Despite gaining a few life points with Radiant's Dragoons, he could not stay alive too much longer and was unable to draw the only card that would bring him back into this game - Living Death.