Signing Onto the Guildpact 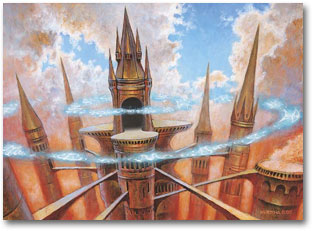 he Guildpact has kept Ravnica stable for thousands of years. But with ten guilds vying to become the dominant force on the planet, there's always a chance that things will break down. Guildpact continues the story of this massive city, and introduces players to three more guilds. With mad scientists, false priests, and angry anarchists running around, things will get even more interesting in both tournaments and the creative setting.

But before we discuss guilds, I'm going to fulfill a promise from my first Ravnica article and take more of a look at the plane at large. The Guildpact, for which this set is named, is a treaty formed from bloodshed and self-interest. Though its creators did want to keep Ravnica from being destroyed through constant warfare, they naturally set out terms that would keep them and their organizations in power for as long as possible. The Paruns, the ten original guild founders, pooled their magic, creating a treaty that can enforce itself. Certain agreements in the Guildpact, if broken, bring automatic magical consequences on those who defy them. But even with this special treatment in place, the guilds constantly twist the letter of the law to the breaking point, finding loopholes and contradictions that allow them to get around the spirit of the pact. Thus the guilds continue to do pretty much whatever they want. (By the way, only four of the Paruns are still alive and running their guilds when the Ravnica set first opens: Razia of the Boros Legion, Niv-Mizzet of the Izzet, Szadek of House Dimir, and Rakdos of the Cult of Rakdos.) 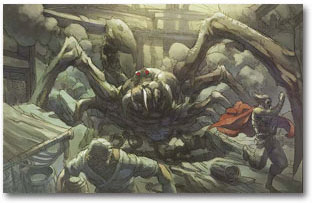 As you know, the ever-growing population of Ravnica has tamed nature, squeezing it into spots of isolated gardens and parks. But just as pigeons and rats run free in real world cities, there are still wild things roaming about here, too. Some make their homes in whatever environment most resembles their lost habitats, such as gharials in the sewers and drakes in tower spires. Others are used by the guilds for their own purposes, such as the pegasi that the Selesnyans ride, or the giant frogs that the Simic use in their life-manipulation experiments. Certain species deemed dangerous, such as dragons, have been hunted virtually to extinction. Some beasts try to ignore the sentient races as best they can, while others have formed an affinity with certain guilds, usually ones that indirectly help them find prey and nesting sites. This latter group forms the core of wild animals that are represented by gold or split-mana cards. Just because they're untamed doesn't mean they can't unwittingly serve the guilds. Everything and everyone on Ravnica serves the guilds in one way or another. 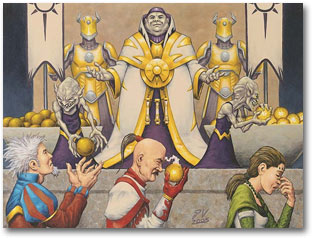 The majority of Ravnican citizens are not part of the guilds. Thanks to the Guildpact, though, their numbers cannot break their oppression. To the guilds, the common man, woman, and child are merely customers, worshippers, slaves, or experimental subjects – in other words, tools. Since no one can even conceive of life without the guilds, the average citizen is content to toil in powerlessness and obscurity, keeping their head down and hoping that they aren't caught in the middle of a power struggle. However, there are a few, a very few, who work to defy the guilds. Some take it upon themselves to keep their neighborhoods and districts safe, trying to break the guilds' monopoly on security. Others seek to return Ravnica to the way it was before the massive cities, before the Guildpact. The Cult of Yore, a faction of militant druids, is one such force. Another mysterious group worships the Nephilim, said to be ancient beings of godlike power forced underground by the cities and the guilds. But do they truly understand the forces they are meddling with? 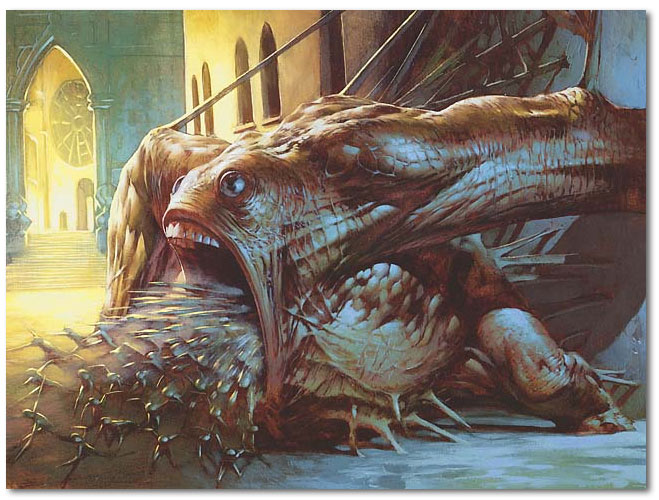 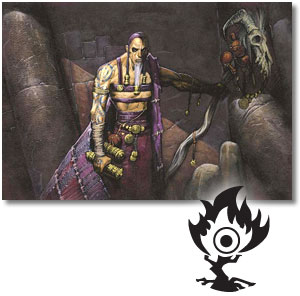 Still, any way you look at it, the guilds are the centerpiece of Ravnica, and three more emerge to take their rightful places of power. The first is the Gruul Clans, the “lost guild.” Centuries of politicking and military blows have destroyed this once-proud guild, shattering it into dozens of individual war clans. The Gruul lurk in the wastes and slums of Ravnica, living off the land and stewing in undirected anger. Each clan has its own army, its own leader, and its own way of doing things, but they are all united under one goal: complete anarchy. They wish to raze the cities that rejected them, and destroy the guilds that brought them low. This might have made them heroes among the common classes, but their arrogance and indiscriminate appetite for destruction are a constant reminder that the Gruul are still a guild at heart. As it is, the most public face of the Gruul is as an informal “beggars' guild,” an image which belies the simmering rage below the surface.

The last refuge for civilization's castaways, Gruul forces include beings as diverse as misshapen humans, bloodthirsty goblins, and wurms and beasts that trail their armies, eager to dine on fallen armies and nest in the piles of rubble left behind. The Gruul's power lies in their sheer destructive force. Whole city blocks have been destroyed by just one war clan, and their splintered nature means that dozens of raids can occur at once, making it a lot harder for the “civilized” guilds to stop the threat or destroy the Gruul entirely. Though the Gruul have no one leader, they respect power, and Borborgymos is the most powerful chieftain of all. He is one of the Gruul's fiercest fighters, leader of the largest war clan, and is rumored to be a descendant of the Gruul Parun. Thus, this savage cyclops is usually at the head of the largest, most destructive raids. 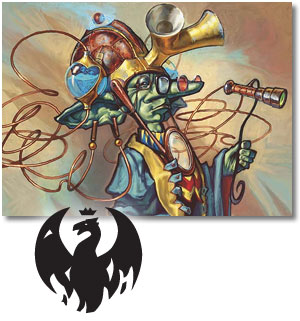 Next come the Izzet, who are responsible for most of the civic works that keep Ravnica going. The Izzet designed the sewers, built the foundries, and stocked the markets with every necessity and every luxury. They are tinkerers and researchers at heart, never satisfied, always working towards a bigger device or better sorcery. In fact, they're the only ones who understand how and why magic itself functions, knowledge that led to their “planar universes” theory, and speculation on how it's affected life and death on Ravnica. The Izzet are intensely focused on their work, making them the guild least interested in Ravnica's politics and daily intrigue. On the other hand, those work interests constantly shift. The Izzet are easily bored, and jump from one inspiration to the next, one theory to the next. As a result, the best Izzet projects usually pass from wizard to wizard multiple times before being completed. This impatience and eagerness for results leaves its mark all the time, usually in the form of huge, burnt-out craters. But they are content to let someone else clean up their messes; they have little interest in anything but their work.

The dragon wizard Niv-Mizzet is a perfect representation of the guild he founded. He is one of the most brilliant beings on the planet, although his temper has cost him more than his share of charbroiled apprentices. Among his creations is the weird, an artificial elemental that he intends to be the next generation of Izzet servitor. This role is currently taken up by goblins; however, Izzet goblins tend to have a highly inflated opinion of their intelligence and usefulness. Worse, they are very slow to take a hint, so they are only now getting a dim idea that these new weirds are a threat to their position. In the end, despite all of these internal conflicts and odd habits, the Izzet are undeniably the top creators of magic and magical items on the planet. 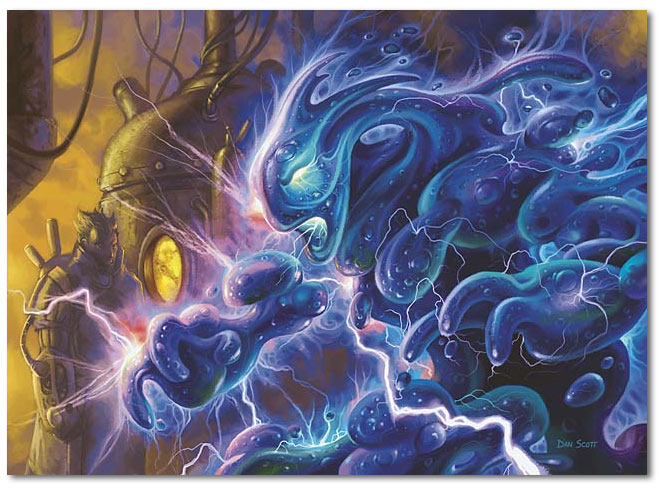 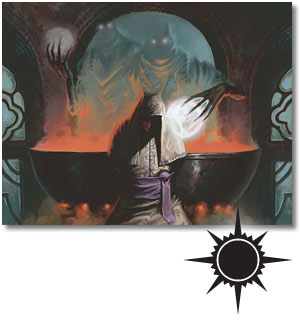 The Orzhov Syndicate once followed a genuine religion, but these days, their gods are power and wealth. They only keep up vestiges of their old faith because of the entrenched power structure, not to mention the control it gives them over the masses. The Orzhov thrive on business, the buying and selling of everything from spells to land to slaves. They founded the Moon Market, a shadowy bazaar where literally anything can be bought for the right price. Thanks to their skill at deals, not to mention a well-placed bribe or three, Orzhov influence is felt everywhere, from the highest Azorius court to the lowest street gutter.

Their servitors include animated gargoyles and thrulls, which are created from corpses, often the dead bodies of lesser Orzhov leaders. When the most wealthy and powerful Orzhov die, complex necromantic rites resurrect them as ghosts, unbound by whatever dark forces limit the common shade. Thus the Ghost Council holds only the greediest, sneakiest, most intelligent minds, dating back from the founding of the guild. Their centuries of experience, along with their legions of lawyers, have made the Orzhov the most adept guild at twisting the Guildpact to their advantage. Though they may lack in martial might, they more than make up for it in wealth and cunning. 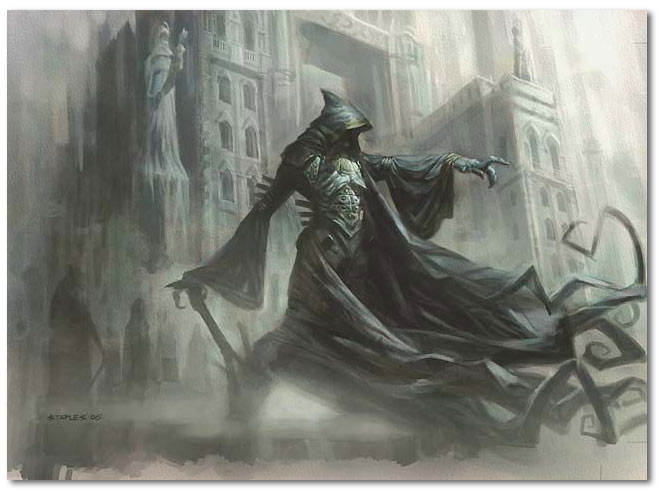 It's appropriate to finish the list with the Orzhov, for the Guildpact novel's main character is Orzhov: Tesya Karlov. Although Agrus Kos and his journey do continue here, it's Tesya, a smart and savvy Orzhov lawmage, who gets most of the attention. With a few well-chosen words and a couple of well-planned smiles, she can make practically anyone dance to her tune. When the novel opens, she is given an opportunity for great power and wealth, an opportunity that no true Orzhov can deny. But even someone as intelligent and ambitious as her can be used by the guilds. Unfortunately for them, she has the resources and smarts to fight back. What will happen when she decides to defy the powers that unite the entire planet?

You'll have to find out for yourself in the novel. But as you've probably guessed by now, Tesya also appears as a card. Specifically, she appears as this card: 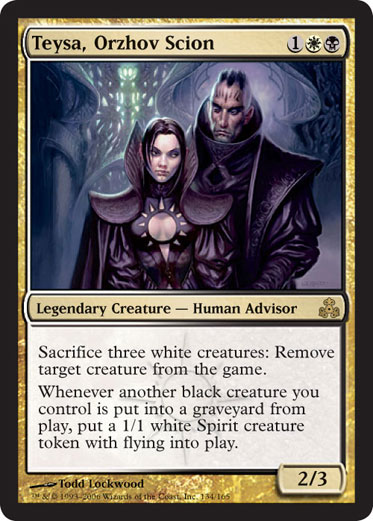 All Orzhov are expected to know something about ghostly matters, and Tesya's no different, as her card amply shows. Her ability to remove creatures from the game speaks to her skill at manipulating the law, not to mention her powerful family heritage. Put them together, and you have the potential for some dynamite moves against your foes. Mix in a few sacrifice effects, and you'll not only have an army of small flyers, but also enough ammunition to take down any creature that gets in your way! In a world as harsh as Ravnica, you have to have something special to thrive, and Tesya has that in spades.

Of course, neither the guilds, nor Ravnica as a whole, will give up all their secrets just yet. There are still a few questions to be answered, a few shadows that need some light shed on them. But until next time, enjoy what the Guildpact brings. Just make sure to follow one of the most common and useful Ravnican credos: don't trust anyone…