elcome to another edition of Sketches! Today we take a look behind the scenes of the creation of that enormous 15-mana trampler from Ravnica: City of Guilds, Autochthon Wurm. But first, some background on the artist, Michael Phillippi.

Artist Michael Phillippi is new to Magic illustration as of Ravnica, contributing Drift of Phantasms and Light of Sanction in addition to the Wurm. However he's no stranger to fantasy and sci-fi illustration, having worked previously with Wizards of the Coast on Legend of the Five Rings and on other projects as a freelance illustrator, art instructor and conceptual artist.

The first step of the creation of a card's art is its art description. The art description tells the artist what the card will do, what its flavor is, and what the mood of the illustration should be. Here were the instructions given to Michael for Autochthon Wurm: 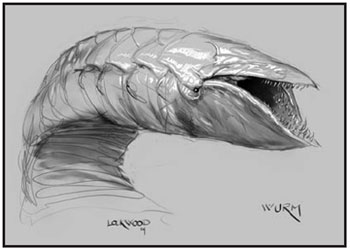 Color: Green/white guild
Location: City block
Action: Show an enormous wurm (p. 50 of styleguide), easily triple the size of most of its kind, breaking through the surface of the land in the middle of a city block. Its emergence tosses aside stone buildings as it opens its mouth to eat whatever moves. For scale, please show a few GW-guild pegasus riders flying around/behind the wurm and they look tiny.
Focus: The giant wurm
Mood: Like a blue whale breaching, but the whale is a wurm and the sea is a whole city district.
Notes: Think of how tree roots break concrete: "trample/smash" 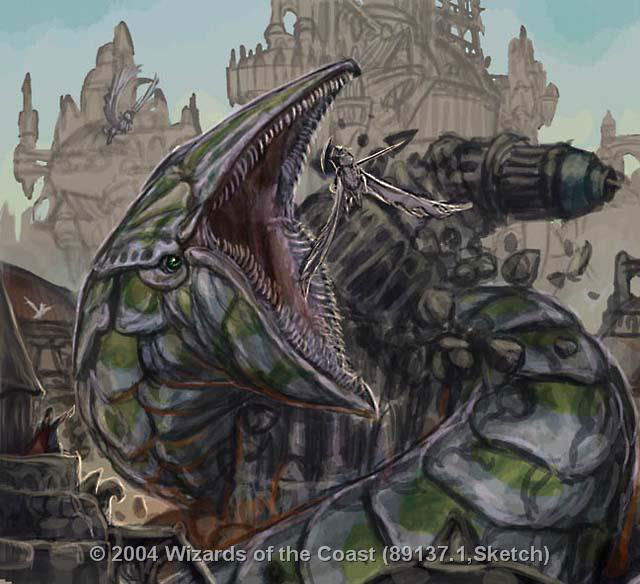 The art team loved the impact of the wurm, but worried that the pegasus-rider in the foreground looked too much like it was being eaten; the Selesnya Conclave wurm shouldn't be eating the Selesnya Conclave pegasus-rider. In addition, the size of the pegasus wasn't tiny enough compared to the wurm -- this guy is a 9/14, it should be BIGGER! So they asked for another sketch. 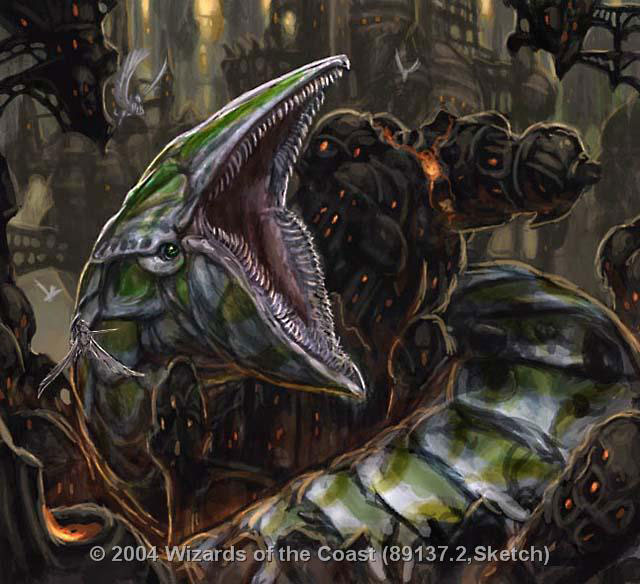 Now we're talking. Here you can see that the wurm is dominating several city blocks, truly like a breaching whale in a tumultuous, concrete sea. Here the art team's main complaint was the lack of armor -- as we've seen in a previous Magic Arcana, the Selesnya Conclave domesticates its creatures. To show that, despite its incredible size and destructive capacity, it is still an honored member of the Conclave, it must wear that trademark, shining, overlapping plate armor. 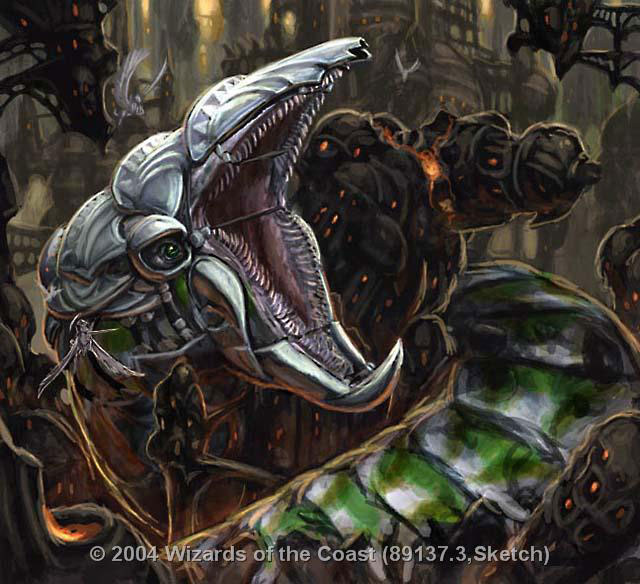 This is right on. Michael has captured the wurm's district-shaking immensity, its relative size compared to the guild-mate pegasus-riders, and its characteristically Selesnyan armored look. Time for the final painting. 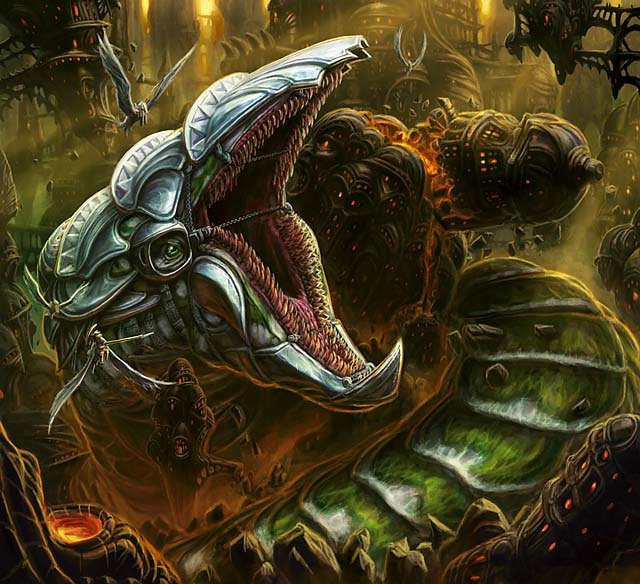 And here's the card in its final state, as you can see in booster packs of Ravnica: City of Guilds. Convoke out the biggest creature in the set (with a little help from Michael Phillippi) with Autochthon Wurm!