Tribal Week here on magicthegathering.com, and just to celebrate, the Extended metagame decided to sync up with the site. Check out that new first place archetype! With less than 24 hours until the Pro Tour, Goblins jumps three percentage points from second to first; meanwhile last week's darling, CounterTopTog (CounterTopGoyf), falls 17%, a long way from its previous seat in first position.

For those of you who have not been paying attention since, oh, Onslaught Block, Goblins is about as tribal as tribal attack decks get. This archetype interlocks multiple synergistic creatures, many of which are good individually, but which together can run an opponent right over. Goblin Warchief helps you play your creatures more cheapl, and attack with them more quickly. Goblin Piledriver is a team player if ever there was one... 1/2 by himself, 1,000,000/2 with help. Goblins can fix its draws like a blue deck (using primarily Goblin Matron); it can win very quickly with Warchief and several Piledrivers; it can very nearly combo off with Goblin Sharpshooter and a variety of sacrificial effects from Skirk Prospector to Siege-Gang Commander ... or it can win in a long game either via relentless attacks or just by trying to win an exhaustion war, ever ready with more War Marshals, Ringleaders, and Incinerators. 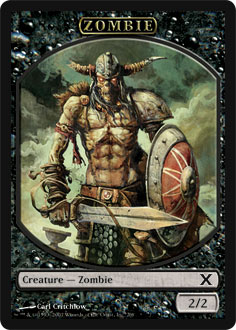 I had all the delta percentages filled out for Extended and Standard but decided to wipe them this week. More than 50% were "NEW," and that didn't make any sense to me (they were not actually new archetypes for the most part... Estimated metagame percentages can look a little volatile week-to-week when you are looking only at Top 8 finishes and assigning value based on finish positions).

Metagaming Extended appears to be extremely volatile. Goblins jumped. Predicted PT boogeyman Dredge peeked up into the top few, threatening to spit Zombies all over Valencia. Top interactive decks plummeted. Old favorites returned. For a "known" format, the upcoming PT seems next to impossible to gauge... Check back to magicthegathering.com tomorrow and all weekend for what should be a fantastic tussle.

Standard is slated for a huge shakeup when Lorwyn becomes tournament legal and Ravnica Block—with its wonderful dual lands and Karoos—ends its popular two year run. I personally can't wait! At this point Standard is a lot about anticipation, and feels a little tired, even with the great number of available Tier Two cards. That said, this week's Standard overview shows the winners of the Worlds Qualifiers as well as your typical Standard PE fare.

The biggest mover of the clump did not feature a great story. On again-off again metagame it girl Dredge lost 23% between this past week and Frank's last installment of Online Tech. Here is an alternate look at the same style of deck, "PeeblesDredge" (after noted deck designer and Internet columnist Ben Peebles-Mundy). This is a PeeblesDredge deck that Bard_Taliesin used in the PEs last week:

3 Life from the Loam 4 Dread Return

This build of Dredge differs from the more typical Flame-Kin Zealot version in that its end game is Nantuko Husk and Stalking Vengeance. According to Peebles-Mundy, more pieces is better than fewer (heavily Dredging into Flame-Kin Zealot being kind of like a "one card combo"), which is counter-intuitive given the style of deck Dredge normally plays as. That said, Nantuko Husk is itself a threat, especially against control, especially with Llanowar Mentor. Stalking Vengeance is a solid reanimation target, and deters Wrath of God and the equivalent. Either one lets you poke away at the opponent without having to commit every last resource to your graveyard plan... Get them both in play at the same time, the opponent is probably dead.

Blazing Archon out of the sideboard is a great utility tool. There are many allegedly aggressive decks that just can't beat it.

Have you ever not known what to play in an upcoming event? Would you be willing to take a little advice? Here is what one Level Six mage would run (same format):

This kind of deck (which I can only assume is the work of Fan Favorite Paulo Vitor Damo da Rosa) creates a lot of "space" in a match. Its answers are reasonably cheap and can be applied to almost anything. Given time (and Dralnu can create that time) Mystical Teachings can set up singleton copies of Spell Burst or Dralnu, Lich Lord to grind out quite a bit of card advantage in the long term (or the overcosted yet often backbreaking Tendrils of Corruption in a pinch), with Teferi managing the opponent's ability to play dirty tricks, certainly the world's best Greater Gargadon trump card.

Dralnu is less exciting than many of the other decks in Standard. It doesn't wow spectators like Blink or dominate unfettered like Dredge. However, it also dodges color screw more effectively than maybe any other deck in the format, and can take on all comers with counters, card drawing, light elimination, and the ability to quickly improve its hand.

Quite near the subject of great Extended Pro Tours (like the one we anticipate having this weekend), this is Brian Davis's deck from the finals of Bob Maher's Pro Tour–Chicago:

While this deck got the name Free Spell Necro for Unmask and Spinning Darkness, so synergistic with namesake Necropotence, the deck's primary route to victory was repeatedly blasting the opponent with Drain Life and Corrupt, which killed while producing life to fuel Necropotence, which in turn dug for more copies of Drain Life and Corrupt, eventually ending the game in a blowout of cards, vitality, and the power of the skull. Brian's deck was by no means unique, but it is probably the most famous example of such a deck with both Corrupt and Drain Life.

Why does this matter?

A common position would be turn four: You have Necropotence (you are a miser), four Swamps, a Dark Ritual, a Drain Life, and a Corrupt. Which spell do you play? Aren't they exactly the same in this spot?

A rookie mistake would be to Ritual, Drain for 2. That's terrible. You aren't saving cards... Your Ritual is actually an Ancestral Recall the way things work out! Let's assume you know you are going to dome for 4... Why is one sorcery specifically better than the other given the same immediate outcomes?

The answer, all things held equal, is to play Corrupt for four rather than Drain Life for four. Next turn, you can still play Drain Life for three; however if you play Dark Ritual + Drain Life, even with the cards you are going to draw, you might have no clear plan. Without Dark Ritual, you won't be able to play Corrupt. With Dark Ritual, assuming a land drop, Drain Life is more mana efficient; no small thing is the case where your land is Wasteland. Wasteland has no effect on Drain Life plus Ritual, but costs you a point (short term) on Corrupt. Tiny efficiencies can add up. The reason playing Corrupt first is better is because looking ahead a turn, you can forward your plan without having to draw a specific card like Dark Ritual. If you do pick up cards that give you some more wiggle room or exploitable angles, all the better... But in this common case, there is no reason to play for "lucky" if you have a nice, consistent path that forwards your agenda without having to catch additional breaks.

What is the takeaway?

Many players play for the play, the stack they are on, and don't look any farther. Last week we talked about imagining all the way to the end of the game. That is important as one improves, but it is pretty hazy around the edges, even as an ideal. As you get better at making short-term plays, think about looking ahead just one turn, but very specifically (if you don't already), down to how you are going to tap your mana setting up for your next "one turn ahead" game plan. I think you'll see some positive results.

In Limited, players often drop first colors haphazardly when they have three land opening hands. Why should it matter if you go Plains first or Swamp first in a Plains-Swamp-Swamp hand? You might topdeck Dauthi Slayer! Don't forget that the most Craig Jones-inspiring and Darwin Kastle / Kai Budde-heartbreaking plays in Magic consistently come off the top of your deck. Kai got to be an Extended PT winner not by knowing that he was about to get lucky, but by looking forward far enough that he could set up a game to take advantage of luck should it come his way. The rest of the time, he just executed on the right plays, moving forward where the path was clear and the strategy solid.

Missed the Prerelease, or just hungry for more? Check out Lorwyn Release Events October 12-14 to play with Lorwyn cards as soon as they go on sale.