you hate it when your creatures die? There you are, minding your own business, innocently creating a horde of hideous monsters for the express purpose of tearing your opponent into bite-size chunks, and your opponent disrespects you enough to try and stop you! That is flat-out rude behavior. I mentioned two weeks ago that Darksteel has a sub-theme, possibly intentional, possibly not, of hosing Wrath of God (though not necessarily Akroma's Vengeance or Oblivion Stone). Equipment is good at this as a rule: the 1/1 bodies are easily replaced while the real muscle (Sword of Light and Shadow, anyone?) sits on the table waiting for someone else to pick it up. Skullclamp in particular takes some of the teeth out of a good Wrathing. Indestructible creatures clearly thumb their noses at the Wrath of a god that was all-powerful just a few sets ago. Arcbound creatures are not invulnerable to board-sweepers (in fact, it's just about the only thing that gets all those darn counters off the table) but they make any other creature removal about as effective as a paper towel in a leaky battleship. So, keeping in the same spirit, here's another weapon in that arsenal: 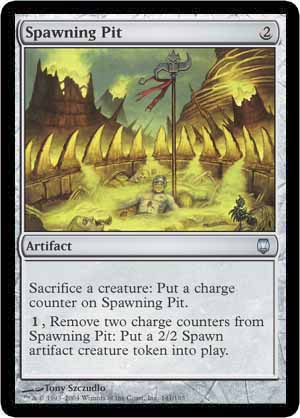 Did your opponent put Wrath on the stack? Sac all your creatures to Spawning Pit. Let Wrath resolve, then pop a few creatures back into play at the end of your opponent's turn and keep right on attacking. With the Pit on the board, each creature you play is really a creature and a half, since it will make up half of a future Spawn token. In fact, that Spawn token is itself half of an even further-in-the-future token, which is then half of a super-future token, and so on—so it's really 1 creature + 1/2 + 1/4 + 1/8 + 1/16 + … = 2 creatures! Just not all at once. (The fact that, unlike many similar-in-spirit cards, Spawning Pit also keys off of token creatures, and thus feeds off itself, is huge.)

Last March, I posted a Lite Bird deck that focused on that tribe's potential for card advantage. But there was something else going on. Soulcatcher and Soulcatchers' Aerie take advantage of their fallen comrades by loading themselves up with +1/+1 goodies. But there was a problem getting that to work: There were few good ways to off your own Aven. Seaside Haven was not a great solution, and the only other option was to bump off the birdies in combat—but that required your opponent to play along. Carrion Feeder came along soon after, but it was very much the wrong color. Spawning Pit, on the other hand, isn't. Now blue and white can sacrifice their brethren just as mercilessly as black can!

That's not enough for me, though. I have to overthink the problem and overshoot the target. See, it occurs to me that it's a crying shame that Spawning Pit produces Spawn tokens. Wouldn't it be better if it churned out Bird tokens? Apparently, that's not in keeping with flavor. Pshaw, I say! Puh(pause)shaw! Hack that thing with Artificial Evolution! Then, with an Aerie in play, you can eat two Birds to give the rest of your air force +2/+2 and spawn a 4/4 Bird token. But that's still not enough. This is a tribal deck that sacrifices its creatures. Perfect fit for Faces of the Past, no? With Faces and a Pit, you can tap some Birds for some effect, sac a Bird to untap everything, then tap them again. This requires Birds with good tap effects, and Crookclaw Elder and Keeper of the Nine Gales fit the (god help me, I can't believe I'm going to say this about a Bird deck) bill.

The last element of this deck is a way to not run out of creatures. In early versions I was toying with the Urza's Saga cards Lifeline and Remembrance, but when I realized that except for Raven Familiar, the rest of the deck was Online Extended-legal, I brought in Sigil of the New Dawn instead. As always, your version of the deck (should you choose to build one) ought to incorporate the best cards you have available to you.

All this mucking about with combo pieces leaves me a bit worried that there aren't enough Birds left. This deck wouldn't even be allowed in the Tribal format on Magic Online because it only has 17 Birds (it doesn't count Battle Screech as Birds #18, #19, and #20 even though it probably should). Like I said, it's overstuffed. The curse of too many ideas. Don't you hate being clever sometimes?

3 Keeper of the Nine Gales 3 Faces of the Past

An Offering You Can't Refuse

Spawning Pit gives the other four colors access to something that is basically black. You know what color would love something like that? Black. Even though it's the king of sacrifice effects, this one is better than most and combos well with Rotlung Reanimator and Grave Pact.

There are more tasty interactions. About a month and a half ago, I audibly yelped as the Nuisance Engine-Death Pit Offering combo smacked me upside the head. How had I not seen that before?! But even after finding it, I couldn't quite expand it into a deck. Not anymore: Spawning Pit greatly alleviates Death Pit Offering's drawback. The only pitfall with putting them into the same deck is Pit confusion. You have too many Pits lying around, you're liable to fall in one. There's a whole theme deck in there (Breeding Pit and Bottomless Pit fit pretty flawlessly into this deck so far, and Lord of the Pit is too perfect), but let's face it—that would just be (here I go again) pitiful. (Y'know, one of the benefits of writing an Internet column is that when I make puns like that, none of you are close enough to hit me.) Anyhoo, each pair of parts from the Engine-Offering-Pit triumvirate is good together (without the Offering, you get wiggy 0/1 + 0/1 = 2/2 math), and all three click together nicely.

How about Lightning Coils? It has a lot in common with Spawning Pit—so much so that they might seem redundant. They're both cheap artifacts. They both transform dying creatures into new token creatures. They were each my third preview article for their expansion. But rather than just being a “new” or “better” or “more rocktacular” model, Spawning Pit is actually a great complement for Lightning Coils. Sacrificing nontoken creatures to put counters on the Pit puts counters on the Coils too. When the Coils is about to pop, you can spawn some Spawns in advance for an overwhelming attack force. And before the Elemental tokens from the Coils fizzle away, you can sacrifice them to load up the Pit with at least five new charge counters.

How about Dross Harvester? Spawning Pit may be just the thing this bad boy has been waiting for. I know that makes an awful lot of rares for this deck, but you certainly don't need all of the elements presented here. This is just my showcase for as many ideas as possible. Focus on just a couple and load the rest of the deck with enablers, control pieces, and synergistic cards and you'll have fun with it.

3 Disciple of the Vault

And that's my last preview. Just one more to go before the big day! Have a great time at the Darksteel Prerelease this weekend. Besides Reject Rare Drafts, they're the funnest Magic events around, and they're very casual-player friendly. Most of the participants in your area are likely to be casual players who only go to tournaments if they're Prereleases, so you'd be right at home. Have fun!

Until next week, spawn some Spawn tokens.
Mark