Speak the Word, the Word is All of Us 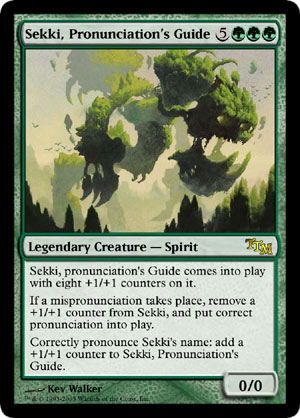 am over three thousand years old, and like a lot of Magic players who are getting along in age, I play a good portion of my games online these days. Not only do I find it extremely convenient, but it's also a welcome respite from the usual living hell I endure whilst playing Magic in person. You see, Magic Online gives me sweet, sweet relief from the phonetic butchery I witness when playing one random human or another.

So I was playing a little Friday Night Magic recently and, after the one-millionth mispronunciation of the word "Magus," I quickly conceded the match to my opponent and fled... straight to Matt Cavotta's house, where I pleaded with him for another opportunity to squat on Taste The Magic and school some misguided humans. I should not have been surprised when he quickly agreed – humans are notoriously lazy, and he was happy to let me do his work for him.

And here we are, Taste the Magic, commandeered by your old pal, Sekki. Today we're going to throw on a huge helping of pronunciation guidance, so that you and all your pals can toss cards in person with absolutely no risk of mauling the names of your favorite cardboard rectangles and no risk of driving an ancient spirit out of his incorporeal mind. I am going to bust out all the words from Time Spiral and Planar Chaos cards that I think are causing problems. Let's have at it:

Magus – It matters not whether it is of the Library, the Candelabra, the Disk, or the Chili-Dog, "magus" is pronounced MAY•gus – like "Nagus," a Ferengi leader. Wow, am I becoming comfortable with this world or what, piling one nerd reference upon another like it was nothing? Anyway, the lot of you who are out there pronouncing it MAG•iss or MAY•jus... well, please stop.

Amrou – They're all over the place these days, those little kithkin pipsqueaks. While they are small, they still deserve our respect. In order to show it, we must remember that Amrou is pronounced AM•roo. Those of you who call it AM•row are just making lots of little people mad.

Benalish/Benalia – This one causes problems, but I can understand why. Like a lot of pronunciation trickery, the catch is in the accent. Correctly accentuating syllables is important and can make you sound a lot smarter than other humans. The catch with this one is that Benalia – ben•AHL•ee•ah sports a different accentuation scheme than its own brother, Benalish, which is pronounced BEN•ah•lish. Bust these out correctly accentuated to impress your friends and drive away cheerleaders.

Chronosavant – Accent on the first and last syllables...strange, yet correct. KRO•no•sah•VAHNT. I've often heard it dispensed incorrectly with the accents on the first and third syllables... odd, isn't it? Ha! I bust myself up. (It was at a moment just like this one when Kev Walker took photo reference of me for his card illustration.)

D'Avenant – Whoa boy, does this one ever get mistreated. Not only are its soft and lilting syllables coughed out like rocks, but an extra syllable is added to boot. This word is not busted out like the name of our good friend, D. Alexander Gregory. It is not "D. Avenant." It is pronounced DAV•nahnt. To impress your French teacher and incur the wrath of your "too cool" friends, drop or soften the "nt" sound at the end.

Foriysian/Foriys – These are really lame words. Matt said that his entire body ached as he finalized the card name, Foriysian Interceptor. Apparently, some joker way back in the old days thought it would be funny to make a creature that has four eyes come from a place called "Foriys." I feel like every time someone utters this word, it must be accompanied with music and sound effects from the Three Stooges. The good thing about this bad word is that its badness actually helps you pronounce it correctly. Even though f-o-r-i-y-s could be spat out any number of ways, the correct way is to just deliver the "joke" and say FOUR eyes (FOR•ize/for•IZE•ee•an). Boo, hiss.

Icatian – The problem with this word always seems to be the first syllable – whether to use the hard "I" sound (EYE•kay•shun) or lazily grunt out "uh"(uh•KAY•shun.) The second way is verrry popular, but wrong. EYE•kay•shun is the way to go folks.

en-Kor/en-Dal/en-Vec – These are all correctly spoken the same way, with the accent on the second part and the "en" pronounced like suburban Clevelanders annoyingly pronounce "on" (ahn). ahn•KOHR, ahn•DAHL, ahn•VEHK. 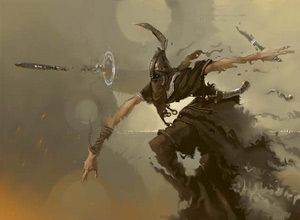 Ixidron – This card is meant to give your opponent headaches, not cure them. It is not pronounced like Excedrin. The accent is on the first syllable, IX•ih•drohn. (Just like its namesake, Ixidor.)

Mawcor – MAW•kohr. Yes, they both fly, but it is not a maw•KOHR, distant cousin of the macaw.

Teferi – Now that Teferi is no longer a planeswalker, I feel I am free to make fun of him. His name is pronounced like "teh faerie." Ha! Big man on campus sounds like a little flitting pixie.
Te•FAIR•ee Zhalfir/Zhalfirin – These are not all that tricky if you just pronounce the "zh" like the "j" in Jacque:
zhal•FEER/zhal•FEER•in

Vesuva/Vesuvan – These words, like D'Avenant, end up with a whole extra syllable when pronounced by Magic players who are not welcome to dinner at my place. If you find yourself pronouncing these words with four syllables, you must dine alone. While you do, please take note that there is no letter "i" in either of these words. The place is not Vesuvia, nor are its inhabitants Vesuvians. It is veh•SOO•va and they are veh•SOO•van.

Lim-Dûl – There are those out there who believe that Lim-Dûl the Necromancer is costed too high, and is therefore dull, but this does not mean that his name is pronounced Lim-Dull. It is LIHM-dool. There are also some three-hundred-thousand-year-old spirits who think the art is dull.

Phthisis – Thank heavens, the "ph" is silent! THEYE•sis. (If you pronounce it this way, you're pretty much good to go, but if you pronounce the hard "i" sound like "bite" instead of "thigh," you can have an extra helping of dessert at my house.

Bogardan – If there was a place where you grew bows, it would be a bow garden – and that is how you pronounce this word, BOH•gahr•den. (Accent on the BOH and not the GAHR.)

Mwonvuli – Even though this looks like a mouthful, it's actually spelled out phonetically, mwahn•VOO•lee.

Malach of the Dawn – One might tend to accent the second syllable of this word, in keeping with the grand tradition of the ever-popular Malachi brothers from Happy Days. Though the brothers were quite awesome, they would steer you wrong in pronouncing "malach." With the accent on the first syllable, it's MAHL•ahk. (Interestingly, it's pronounced the same way as "moloch" (Torpid Moloch, Whiptail Moloch). Even more interestingly, Donnie Most played devil-rocker "Moloch" on an episode of CHiPs, and was also Ralph Malph on Happy Days. Coincidence? I don't think so.)

Porphyry Nodes – Awkward letters make this look worse than it is. POHR•feh•ree.

Fa'adiyah Seer – Pretend you are a Klingon and this will be easier to pronounce. Or just imagine the "Fa" is a separate word, fah•ah•DEE•ah. I cannot express in written English what sort of thingy you should be doing to separate the Fa' and adiyah, but it's called a glottal stop. It's almost like your cutting off your breath after you say "Fa," then continuing it with the rest of the word. Try it at home. If you butcher this one, it's partly my fault, and I will not bar you from breaking bread with me.

Intet, the Dreamer – IHN•tet. Intet and all the other Planar Chaos legendary dragons have two syllable names with the accent on the first syllable. Matt claims this was not intentional, but he says the same thing about Malach and Moloch. In both cases I do not believe him. 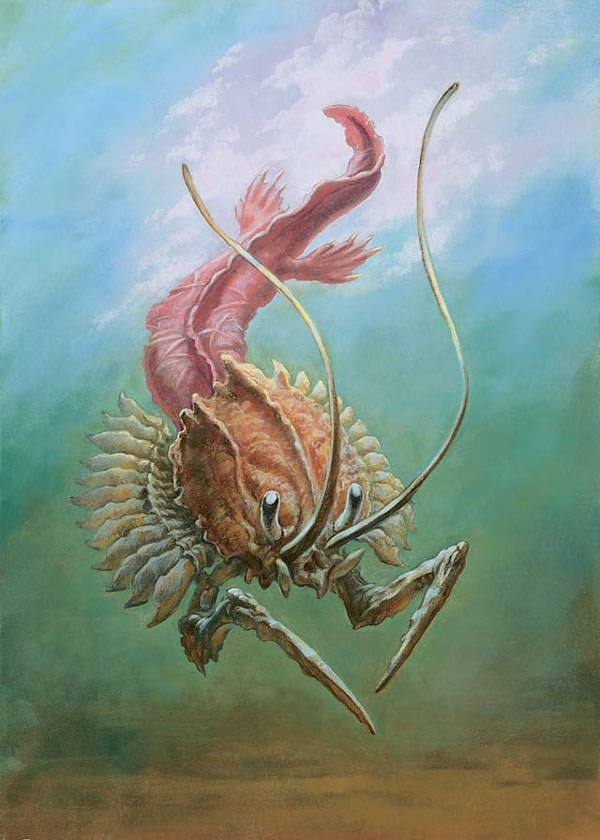 That about covers it. I am going to wait a week or so to let this information seep out into the gaming masses. Then I will venture out again to play with my sweet Camarid deck.