After the four individual matches ended with each team winning two, the team championship came down to a final match between team captains Jon Finkel and Ryan Fuller. Finkel won, 2-0, capturing the championship for the United States.

Who's on the National Teams?   A list of all the players participating on team day more...

Italian Coverage   Urban Legend has provided the Sideboard with a few Italian articles; much more Italian coverage is available at their site. more...

What Standard deck did the best?   The won-loss records of all the popular decks from Wednesday more...

What's everyone playing?   A list of all the players from day one, along with their decktypes. more...

Who's writing this?   A list of the people working hard to bring you Sideboard coverage. more...

The first World Championships of Magic of the new millennium has kicked off day 1 with a diverse showing of type 2 decks falling well within the realm of what one might expect from the metagame. 273 players are participating and the following stats indicate the presence of all deck types: 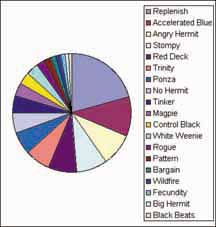 The most interesting things to note concerning this year's type 2 portion of Worlds are the presence of only one somewhat new decktype: Angry "No Hermit." This decktype packs all the same land disruption, mana acceleration, and removal but uses blastoderms as the punch. It is also interesting because a number of well-known pro personalities have chosen the deck amongst which are Zvi Mowshowitz, Alex Shvartsman, Brian Selden, Alan Comer and many more. As could be expected, Replenish dominates the field with around 20%. Red Deck, Accelerated Blue, Stompy, and Angry Hermit combine to represent more than 35% of the field.

It is very refreshing to see a well-balanced wide open field like this where every player can take the deck of his or her choice and hope to fair well with the right amount of testing and a good comprehension of the metagame and the correct sideboard decisions.

Taking into account all decks that contained the card Deranged Hermit they represent almost as great a part of the field as Replenish at 51 decks. This doesn't include the new archetype Angry "No Hermit" which would bring the grand total of green based mana disruption beatdown decks to a whopping 66 which represents almost 25% of the field.

It looks like if the players thought Replenish and Hermit and Blue; the survey says that they were right on.

Below is a list of Alex Shvartsman's version of the Angry "No Hermit":

While many players both in his testing circles and outside have opted to play slightly different versions this is an excellent representative version. After extensive testing and seeing what decks are out there it is a really great deck that is also really fun to play. That is an aspect of the Magic World that is often lacking with players playing combo decks and essentially creatureless control decks.