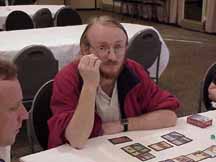 Steven Campbell is probably the most accomplished player in this year's Australian Nationals Meatgrinders. He has been playing Magic: the Gathering since early August 1994 and has placed 12th at the 1998 APAC Championships and won the 1997 Lasseters Indoor Challenge featuring some of Australia's best players. He is attempting to qualify through the Meatgrinder due to his 3-3 match record at Victorian Regionals 2000, playing in the first sealed grinder.

After the deck construction period, Steven had built an extremely solid U/W/G deck featuring a huge amount of big green creatures including Spitting Spider and a number of control-oriented cards in blue and white such as Ensnare, Trap Runner and Waterfront Bouncer. Steven was going to drop from the tournament if the cards he received were of an average quality, but he was confident that the quality of his deck would carry him through.

Due to the number of players, Steven received a bye in the first round, along with a number of other competitors.

Steven opened up in the first game with a number of white control-oriented creatures such as Crossbow Infantry and Soul Charmer, while his opponent played a third-turn Snorting Gahr off a Vine Trellis. Dean attempted to apply with his Snorting Gahr, but Steven's surprise Invigorate stopped Dean's early beatdown plans. The game continued with Dean playing many more big green creatures and trading damage with Steven's limited number of blue flyers. Eventually Steven conceded the first game after his opponent's green creatures led from the front.

Steven sided out his Spore Frog for a Mirror Strike, attempting to counter the size of Dean's creatures. Steven opted to draw, and he began playing solid control creatures, playing Crossbow Infantry, Devout Witness and Waterfront Bouncer while keeping his offensive green creatures in his hand. His opponent, relying on his chain of rebels such as Ramosian Lieutenant, Steadfast Guard and Pious Warrior, was completely outclassed when Steven played his large creatures and went to town, eventually winning through breaking through his opponents defenses with Ensnare.

Steven again brought his sideboard into action, siding out an Oraxid for a Troubled Healer. Steven began again by playing some control oriented creatures and then dropped his Snorting Gahr, far superior again to his opponent's smaller rebels. Dean slowed the attack of Steven by casting Excise on Steven's Spitting Spider, but Steven again overran Dean with a number of creatures and using Ensnare to deal the final blow.

Kent was playing a similar deck to Steven, but had bombs such as Blastoderm.

Steven drew an amazing opening hand and drew into a series of great creatures, playing on successive turns Drake Hatchling, Snorting Gahr and Spitting Spider. By turn 10, he had a massive amount of creatures facing down his opponent and cast a massive Thrive on all of his creatures. Steven waited for a turn to finally attack, using his Waterfront Bouncer to bounce out Kent's Spore Frog. Steven then delivered the coup de grace, casting his Ensnare again to tap out Kent's defenders.

Steven sided out a Spore Frog and an Oraxid for a Troubled Healer and a Fountain Watch to ensure that his Spidersilk Armor was not affected by his opponent's enchantment control. After the decks were shuffled, Kent mulliganed and then opened the game with an early Blastoderm, which had Steven reeling with no answer. Fortunately, the Blastoderm was the only creature that dealt damage to Steven as his large selection of green and white fat began to take control of the game with Kent holding off the offensive with a Cho-Arrim Alchemist and a Silkenfist Order. Again Steven finished his opponent off with a judicious use of Ensnare at the end of his opponents turn to enable him to win the game and match.

Jeremy was playing a B/U/R deck featuring a rush strategy and control such as Volcanic Winds and Snuff Out.

The opening of Game 1 saw Jeremy mulligan and open the game with a sub-par selection of black and blue weenies, while Steven's flyers began the early beatdown. Steven then played his larger creatures, which enabled him to completely dominate the game and end it with his Boa Constrictor and Silverglade Elemental.

Game 2 saw Steven begin with his first slow start of the tournament, playing his first creature on turn 4. A questionable play by Jeremy saw Steven blocking and killing Jeremy's 6/6 Primeval Shambler with a Boa Constrictor enhanced by Spidersilk Armor. Once the Shambler was out of the way, Steven began to apply with his larger creatures and win on turn 9.

Match 5 - Round of 8 and Qualification Round.

Tarquin was playing a R/G deck that featured such cards as Avatar of Might and Warmonger.

Steven's first mulligan of the day saw him draw a slow hand with enough land to tide him over to his larger creatures. By turn 6, he had drawn into a number of his large green creatures and flyers and was able to apply and ignore the Avatar of Might that Tarquin had cast on his 8th turn. Steven's turn 9 saw him again use Thrive and Ensnare to tap his opponent's blockers and ride his fatties home for the win.

The last game saw Tarquin mulligan to 6 cards and was badly affected by that horror of all Magic horrors, that which is called mana screw. Tarquin did not manage to deal any damage to Steven as he completely dominated the game, countering Tarquin's attempt to cast a Blastoderm with his lone Spiketail Hatchling. Steven closed out the game AGAIN with his Ensnare and a horde of large creatures.

After dropping only 1 game during the entire grinder, Steven Campbell was the first player to qualify for the Australian Nationals through the Meatgrinders. Steven found his best card for the entire grinder was Ensnare, winning 6 games by being able to tap the blockers of the defending player and attack for the winning damage. Steven had also found during the rounds that he had made a deck construction error, putting Spore Frog in his deck over Troubled Healer. Steven was extremely pleased with his performance and is now looking forward to competing in the Australian Nationals for 2000.