Wednesday was the first day of summer around these parts. By the weekend, my bachelor igloo had completely melted. No longer beholden to my Snow-Covered Landlord, I made the trek southward, to Toronto's historic Fort York, where I went to see Canadian rock Legends (Legendary Creatures) The Tragically Hip in concert, as mandated by Canadian law. It was a great show, and I had a blast punching teenagers in the mosh pit. For whatever reason, perhaps it was the fresh summer air, the concert had me thinking of Plants. Plant Hydras to be specific. So when I got home, I set about building some decks.

There are some cards that are forever linked in the minds of Magic players. You can't mention one without mentioning the other. If you write a sentence about Niv-Mizzet, the Firemind, you'd darn well better talk about how great the Dragon is with Curiosity. How else could he have gotten so freaking smart? He's all about self-improvement. Whenever I've talked about the Santa-Claus-esque Sky Swallower, I've invariably been on the receiving end of a barrage of angry email, questioning my competence for failing to include the all-powerful Sky Swallower + Brand combo. It's a fine combo, but I don't find it terribly exciting. You end up with an 8/8 flier. Most of the other Sky Swallower combos I've written about will either win you the game immediately or one turn later. Besides, after the hundredth time of hearing about Sky Swallower and Brand, wouldn't you rather read about something new?

With this in mind, I'm going to talk about a combo that no one else has ever talked about: Phytohydra + Pariah/Pariah's Shield. Actually, numerous people have talked about this combo, including faithful readers Luis Brunson, Benjamin Nightingale, Stephen H., and Brian Mitzel. Phytohydra is immune to damage, and with one of the Pariah cards attached to it, so are you. The only problem with this is that all it does is stall your opponent until they can find an answer to one of the two cards. In the meantime, you've just got a 1/1 creature putting “pressure” on them. One of the problems with Phytohydra as an offensive creature is that your opponents have very little incentive to block it. I've tried offering them candy, flowers, and some nudge-nudge wink-wink “I wanna be in compliance”-style bribery, but nothing seems to work. Since no one will block the Plant Hydra, you've essentially played a five-mana, unblockable 1/1, which frankly isn't that impressive. To get around this, Mr. Mitzel suggested pairing Phytohydra with Lure or a Channeled Shinen of Life's Roar, forcing your opponent to block and make your Phytohydra huge in the process. Pariah's Shield would make counterattacks fruitless, pumping your Hydra up even more. It's a little on the expensive side, and pretty fragile, but it just might work. AJ Richardson, meanwhile, had other ideas. His one-mana solution to the “nobody blocks Phytohydra” problem was the Scourge common, Guilty Conscience. Now whenever Phytohydra deals damage, it will deal that much damage to itself, which will double its size. Next turn, it will double again, and double again the turn after that. When it's not growing your Hydra exponentially, Guilty Conscience acts as “removal,” either keeping the creature at bay while your opponent finds a way to get rid of it, or by destroying the creature in a suicidal attack.

So far, we have about half a deck. To fill out the rest of it, I asked myself, “What could be better than a Plant Hydra?” Two Plant Hydras! In an email, Noel deCordova regaled me with a tale of Dissension Prerelease woe. It seems that Lady Luck wasn't on his side, and he opened up Sprouting Phytohydra and Proper Burial among his Rares. Instead of bemoaning the fact that he was dealt these lemons, Noel went ahead and made some lemonade. The missing ingredient?

You will need all three cards in play, as well as any other creature (Saproling tokens will work just fine). To paraphrase Noel, “With this, you get infinite life. Sacrifice the token to ping the Sprouting Phytohydra with Blasting Station, which sprouts another copy of itself and untaps the Station. Now sacrifice the original to ping the new copy. This will give you another copy and untap the Station. This is a loop, and each time through it you gain two life. If you have Fecundity in play, you can draw your entire deck as well.” With all of this life, I decided to play a single copy of Storm Herd. It's pretty good on its own (you can reasonably cast it with all the mana from Sakura-Tribe Elder, Krosan Verge, and Selesnya Sanctuary), and it will often be an instant win if you have Blasting Station on the table. As with all infinite life combos, this one is a little cumbersome to pull off on Magic Online, but gaining twenty life is often enough.

The rest of the deck is full of tutors for most of the major combo pieces and ways to slow your opponent down. You can fetch either of the Phytohydras with Eladamri's Call, and all of the enchantments can be found (or protected) by Sterling Grove. Faith's Fetters and Ghostly Prison combine with Guilty Conscience to help keep you alive until you can get one of your combos online.

I'm certainly not immune from bombos, those sad little combos that don't actually work. The less said about my Quicken / Sins of the Past deck, the better. I was very excited about putting a Druid's Call on my Guilty Conscience'd Phytohydra (Squirrel factory!), but unfortunately this doesn't work since Druid's Call requires damage to be dealt and Phytohydra replaces damage dealt to it with the production of +1/+1 counters. Frown. The same went for Rite of Passage. Both of those enchantments can do interesting things with Sprouting Phytohydra and Blasting Station, but in the end they just weren't worth it, and besides, I ran out of room. Other enchantments worth considering are Privileged Position, Armadillo Cloak, and Pollenbright Wings.

Since I had a lot of free time at Grand Prix--Toronto, I got to see firsthand how good the Eidolon-cycle could be in Limited. On several occasions, I watched a player play an Izzet Chronarch and basically return their entire graveyard to their hand. Having an Eidolon in hand also makes the turn 2 Karoo-discard play a little more tolerable, and gives you some resilience against cards like Shrieking Grotesque or Strands of Undeath. At the same time, they can be used proactively, giving you a pretty pain-free way of fueling such cards as Kindle the Carnage and Stormscale Anarch. As long as you're playing with multicoloured spells, the Eidolons are essentially “free cards” and everyone loves free cards, even casual players.

In Constructed Magic, you can use the Eidolons to power-up a card like Odyssey Block staple Zombie Infestation. Discard two Eidolons, make a Zombie, play a gold spell, return the Eidolons, make another Zombie. You have the makings of an engine right there. All you need is a steady stream of multicoloured spells. To accomplish this, I turned to the steadiest stream of all, Planeshift's Cavern Harpy. If you have a pair of Eidolons in your graveyard, and a Harpy in hand, Zombie Infestation basically reads:

If you have four Eidolons in your graveyard, you get:

With six Eidolons, you can make three Zombies for each

you spend, and with eight Eidolons you can make four. As you can probably imagine, it gets out of control quickly.

Since both combo pieces (Cavern Harpy and Zombie Infestation) cost two mana apiece, I decided to use Dimir Infiltrator to find them. To get the Eidolons where they need to be, I included Compulsion and Stinkweed Imp to complement the Infestation. Combined with Compulsion, you can use the Imp to put five cards into your graveyard each time you spend

. Ol' Stinky is also a staunch defender, keeping all kinds of troublesome monsters from pestering you. Clutch of the Undercity is a fine gold spell, but its main appeal is its Transmute abilty. You can use it fetch extra Eidolons, or to enhance your Zombie army with either Wonder or Undead Warchief, or you can use it to find Marsh Crocodile. With Eidolons in the ‘yard, the Croc does a passable Disrupting Scepter impression, but it can also be used as a pricier Cavern Harpy substitute if need be.

Since all of the important pieces are Common or Uncommon, I decided to avoid adding any Rares to the deck except for a single copy of Unholy Grotto. It allows you to get back any dredged zombies or pull off the Gempalm Polluter trick (cycle the Polluter and while its cycling trigger is on the stack, put it on top of your library with Unholy Grotto and then draw it when the cycling resolves). It is certainly not essential, so feel free to cut it and live the Rare-free lifestyle. 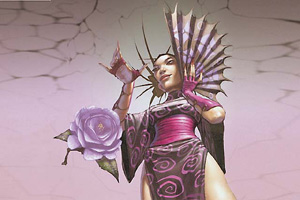 In part two of my 102 part series, Better Know Standard Tribal Wars, I'm going to take a look at Assassins. The fightin' Assassins! There are only five of them in Standard, four Humans (Kiku, Night's Flower, Royal Assassin, Orzhov Euthanist, and Nekrataal) and one Zombie (Unliving Psychopath). I'm not sure how the Psychopath became a Zombie, but according to the rumours, he accidentally assassinated himself during an Assassin's Guild hazing ritual gone awry. I'll have to check the latest Darwin Awards to be sure, though.

There are a number of ways to build an Assassin deck. You could max out the flavour by including some of the Black ninjas. (I'm pretty sure “assassinating” is part of Throat Slitter's job description.) I decided to include just one ninja, Ink-Eyes, Servant of Oni. Her ability is especially relevant here because your opponents will have a lot of creatures and you have so many ways to kill those creatures. Along these same lines, I'm using Debtors' Knell, Nezumi Graverobber, and Crime to raid opposing graveyards.

Since the format is played without sideboards, it doesn't hurt to have some general answers to problem permanents. The Punishment half of Crime // Punishment is a great answer to Snake or Saproling tokens, and it can also destroy annoying untargetables like Silhana Ledgewalker. Mortify gives this nearly mono-Black deck an answer to enchantments, while Icy Manipulator can neutralize creatures that you might not want to kill (like Keiga, the Tide Star). Of course, Royal Assassin loves a little icy manipulation, so the deck's got that going for it, too.

Until next time, look for a place to happen!