The Superest Type of All 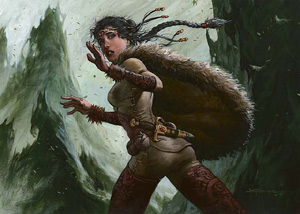 to Legendary Creatures of Time Spiral Week! As Brady Dommermuth explained on Monday, the Legends of Time Spiral (hereafter known as L.O.T.S.) are all very famous personalities from Magic's past. Some of them are brave and heroic, some of them are amusing cowards. One thing they all have in common is their commitment to charity. Before he was raising the dead as a necromancer, Lim-Dul was raising funds for various causes. His latest project, the 2007 Legends of Time Spiral Calendar, just came out. I got my copy in the mail the other day. It's extremely cool, even if it means I have to stare at Saffi Eriksdotter for the entire month of December. What a bummer.

Before I look at some of the other L.O.T.S., I'd like to very thematically flash back to last week. I've never been a part of any deckbuilding challenges before, and I have to say, judging these things is hard! There were over 150 decklists submitted. After going through them one by one, and making notes of the decks that I thought were particularly interesting and playable, I narrowed the initial 150 down to...thirty-one! At a rate of five decks per week, I'd be covering Dralnu until the New Year. We'd all be sick of the Lich Lord by then, so I'm going to do something different instead.

When I announced the contest, I explained that after all the submissions were in, there would be a vote and I would choose a winner from among the top vote-getters. I did that last week, and Phelios_san's R/B/u Goblin-Storm deck came out on top. I also promised that, even though there would be a vote, I would throw democracy out the window and select the winning deck based on my own whims because I'm crazed with power. Also, WizO Althalus told me I could. With that in mind, I'd like to defenestrate the democratic process and show you two more Dralnu decks that I thought were particularly inspired.

The first one comes from Matopi. I picked it for two reasons. It's completely off-the-wall, and of all the submissions, I think Matopi's deck comes closest to making Dralnu, Lich Lord absolutely necessary for victory. You can win without him, but it will be very difficult.

While a good deck can be hard to find, an entertaining description of good deck is even more elusive. Here's what Matopi had to say:

"It's none other than a Dralnu Coalition Victory deck! You stall with Darknesses and Wall of Roots and Supply tokens, all the while taking advantage of an ample suite of mana-searching. Once you get Dralnu online, the deck gets to recur all those tricks - play Darkness all over again, dig up mana all over again (important for a Coalition Victory), and so on. And hey, now that you've lulled your opponent into playing too many weenies with all those frustrating Darknesses and Walls, Fiery Justice as much as you want. You don't care about their life total. Give 'em 5 life. Heck, give 'em 20! Incidentally, what's the cheapest, most efficient, most fun removal you can ever play with? The answer: flashback-able Fiery Justice. For RRGGWW, you get 10 points of damage you can deal anywhere. Do you know how much mana that would take with Meteor Shower?

"With Dralnu in play, those Supplies in your graveyard turn into Demands - and what can we demand? Tamanoa, who pairs with best bud Dralnu to give us creatures of every color, and Coalition Victory for the win! It's foolish, it's fun, and it gets wrecked by Moonlace. There's gotta be some style points for that."

Indeed. Matopi's got style points coming out the wazoo (or is it the yin-yang?)! Either way, style points carry some serious weight here at House of Cards, so Matopi wins a prize. I decree it! Or something.

The second deck I'd like to highlight comes from AzureAngel13. There are a number of reasons for this. One, AzureAngel13's deck is heavy on the green, and I happen to think that green is the Unyaro Bees knees. Two, the deck is one of surprisingly few that used the flashback-friendly Catalyst Stone. Dralnu can give your spells flashback. Catalyst Stone reduces flashback costs. There's so much synergy between the two cards, but only a handful of people thought to combine them. I'm awarding AzureAngel13 (Shelkin) brownie points for going green, points for thinking inside of the box by using Catalyst Stone, and, most importantly, points for thinking outside of the box by taking a unique flavour-based approach to the contest. First, here's the deck:

As AzureAngel13 explains: "I decided to tell a little story through my deck. The first game mimics what Dralnu did the first time we saw him. He tricked the metathran and Gerrard into thinking he was good in order to accomplish some fiendish goal. This time Dralnu's guise is that of an Avatar of the Forest, leading bears, snakes, and saprolings to victory. He does this through the help of an enchantment that conceals his true identity. When it comes to the second stage of his plan (game 2) it is clear what his true plan is: to set free ancient behemoths for his own personal gain (to smack the opponent around a bit I'd say)."

Life from the Loam is key. Not only does it allow you to fill your graveyard with spells (by dredging) so you can flash them back with Dralnu, but it also provides nearly endless fuel for Saproling Cluster. After sideboarding, you can also dredge your huge monsters and then Zombify or return them to your hand with Recollect.

Congratulations to Matopi and AzureAngel13! A WizO will hunt you down and administer your prize!

You got any of that beer that has pebbles floating in it...

Obviously, I couldn't stop there. Dralnu is cool and all, but there are many more exciting L.O.T.S. Most of them are quite Johnny-tastic, but all of them are positively dripping with flavour. Seriously, you should probably get a mop and bucket before proceeding. There's gonna be flavour all over the place.

Mishra, Artificer Prodigy produces artifacts two at a time, hinting at his future as a factory owner. With the help of a little removal, Lim-Dul quickly turns your opponent's forces into an undead army fighting on your side. Norin the Wary's world-famous cowardice is translated brilliantly from flavour text to game text. Endrek Sahr, Master Breeder is a card as well as a biography. (Check out Bennie Smith's feature article from last week if you want to see some cool decks that use the Thrull-loving mad scientist.) And who could possibly forget Stonebrow, Krosan Hero, the powerful centaur warrior who is famous for...what exactly? Brady Dommermuth says that Stonebrow was Kamahl's trusty steed, or sidekick, or something. I'll take his word for it. All I know is that Stonebrow loves axes. Look at the size of that thing! For a horse with a beard, he'd make a heckuva lumberjack. He could chop the trees down and drag them out the woods by himself. Look out, Krosan forest!

Let's put the flavour aside for a minute and talk about the card. Stonebrow is a multicolour Fangren Hunter who pumps up your attacking tramplers. This means that Stonebrow attacks as a 6/6 and he provides a little Overrun effect if he's got some other tramplers by his side. I'm a big fan of Overrun (and, by extension, overkill), so I'm going to want to have as many trampling creatures as possible. For the creatures, I'm going to turn to the Thallids and their fungal offspring, Saprolings. The Thallids can pump out tokens, they can help you win the New Jersey State Championship, but one thing they can't do is trample. I'm going to fix that. Since Stonebrow seems pretty Gruul to me, I'm going to combine him with their signature artifact, the Gruul War Plow, to give all of my little Saprolings trample. As Defiant Elf amply proved, everyone loves 1/1's with trample. There's no flavour disconnect at all. If you don't have a War Plow handy, Skarrg, the Rage Pits provides you with another way to grant trample, albeit to one creature at a time.

Note that Stonebrow will pump up creatures with trample even if he doesn't attack. When I first saw the card, I thought his ability only triggered when he attacked. The printed version is much better, since it allows you hold Stonebrow back while you send your Saprolings on suicide missions if your opponent controls, say, an Ohran Viper.

I threw in a single copy of Verdeloth the Ancient because, well, he produces and pumps up Saprolings. Other one-ofs that would be fun and synergistic include Borborygmos (who "combos" with Stonebrow and is good with tokens), and the timeshifted Jolrael, Empress of Beasts (whose land-animation works well with Gruul War Plow, and works even better with both the Plow and Stonebrow).

While Stonebrow might not be well known, Mishra, Artificer Prodigy certainly is. He's such a prominent figure in Magic's history that only the handsomest devil at magicthegathering.com would dare preview him. While I covered 95% percent of all possible Mishra combos in that article, there's still some fresh ground to break. Reader Patrick Norris suggested pairing Mishra, Artificer Prodigy with Pandemonium. That's 4 damage right there! Blammo! Take that, opponent! 16 more and you're toast! To get you the rest of the way, Patrick suggested dropping out a Phyrexian Soulgorger. With both Mishra and Pandemonium in play, you can go get a second Soulgorger and blast your opponent for the remaining 16. Sweet!

Meanwhile, Egemen Tanik had a slightly different plan. Instead of using Mishra to search out a second copy of Phyrexian Soulgorger, Egemen used Crypt Champion to recur the three-mana Construct. I decided to combine the two ideas into a single deck. To get the most out of Mishra, I included twenty-four artifacts. I added both Chromatic Star and Prismatic Lens to fix or accelerate your mana. The cantripping Chromatic Star and Mishra's Bauble, as well as the transmutable Clutch of the Undercity, will help you find your combo pieces. Phyrexian Ironfoot is an inexpensive defender, and Serrated Arrows can mow down one-toughness creatures all day long, or four times, whichever comes first. The deck can be a little slow to get going, but it has a very explosive late game.

Until next time, enjoy some legends this fall!