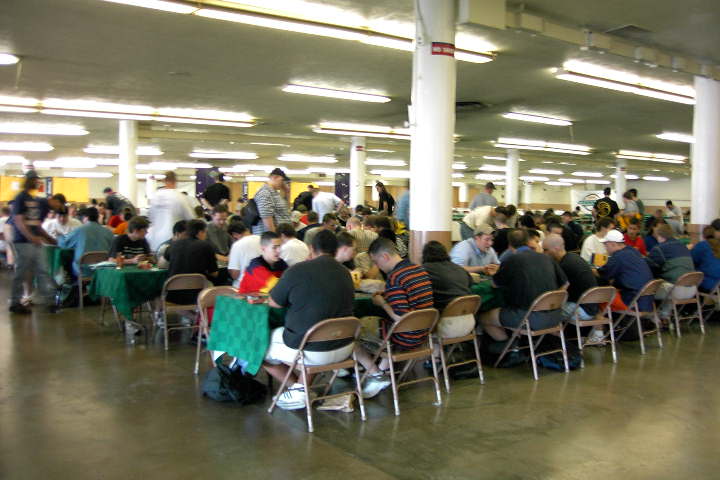 Team AlphaBetaUnlimited.com hopes to come out on top of the 163 teams in Columbus.

Team AlphaBetaUnlimited.com is broken. Their finishes in the last 5 big money team events are sick - 1st, 1st, 1st, 2nd, 1st! That's insane! They've won 2 Grand Prixs and a Gateway and a Masters Series, dividing up $72,000 in the process. (And that's just in team events.) The original Ryan Fuller, Chris Benafel, Noah Boeken lineup has varied a bit during this Grand Prix season with Dave Williams sitting in on both the GP winning teams. Williams and Benafel have teamed up with Player of the Year Bob Maher for Grand Prix Columbus and they seem quite confident as I watched them build their sealed decks.

You could tell right away that they take things seriously. When deck construction time began, they each paused to write their name and DCI number onto their deck registration sheets before even looking at the card pool they had been dealt. Of course, they were also clearly having fun. When hey did dive into the bag of cards, they excitedly thumbed through them announcing the good cards. Their biggest collective cheer was reserved not for the Ghitu Fire or the Tsabo's Decree, but for the foil Phyrexian Arena. They've already started making money this weekend.

Dave Williams quickly started double-checking the registration sheets. Benafel was starting to divide the cards up into colors, but Williams chastised him saying "This is not Asia, where people are meticulous. This is the U.S. and their name is the Spastic Monkeys." It turned out the Spastic Monkeys had indeed registered everything properly and soon ABU was dividing their card pool by color. They went through each of their six piles (they treated gold as one color at this point) and divided the pile into playable cards and "junk". The gold pile then determined their direction. Only one card (Cloud Cover) went into the junk pile and the rest were divided by color combination, resulting in 10 piles.

Red/black immediately leapt out as an obvious build. There were two Shivan Zombies, a Terminate, and a Smoldering Tar in the gold pile plus they remembered having seen two Soul Burns. When they started lining it up they also saw two Caldera Kavus and the deck pretty much built itself. It took Williams no more than 15 seconds before he announced that he had too many good cards and started throwing cards at his teammates. Ghitu Fire went it Bob's general direction while Ravenous Rats, Exotic Curse, and Tsabo's Decree flew at Benafel.

Benafel was building black/blue with a touch of white. Black/blue was another somewhat obvious build given that their gold cards included two Cavern Harpies, Recoil, and Urborg Drake. With two Angelic Shields and a Dromar's Charm available, along with two Coastal Towers to make the mana work, Chris knew right away that he would be splashing white.

That left Maher with everything else. "Everything else" turned out to be a green/white deck with enough mana fixing to run their best Apocalypse gold cards. AEther Burst, Captain's Maneuver, and Squee's Embrace all wound up in his deck along with the obvious Armadillo Cloak, Llanowar Knight, and assorted green monsters. Bob decided to run two Quirion Explorers and a Harrow, but neither of the two Primal Growths or three Chromatic Spheres he had access to. His theory on Chromatic Spheres is that "you can't cut land for them, so you wind up cutting spells and then you just cantrip into the rest of your land." Bob seemed distressed about not having enough creatures so they searched their junk pile and their assorted other cards. They came up with an Attendant and a Rampant Elephant, each of which went in. He only wanted to splash red so he couldn't really use any of the creatures from Williams' amazing black/red deck, but he did run Ghitu Fire.

Now it was time for fine tuning. Williams and Benafel agonized over each black spell, trying to figure out whose deck it would be better in. Tsabo's Decree received the most scrutiny and they started speculating about who was more likely to play against a deck where they would get to name "Kavu." Since Benafel had the middle seat and the middle seat tends to draft blue-based control in the draft portion, they figured middle seat players in general would be more likely to play control in the sealed portion too. Faced with this logic, Williams immediately threw his Hypnotic Cloud at Benafel. Decree naming "wizards" can be good too so they kept thinking about that issue. Benafel didn't seem to think he needed it because he had those two Angelic Shields which could combine with Probe or Cloud to remove anything his opponent played. Maher said to him "If it was me, I'd need another removal spell, but I have faith in your running that deck." They decided to cut Opt for a Death Bomb and called it good.

Now their decks were built and they each divided their spells up to facilitate thinking about their lands. All three helped debate each deck's land count. 5 or 6 plains in Maher's deck? How many swamps for Benafel? They knew how crucial these decisions were. After that it was time to divide up the rejects into sideboards and then register everything.

All in all they had a very efficient system, a solid card pool, and they divided up their resources quite well. I'll be shocked if they aren't still playing in the main event on Sunday.