izards of the Coast is excited to announce the Grand Prix held in the San Francisco Bay Area in October will be Team Limited format.

This new three-person team format will feature both Sealed Deck and Booster Draft. Day One will be Team Sealed Deck, with each team receiving twelve Return to Ravnica booster packs to build three sealed decks. All cards must be assigned to a player's deck or sideboard during deck construction and cannot be transferred to another player during that tournament. (Players do not share main deck or sideboard cards.) Day Two and playoff will be Team Booster Draft. The rules for three-person Booster Draft are still in development.

Players will be able to earn byes as they would for other Grand Prix (Pro Club level, Planeswalker Points, Grand Prix Trials), but only one- and two-round byes will be awarded for the Team Grand Prix. More information on byes will be announced in the coming months.

In other Grand Prix news, Grand Prix Charleston—originally scheduled for September—has been moved to November 17–18. The Grand Prix originally announced as Grand Prix Los Angeles (May 26–27) has been renamed Grand Prix Anaheim.

Starting with Grand Prix Atlanta on June 30, the alternate-art promotional card is changing to Lotus Cobra by Terese Nielsen. This card will be given out to all players attending Grand Prix for the remainder of the 2012 season (while supplies last). 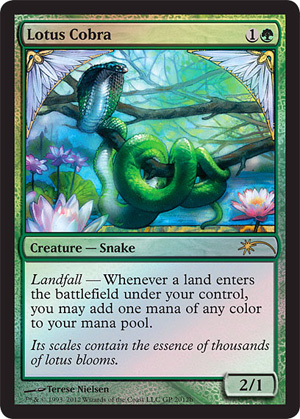 Along with the Team format, the final batch of 2012 Grand Prix formats also includes Sealed Deck/Booster Draft (Magic 2013 and Return to Ravnica), Modern, and Standard.