Team Round 1: France vs. Canada 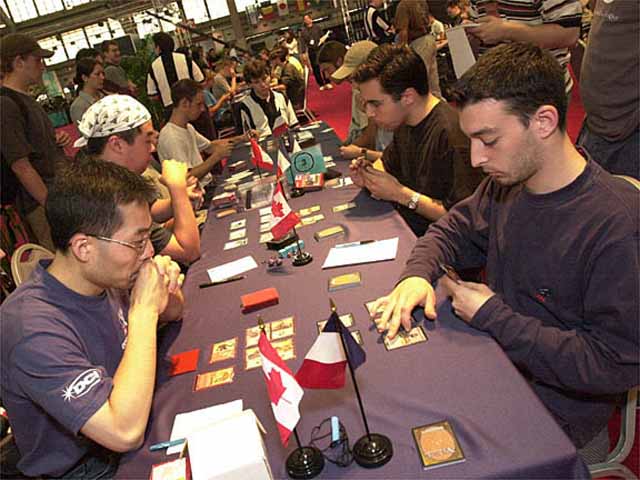 A match-up akin to England versus the US, this match-up pits a country that once ruled another. This match-up would settle, at least for this year, who rules who.

Team Canada is made up of Pro Tour veterans Ryan Fuller and Gab Tsang who have split the blue cards up, with Fuller having a Rebel deck that splashes Blue and Tsang a heavier Blue deck splashing Black. The other members of Team Canada are teen sensation, Murray Evans, sporting a Green/Black fatty deck and Sam Lau who has Red/Black. It's interesting to see Canada split the Black cards three ways, but they did it because it wasn't deep enough on its own and filled holes in their decks (Sam has Snuff Outs, Gab has Cackling Witches and Murray has some Mercs).

Team France is led by National Champion Yann Hamon, who had top 32 finishes in the last two Pro Tours, and is playing a heavy Blue deck that splashes white. Frank Canu is considered by many the second best player on the team and has a Rebel deck with Red support. Underrated Alexis Dumay has his signature Red/Green draft deck the same colors he used to smash my face in the Swiss. The always loud and entertaining Michael Sochon completes the team with a mono-black Mercenary deck featuring a LOT of removal.

I chose to focus on the Fuller/Hamon match. Fuller is off a hiatus and trying to make a comeback. He doesn't know the cards very well but is learning quickly. Hamon is likely the best player in France and on the verge of breaking out globally. He needs a top 8 to really get the recognition he deserves.

Game 1 was a marathon. Fuller started fast with Steadfast Guard, Troubled Healer, Crossbow Infantry, Trap Runner and Devout Witness. Yann had all blue creatures to match the white creatures - Trickster Mage, Darting Merfolk, Ribbon Snake, 2 Saprazzan Outriggers, Spiketail Drake and Sliptide Serpent. Yann attacked with the fliers but Fuller used the Runner to shut down the Drake. When Yann begun to tap the Trap Runner with Trickster Mage, Fuller knew he had to Last Breath the Mage and did so to try to get board Control. Fuller played a Defiant Vanguard which Yann countered with the Drake. This play surprised me. Unless Fuller has multiple Gliders, that play doesn't make sense, as the only way Yann can win is through the air. Fuller then dropped a Silkenfist Order to stop the Serpent, and a Soothsaying to search for his power cards.

Then the trash talk began. Fuller mana burnt to 3, and then (while tapped out) dropped an Avatar of Hope without paying the two white mana. An argument issued and Fuller got a notice. Ryan then said "OK" and Yann went to take his turn. Fuller tried to get him a notice as well but Canadian judge Mike Donais didn't show any partisanship and ignored him. Yann played Charmed Griffin and Fuller then spent the WW to cast Avatar of Hope and a second Trap Runner. Fuller attacked with the Avatar and held off the blue flyers with the Runners. Finally Yann drew Dominate and Withdraw and formulated a plan. He would Dominate the Avatar and then Withdraw the Healer. Even with the 2 Runners, he had enough damage to kill Ryan. But the turn before he can finalize the plan, Ryan Soothsays for a Wave of Reckoning and casts it. Because of Troubled Healer he kept all of his creatures alive and all but two of Yann's creatures died. One sided Wrath of God is pretty good, and Fuller with about 15 minutes on the clock left went up 1-0.

Murray Evans was against Canu. While Murray played many fat green creatures in game one he couldn't outrace chump blockers and Negotiations.

Gab Tsang stole game one from Alexis. Gab started the beats with Flyers and was in great shape until a Spitting Spider from Alexis killed them all. Alexis had a couple fat creatures but was low enough in life that the Bouncer/Jolting Merfolk combo killed him.

Sochon also stole game one from Sam Lau. Lau looked to be in great shape with Scoria Cat and Cinder Elemental, but Sochon got the Highway Robber/Undertaker combo going and drew Rathi Fiend for the last three damage the turn before the Elemental would kill him.

Murray came back strong in game 2. It looked like he would get swarmed by Rebels and lose to straight. But he drew Ascendant Evincar that totally turned the game around.

Alexis won game two against Gab. It looked like Gab would triumph until Briar Patch showed up which slowed him down too much. Magistrates Veto allowed a Blastoderm to hit twice which was decisive.

Sam won game 2 with fat red creature beats. It looked like Sochon would come back until Sam Specter's Wailed a Sever Soul and then finished him off with a Sniper.

So it was 1-1 in the three matches when game 2 of Fuller-Hamon began. Yann was wary of the clock and knew it would work against him. Fuller started with Rebels and used his Lieutenant to search for Vanguard and get a Trenching Steed. Yann had a fast Rootwater Commando, which was unblockable because Fuller had played an Island (he had only Soothsaying in his deck). At any time Fuller could have sacrificed the Island to the Steed to kill the Commando, but didn't catch it, being unfamiliar with the card sets. Hamon played a Pious Warrior, Windscouter and Seal of Removal. Fuller sent the Vanguard into the Pious Warrior and then cast his Wave. Yann bounced his Commando and replayed it and a Barrier. Fuller kept searching out Rebels and build enough defense up to run the clock out.

Hamon is angered by the game not finishing, as it looked like he had a shot to win with the Islandwalker, assuming Fuller didn't catch that he could sacrifice his islands.

Sochon took game 3 with fast Mercenary beats and three removal cards. He left Sam with just a Mogg Toady as he served with his Mercs.

Murray got Ascendant Evincar game 3 and was in control. Frank searched out a Thermal Glider to thin his deck out and Murray called Donais to say it was stalling. The French argued that he was thinning his deck. Then Canu ran two minutes off the clock during a complex block and was able to get the draw for France.

Gab Tsang was also in a losing situation when time was called. Gab was able to stall with his bouncer and hold Alexis off from winning.

Judges were heavily involved throughout and you could tell there was some animosity. I'm not sure if it was truly a Canadian/France rivalry or just good old Magic fun, but it was entertaining to watch.

So the match ended even with one win, one loss and 2 draws for each team. The scoring system gives 6 points for a win, 2 for a draw and zero for a loss. With 2 draws, and only 10 out of the possible 24 points for this round, they will lose ground on the field and move farther away from catching the Americans.