Teams Round 1: Austria vs. Germany 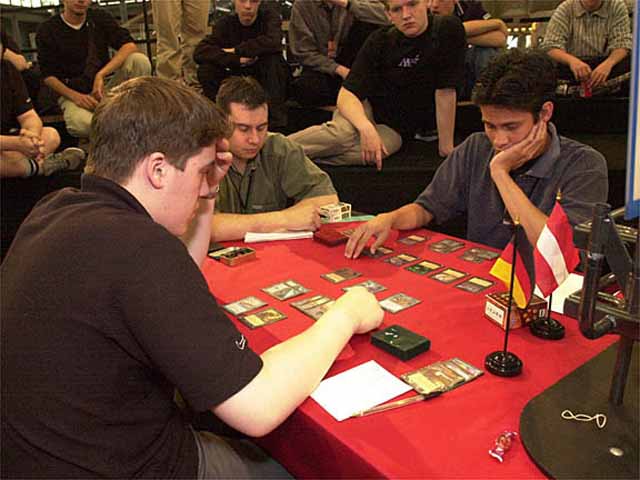 Both of these teams are packed with great Magic players, Pro Tour regulars, and two top 8 competitors for Sunday's finals. The match was going to be tough, but the Germans were very happy with their cards going into the match, and expected to do well.

Kai won the dice roll and elected to begin, and opened well with a turn 2 Bouncer, which Cetl answered with a Plague Witch. Cetl then hit 3 mana and started casting his array of Mercenaries, including Agent of Shauku, Cateran Brute and, for flying offense, a Belbe's Percher. Kai was using a Ghoul and a Chilling Apparition to soak up cards with the Plague Witch before he got his Wandering Eye, Greel combo on the table. He managed to withdraw and get use the Mind Raker to take a Rathi Assassin, and the Plague Witch. 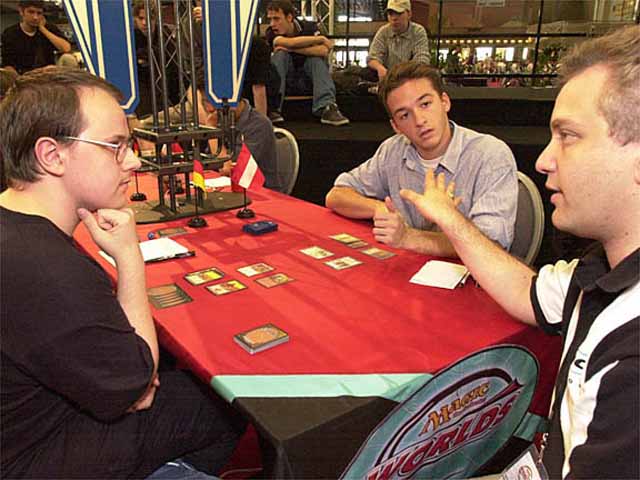 At this point it was announced that Philip Cetl had received a match loss for an illegal deck list, putting Germany 1 - 0 up. Wolfgang Eder had claimed game one in his match against Klauser, and the Summersberger - Konstanczer match was stalled with no winner obvious in game one.

At this point in the Budde - Cetl match-up, both players were drawing cards off the top of their decks, looking for some way to win. In the end the land that Cetl was drawing, in conjunction with the Agent of Shauku and Bog Smugglers Cetl manages to deal the final damage.

In Game 2 of the Budde - Cetl match, Kai has a much better start, making his own Smugglers and Spineless Thug, before Cetl even makes a Cateran Brute. Kai backs it up with an Idol and Greel and beats Cetl down in very short order.

Meanwhile in game 2 of the Eder - Klauser match-up, Eder had Avatar of Fury, Jeweled Spirit and Kyren Negotiations on the board, showing just how broken the Germans' cards were. He completed that match soon after, attacking with the Jeweled Spirit and Negotiating his opponent out.

Summersberger - Konstanczer is still stalled in game 1, and both players are thinking hard before making each move. 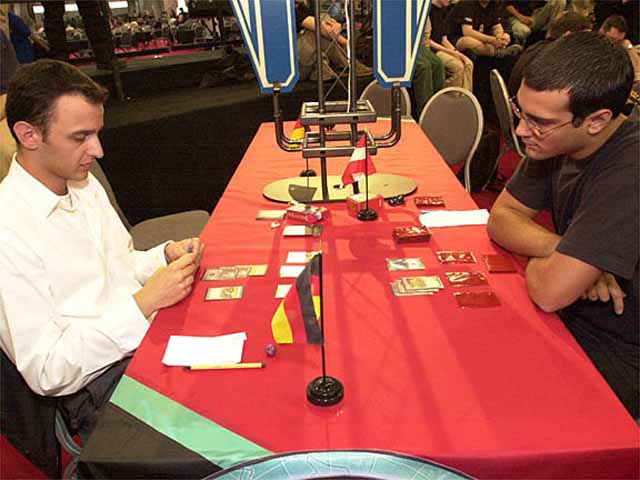 Budde - Cetl game 3, was a quick affair, with both players playing at pace. Cetl got an early searcher, and dug for his Agent of Shauku. He had answers for all of Kai's threats and just as it, looked as if Kai might regain control, Cetl top decked the Seal of Doom for Kai's Aerial Caravan, and flew over for the win with Molting Harpy.

The Germans were leading 2 - 1 at this point, thanks to the match loss, and Konstanczer had clinched game one in the Summersberger match. In game 2 Summersberger is in trouble, but can probably hold out for the draw. Instead he decided to scoop, giving Germany a shot at taking the title from the US.