Teams Round 1: England vs. Taiwan 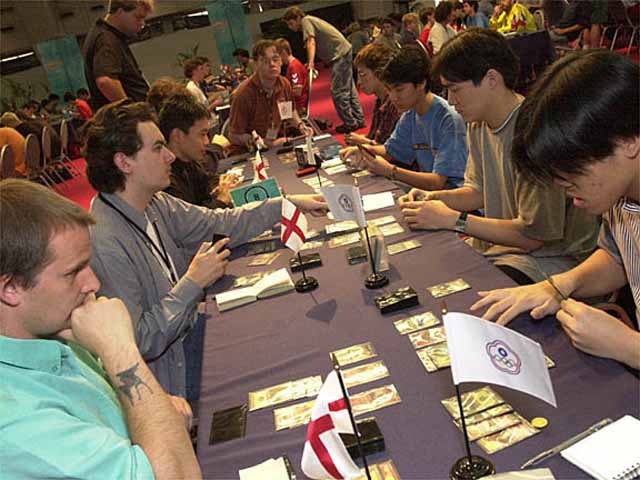 Individually the English Team performance had been mixed. One member, Ben Ronaldson, had placed in the top 32 and while Scott Wills would be taking the world standard championship plaque home, poor performances in days 2 and 3 had seen him slip to a lowly 205th. In contrast the Taiwanese performance had been more consistent if uninspiring. Most of their team finished around the 100 mark.

The English champion, Ben Ronaldson, faced off against his counterpart Doctor Wong. Playing White with a splash of Green, Ronaldson started recruiting rebels while his opponent laid mountains and began offence with a lightning hound. A Ridgeline Rager got too angry for its own good and charged in. Rather than deal with it himself a Defiant Vanguard sent for the boss, Cho Manno, to punish the beast's impertinence. The presence of Cho Manno prevented any thought of a ground war so Wong switched to politics and dropped a Kyren Negotiations. Not having a deck quick enough to race Ronaldson was in no mood to negotiate and abolished Wong's enchantment.

At this point Wills won his first game to open up a slight lead.

Ronaldson then proved there was no need to negotiate when you have a Predator, Flagship and swiftly flattened any insurrection.

In other matches Anthony Goh lost his first game and Terry Matthews was facing down a Saproling Burst.

Both Scott Wills and Vice Lin played black. Wills with splash white, Lin more two-color green. At the start of game 2 both had swampwalkers on the table, but Will's Bog Smuggler was larger than Lin's Marsh Boa. Wills had no creature to drop when Lin cast a Hunted Wumpus, but a look at Wills' hand told Lin the Wumpus was sealed to doom. Then Wills cast a Deepwood Legate for free and with six swamps on the table Lin couldn't hold it off for too long

Matthews lost his first game. Goh looked to be losing his and as Ronaldson looked strong with a swarm of creatures in play and vitalizing wind in hand the match between Terry Matthews and Lin Yous looked certain to decide whether the team result would be a win or draw for England. Both Matthews and Yous were playing Green/Red and Yous got the early advantage in the second with Cave Sense on a Kris Mage. The mage got hit by a bolt of Rhystic Lightning while Yous struggled to find a third land.

In the Matthews match Yous had found a third land and traded Laccolith Grunt for irregulars. Matthews only had a Blaster Mage but Treetop Bracers sent it over the top through the branches. Yous sent Shock Troops to bring it down in response but Matthews toughened his Mage with Tiger Claws and invigorated it to bring Yous down.

In the other remaining match Ronaldson hadn't reached enough land to use the wind until Wong had destroyed too many of his army to be effective. The game was level leaving the whole match poised.

In the third match between Matthews and Yous the Taiwanese player showed the advantage of going first by laying Kris Mage, Drummer, Venomous Dragonfly, Thresher Beast and then Deadly Insect. Matthews matches with a Giant Caterpillar and Blastoderm but he is on the receiving end of the beating.

At that moment it seemed the best England could hope for was a draw as Ronaldson had dealt with Charmed Griffin only to face Kyren Negotiations. He didn't draw an answer and Taiwan negotiated a lead.

Under pressure, Matthews blocked a thresher beast with the caterpillar and cast Flaming Sword as an instant to give it first strike. Wong discarded a second thresher beast to the Drummer to give the first +2/+2 only for Matthews to put another 3 damage on it with a Thunderclap. One Thunderclap for 2 Thresher Beast seemed a fair trade and might have turned the match but unfortunately he drew no more creatures and the Dragonfly, pumped up each turn with the Drummer, was enough to take the match for Taiwan.