Tempest on the Horizon

As the flying ship Weatherlight leaves Dominaria behind, bound for the dark plane of Rath, Magic players will themselves roaring between these two very different worlds. Tempest, the stand-alone release this fall, will introduce players to a wealth of clever new mechanics, surprising twists to the fate of the Weatherlight crew, and an imaginative new world environment. The next issue of The Duelist will give you complete coverage, but here's a sneak preview of what to expect.... 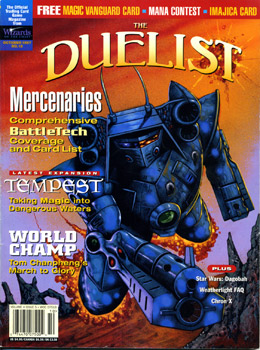 layers anticipate new rules in the stand-alone sets," says Mark Rosewater, who designed the expansion along with Mike Elliott, Richard Garfield, and Charlie Catino. Like Ice Age and Mirage before it, Tempest promises to both expand and alter the way players build decks and play cards by introducing a new mechanic called "buyback," imaginative creature types, and fresh creature abilities.

•Buyback Buyback offers players an opportunity to use certain spells more than once. When paying the casting cost of a buyback spell, its caster can choose to pay the buyback cost in addition to the spell's normal casting cost. Once the spell resolves, it goes to its caster's hand instead of the graveyard—thus allowing that player to use the spell again (and again and again).

For example, Searing Touch (a common red instant) deals 1 damage to a target creature or player for

, however, its caster can put Searing Touch hack into his or her hand—and cast it again for another

. If that player is willing to pay the buyback cost again, he or she can cast Searing Touch a third time, and so on.

"I think players will take a while to figure out proper strategies when using buy- backs," Rosewater notes. "'When Ice Age first came our, players knew that cantrips were different, and they needed some time to grasp exactly what the new mechanic meant in strategic terms. Buybacks will require similar study."

Players will have their hands full studying all the possibilities Tempest offers because buyback is only one of four variations to traditional play. Slivers, Licids, and creatures with shadow round out the set's new options.

), you can only block it with creatures that also have shadow. If none of your potential blockers have shadow, the Soltari Foot Soldier is unblockable. "Creatures with shadow," Rosewater says confidently, "are going to make Tempest sealed play a very aggressive environment."

Slivers: Think Plague Rats with a twist. Slivers share their abilities with one another, each making the others more powerful. Your Talon Sliver (a 1/1 creature for 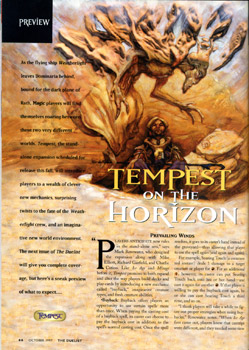 Licids: "The Licids," says Rosewater, "were made with the advanced player in mind because of their versatility and because there are so few cards in Magic that require different spells to destroy them at different times." That said, the simplest explanation of Licids is to describe them as creatures that can become creature enchantments and then, if needed, become creatures again. Consider Nurturing Licid, a 1/1 green creature: tapped and for a cost of

it can become a Regeneration enchantment on a target creature. At any time, the Nurturing Licid's controller can pay

to end the effect, making the Licid a 1/1 creature again. "Licids will make players stop and think," Rosewater predicts.

When the Ship Comes In

The Weatherlight set introduced Gerrard, Tahngarth, Hanna, Mirri, and the rest of the crew as they set out from Dominaria for the dark plane of Rath. There, the evincar Volrath holds Captain Sisay prisoner to lure Gerrard into battle. As the story continues in Tempest, the Weatherlight makes its way across Rath's twisted skies en route to Volrath's Stronghold. Almost immediately the evincar's own airship, the Predator attacks. The pitched battle that follows sets the wheels in motion that will ultimately bring Gerrard to the citadel where his worst enemy waits.

If the Weatherlight expansion is the prologue to the Weatherlight saga, Tempest (Part I of The Rath Cycle) serves as its explosive first chapter. In addition to his work on the design team, Rosewater also serves as co-author of the saga. "We have an intense air battle, a new race of goblins, a near-fatal fall, a kidnapping, a shipwreck, angry merfolk, paranoid elves, a prophecy, and a giant portal," he says. "Michael [Ryan] and I wrote this story very cinematically. There are numerous scenes that you can just imagine watching on a giant screen at the multiplex."

In addition to the new game mechanics, the Tempest story explores some of the geography of Rath as the Weatherlight approaches Volrath's stronghold. From the great forest of Skyshroud to the Death Pits of Rath, players will discover a world filled with inventive locales.

Tempest will also give players a first look at the villain of the saga: Volrath, evincar of the Lord of the Wastes. And by the end of the Tempest story, Volrath will add two more members of the Weatherlight crew to his list of prisoners.

Taking the Art by Storm 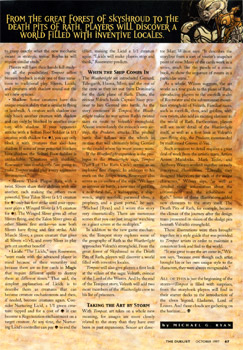 With Tempest, art takes on a whole new meaning, for images are more closely related to the story than they have ever been in past expansions. Senior art director Mart Wilson says: "It describes the storyline from a sort of tourist's snapshot point of view. Many of the cards work in a series, much like the panels of a comic book, to show the sequence of events in a particular scene."

As a whole, Wilson suggests, the art works as a tour guide to the plane of Rath, introducing players to the merfolk realm of Rootwater and the subterranean mountain stronghold of Volrath. Familiar races, such as merfolk, elves, and goblins, with new twists, also add an exciting element to the world of Rath. Furthermore, players will see more detail of the Weatberlight itself; as well as a first look at Volrath's own flying ship, the Predator, commanded by malformed Greven il-Vec.

Such attention to detail requires a great deal of workfrom the artistic team. Artists Anson Maddocks, Mark Tedin, and Anthony Waters worked together on early conceptual illustrations. "Literally, they designed blueprints for each of the major characters," Wilson says, "a well as detailed visual information about the environment and the inhabitants of Rath." Some of these illustrations added new elements to the story itself. The Death Pits of Rath, for example, became the climax of the journey after the design team presented its vision of the sludge pits beneath Volrath's stronghold.

These illustrations were then brought together in a style guide that was provided to Tempest artists in order to maintain a consistent look and feel to the world.

"It was great to see the art come in," Wilson says, "because even though each artist brought his or her own unique style to the characters, they were always recognizable."

All of this is just the beginning of the storm—Tempest is filled with surprises, from the storybook players will find in their starter decks to the introduction of the elven legend, Eladamri, Lord of Leaves. And those clouds are gathering on the horizon....